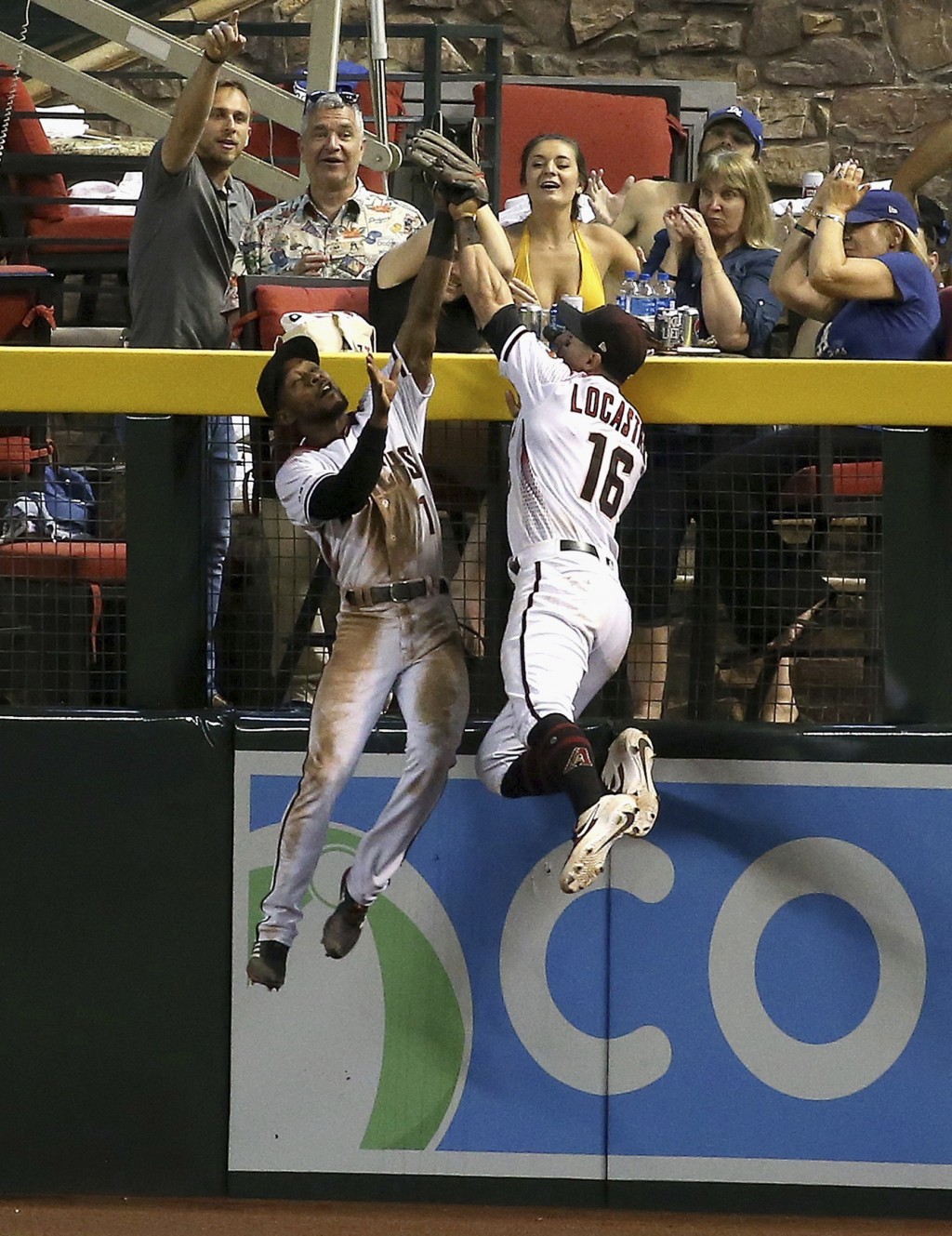 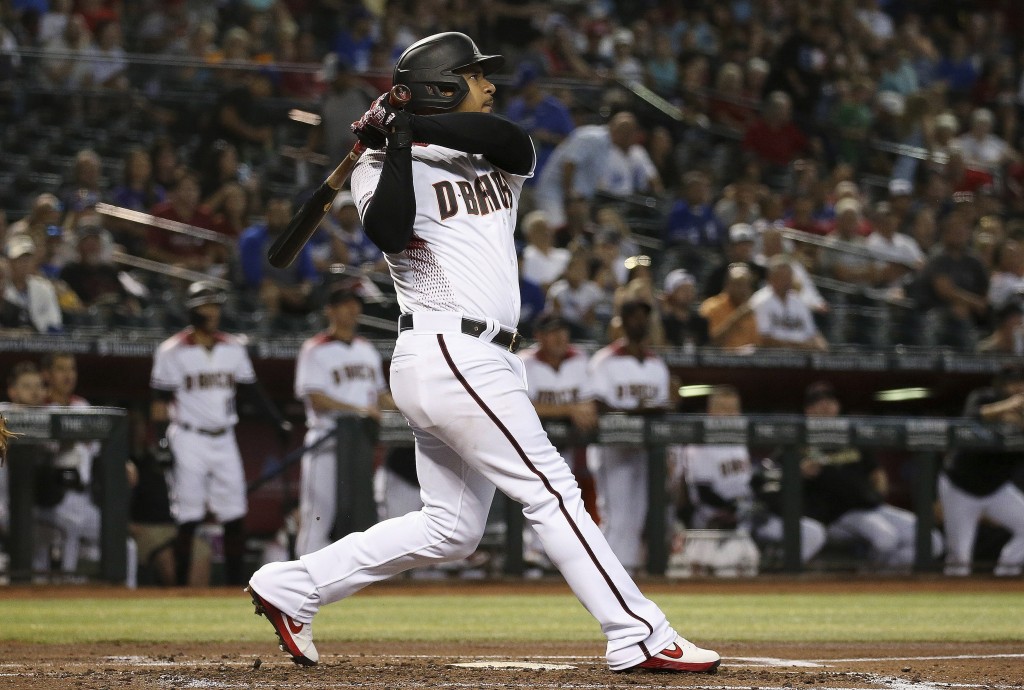 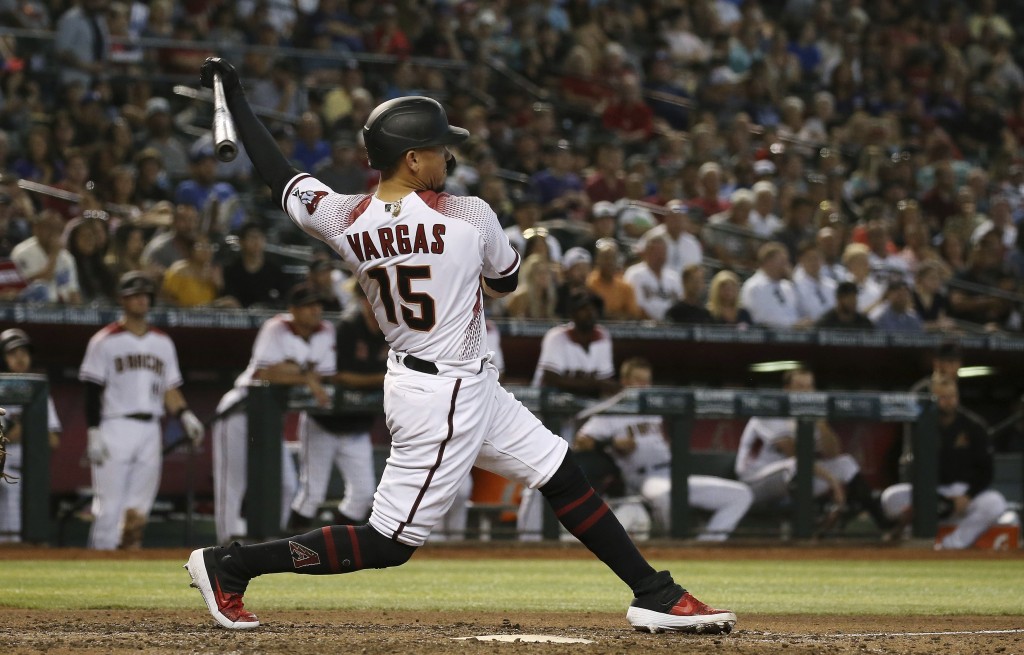 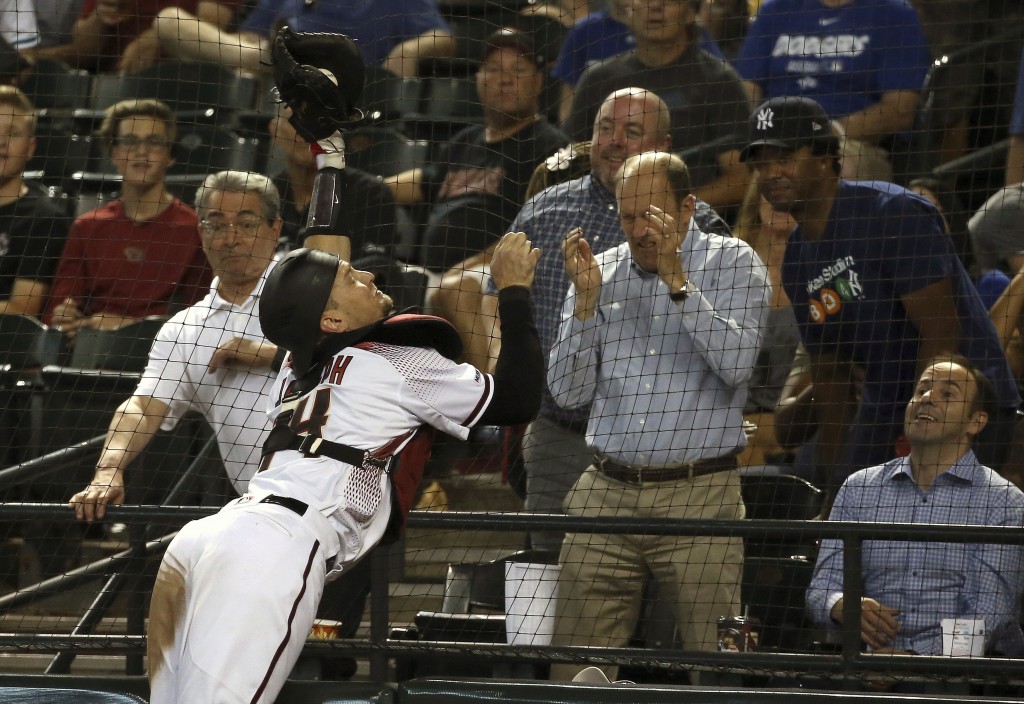 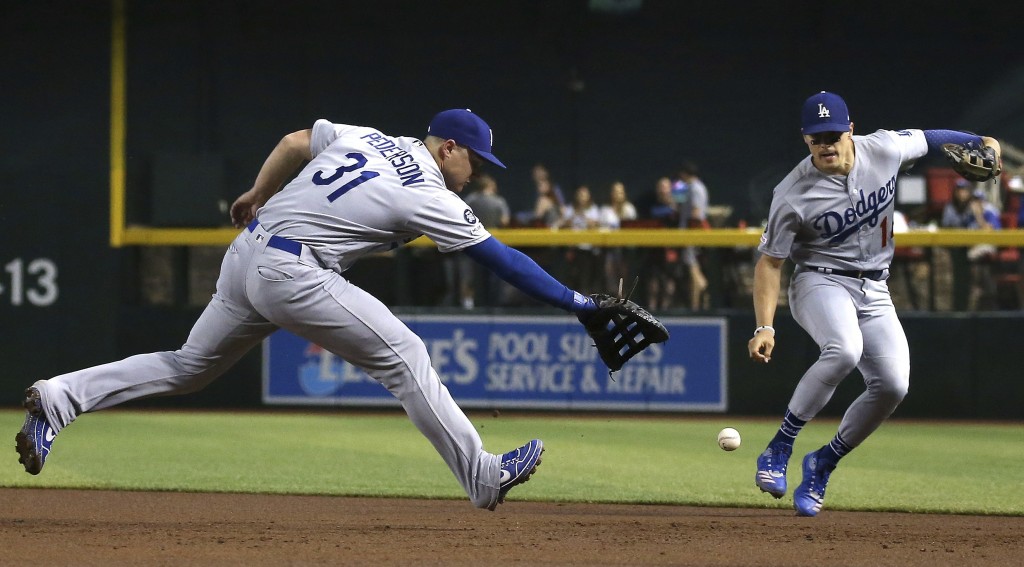 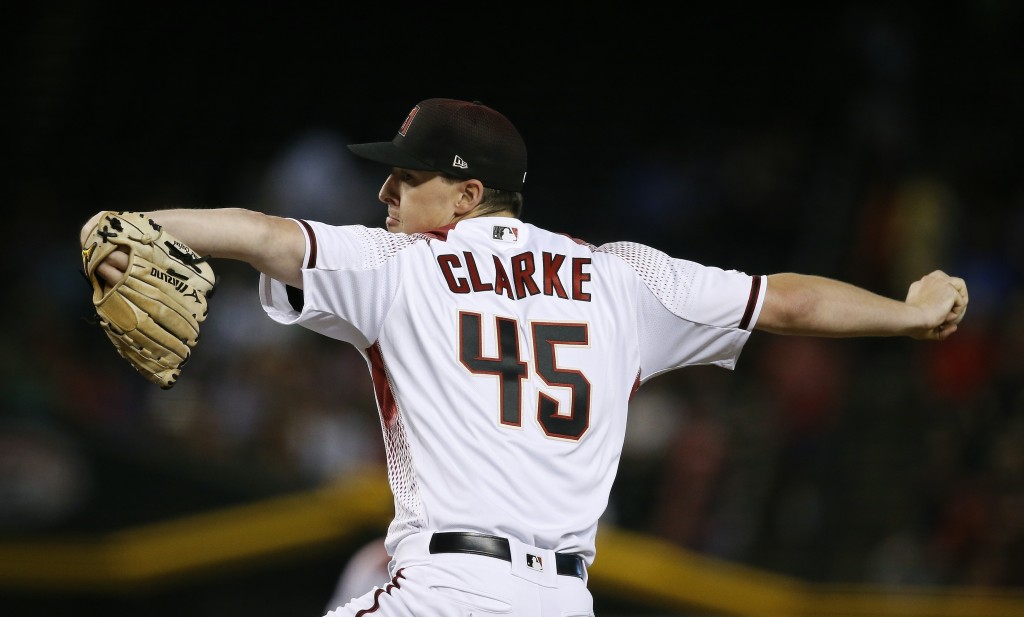 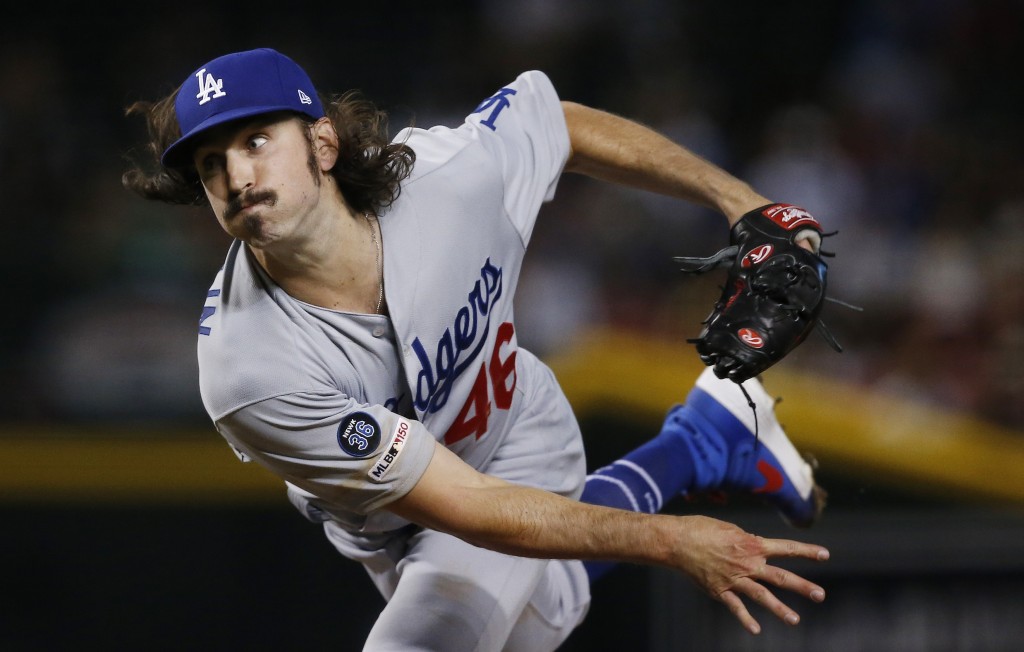 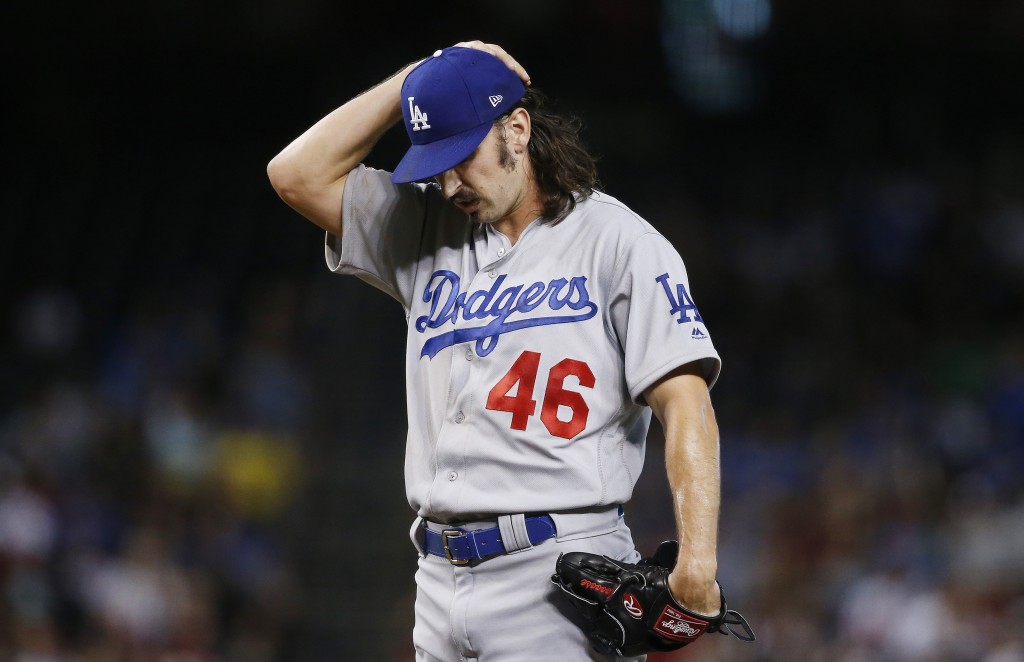 PHOENIX (AP) — The Arizona Diamondbacks figured the best approach against a pitcher in his major league debut was to come out aggressive, a plan that worked right away.

Eduardo Escobar's three-run home gave Arizona a four-run lead before Los Angeles recorded an out, and the Diamondbacks cruised to an 8-2 victory over the National League West-leading Dodgers on Wednesday.

The Dodgers, with the best record in the majors at 55-27, lost for just the second time — both to Arizona in the three-game series — in nine games, while Arizona finished a nine-game homestand 3-6.

"It was a hard-fought series after a very lean start to the homestand, and I thought our guys did a great job of rebounding, sticking together and pressing on," Diamondbacks manager Torey Lovullo said.

Jarrod Dyson had three hits, an RBI and swiped two bases to raise his NL-leading total to 19. He also had a home run-stealing catch over the right-center field fence.

"I never take my eye off the ball," Dyson said. "When we're out there, players make plays and it's our job to run them down."

The Dodgers' Cody Bellinger hit his 26th home run of the season, tying him for the fourth-most before the All-Star break in franchise history. Los Angeles was charged with three errors, two by first baseman Joc Pederson.

The Diamondbacks roughed up Tony Gonsolin (0-1) right away in his first big-league game. Dyson led off with a bunt base hit against the shift, stole second base and took third when Gonsolin didn't arrive at first base in time to get Tim Locastro out on a grounder to the right side.

Locastro stole second, then Pederson booted a ground ball from David Peralta for the Diamondbacks' first run. Escobar followed by lining a 2-2 pitch off the top of the right-field fence and into the seats for a 4-0 lead.

"We wanted to challenge him the best that we could," Lovullo said about facing Gonsolin. "It's really good coaching, and really good aptitude and trust by our players. It's not rocket science, it's just a matter of the guys knowing what to do and how to do it and when to do it."

Gonsolin, called up from Triple-A Oklahoma City for the start, was the Dodgers' minor-league pitcher of the year last season and had a 2.77 earned-run average in eight starts in the minors this season. He went four innings, allowing four earned runs on six hits.

"At times the execution could have been a little better, but I just don't think we played well behind him," Dodgers manager Dave Roberts said.

"I wouldn't say that the game sped up on me in any way," Gonsolin said. "I thought I held my composure pretty well. It comes down to just executing pitches."

Gonsolin got his first major league hit in his first career at-bat in the third, and the Dodgers made it 5-2 on Bellinger's solo shot into the camera cutout high up the center-field wall.

The Diamondbacks built the lead to 8-2 on Vargas' double in the fifth off Caleb Ferguson. Dyson avoided a jarring collision with Locastro as the two leaped for Pederson's fly ball in the seventh, which Dyson came down with.

Catcher Russell Martin Jr. pitched a scoreless eighth, including a strikeout, for the Dodgers.

The Diamondbacks reinstated one-time All-Star infielder Jake Lamb from the 10-day injured list. Lamb, a 2017 All-Star, hit fifth and played first base and went 0 for 4 with an error in his first game in almost three months.

Lamb played just five games before going on the injured list with a strained left quadriceps on April 3. He had been on a rehab assignment at Triple-A Reno. Arizona optioned infielder Domingo Leyba on Tuesday night to Reno to make room for Lamb on the active roster.

The Dodgers sent catcher Will Smith back to Oklahoma City three days after bringing him up, and the move made room for Gonsolin to be added Wednesday.

The Dodgers played a game without a young fan running onto the field toward one of their players in mid-game, the first time it hasn't happened since last Saturday at Dodger Stadium.

2B-CF Ketel Marte singled in a pinch-hit appearance on the day the Diamondbacks made a big push for votes for him to be in the All-Star Game. Marte ended the game as the NL hits leader with 100, and the players' road trip outfits were tributes to Marte's garish style of dress.

Dodgers: Roberts said he took out Bellinger before the bottom of the sixth to allow Bellinger to rest a sore knee.

Dodgers: The Dodgers open a four-game series against the Colorado Rockies on Thursday with RHP Walker Buehler (8-1, 2.96 ERA) starting on five days' rest.

Diamondbacks: The Diamondbacks head to San Francisco for a four-game series against the Giants, with LHP Alex Young set for his major league debut. Young is 2-3 with a 5.79 ERA in eight starts at Triple-A Reno.