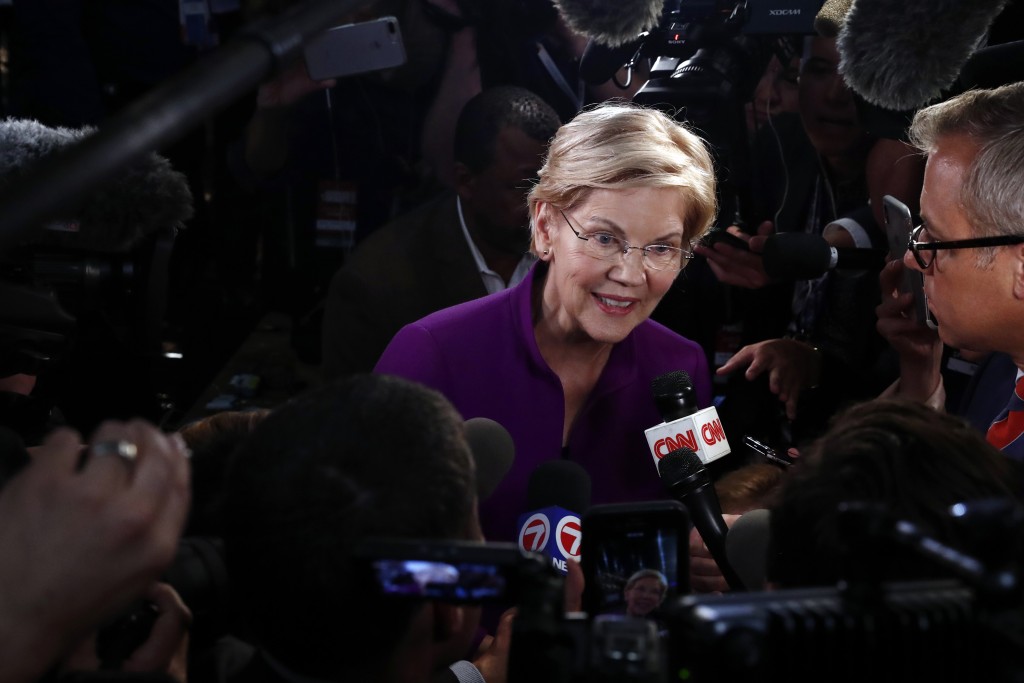 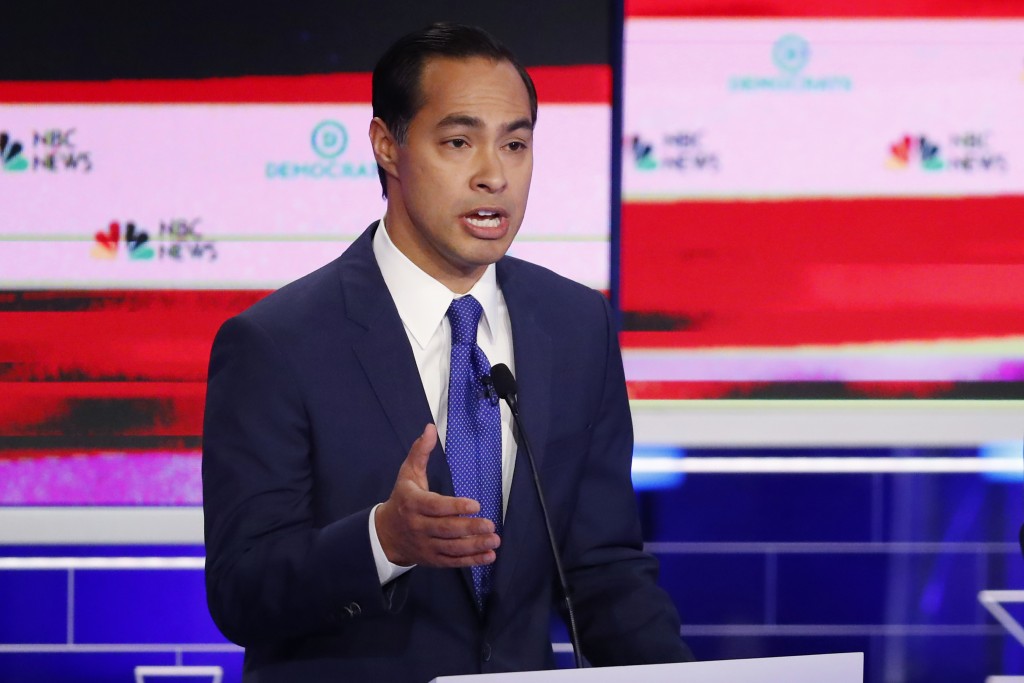 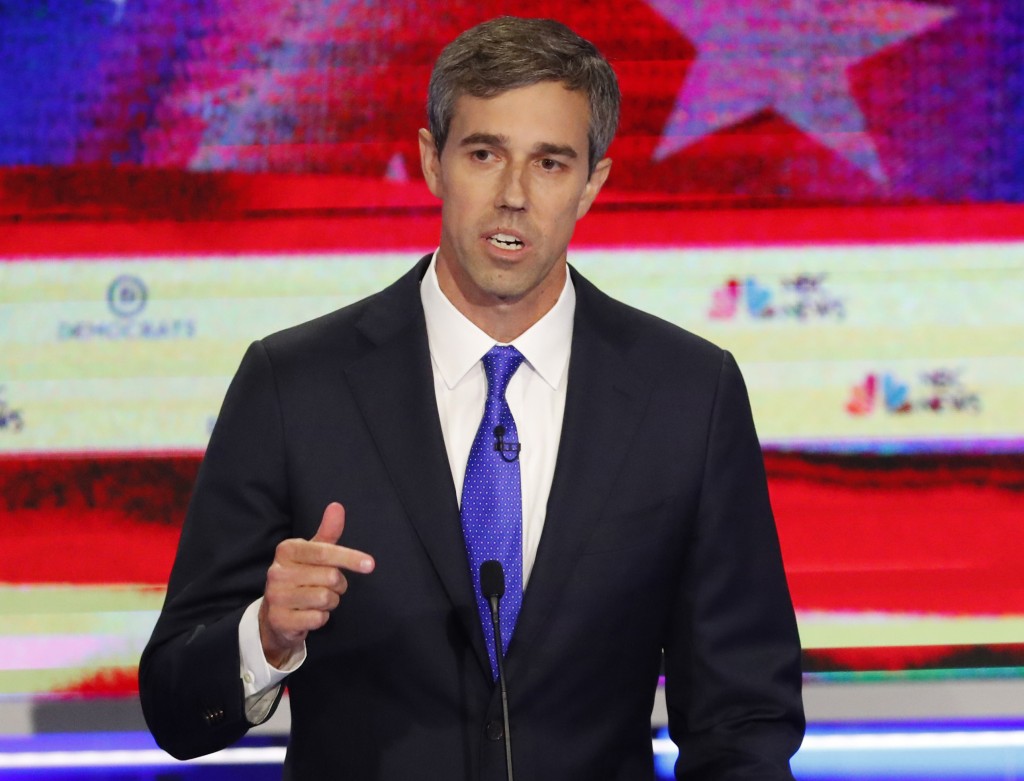 MIAMI (AP) — Democrats hoping that Wednesday night's first presidential debate of the 2020 campaign would be clarifying probably came away disappointed.

Several candidates, especially Massachusetts Sen. Elizabeth Warren, had strong moments, but there were few instances that either clearly elevated or diminished them significantly.

The sniping was mostly modulated, and the debate was notable for who was not attacked: namely, former Vice President Joe Biden, who is leading in nearly all early polls and is set to be part of the second night of debate Thursday.

The 10 Democrats in the first debate instead focused largely on issues of cultural and economic fairness, with some sharp disagreements. Criticism of President Donald Trump came late, with Washington Gov. Jay Inslee calling him the greatest threat to American security.

Warren wasn't the subject of direct criticism, even when she stood out as being one of only two candidates who said she'd abolish private health insurance.

The debate kicked off with moderator Savannah Guthrie asking Warren if her many ambitious plans — free college, universal child care and health care — would hurt a booming economy.

"Who is this economy really working for?" Warren replied. "It's doing great for a thinner and thinner slice at the top."

It was soft toss of a question to Warren, and her response was echoed by other Democrats.

Former Rep. Beto O'Rourke of Texas slammed Trump's tax cut as part of "an economy that is rigged to corporations and to the very wealthiest."

And Rep. Tim Ryan, who represents several declining industrial areas in Ohio, said, "This issue we're talking about has been going on for 40 years."

Only former Rep. John Delaney of Maryland clearly disagreed and said many of Warren's promises were not realistic.

No issue in the first Democratic debate showcased the contrast with President Trump more than immigration. But the issue also exposed significant rifts among his challengers.

Former Housing and Urban Development Secretary Julian Castro challenged his rivals to join him in rewriting immigration laws so the mere illegal entry into the United States would no longer be a federal crime.

Castro made his most pointed strike at fellow Texan O'Rourke, who notably did not decriminalize illegal migration in his own immigration proposal. "If you truly want to change the system we have to change that section" of federal law, Castro said.

O'Rourke said he wanted to keep the provision so authorities could pursue drug and human traffickers. But Castro cut him off, noting there are separate laws that could be used against those crimes, and the entire stage broke down into crosstalk and shouting. Several other contenders — including Warren, New Jersey Sen. Cory Booker and Washington Gov. Jay Inslee — have already signed on to Castro's approach.

There was more Spanish than expected. And there were appeals to the working-class voters who abandoned Democrats in favor of Trump in 2016.

O'Rourke showed off his fluent Spanish in his opening statement. Booker countered with his Spanish during a discussion of immigration, and also noted that he's probably the only candidate who lives in a poor, predominantly minority community. (Booker lives in Newark.) Castro spoke in Spanish during his closing statement and talked about saying "adios" to Trump.

New York Mayor Bill de Blasio — who noted he has an African American son — urged the party to "stop acting like the party of elites." Rep. Tim Ryan of Ohio said, "We have got to change the center of gravity of the Democratic party from being coastal and elitist and Ivy Leaguist."

Perhaps the hardest question for Democrats to answer was how the candidates would deal with a Republican. Not Trump, but Senate Majority Leader Mitch McConnell.

Republicans have a good chance of still controlling the Senate even if Democrats win the White House in 2020, and it's unlikely McConnell would allow any of the candidates' ambitious proposals on government-run health care or green energy to become law.

Warren promised she had a plan to deal with McConnell, though it seemed to center on rallying public opinion against him. "We have to push from the outside and lead from the inside," she said.

Booker proposed the presidential nominee campaign in longshot states like South Carolina in hopes of snaring enough seats to take over the Senate.

Inslee suggested eliminating the filibuster — which the president cannot do and which would strengthen McConnell's hand if the GOP remained in the majority.