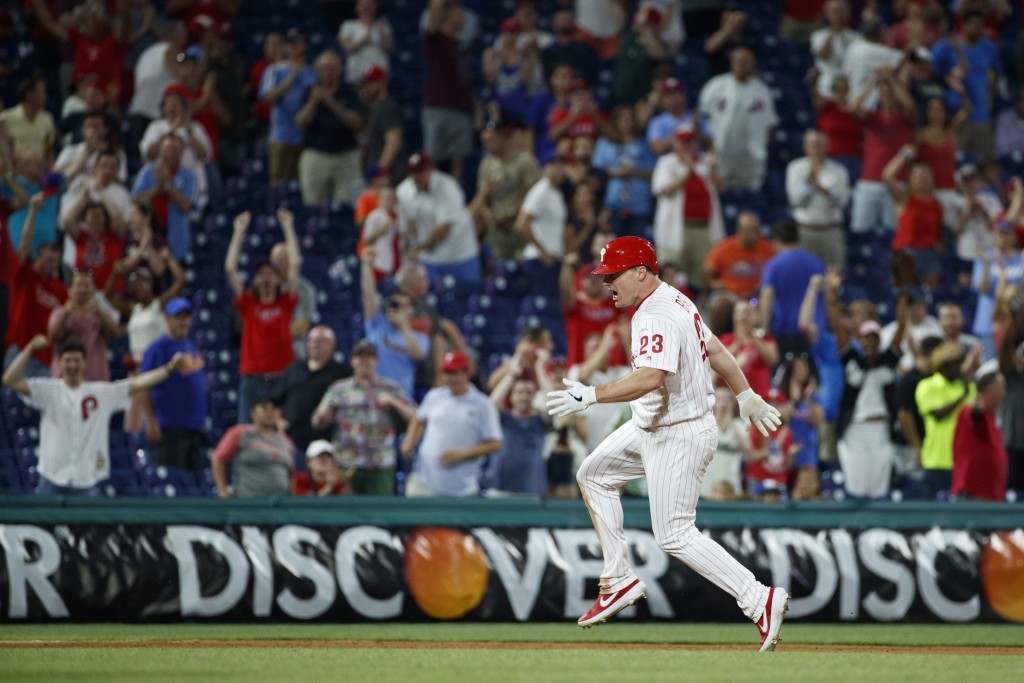 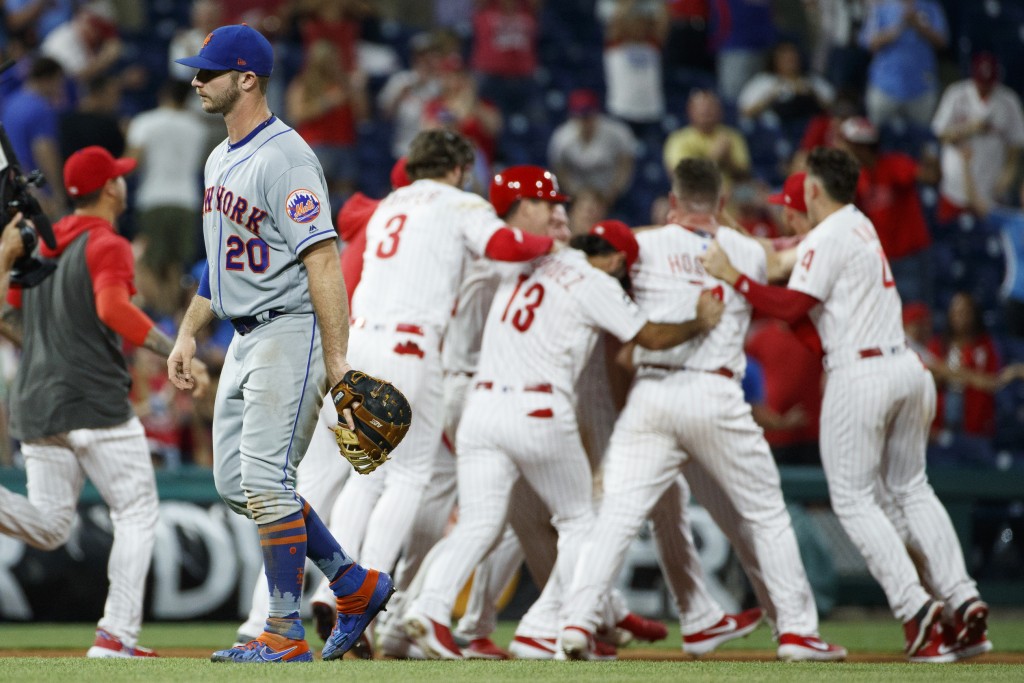 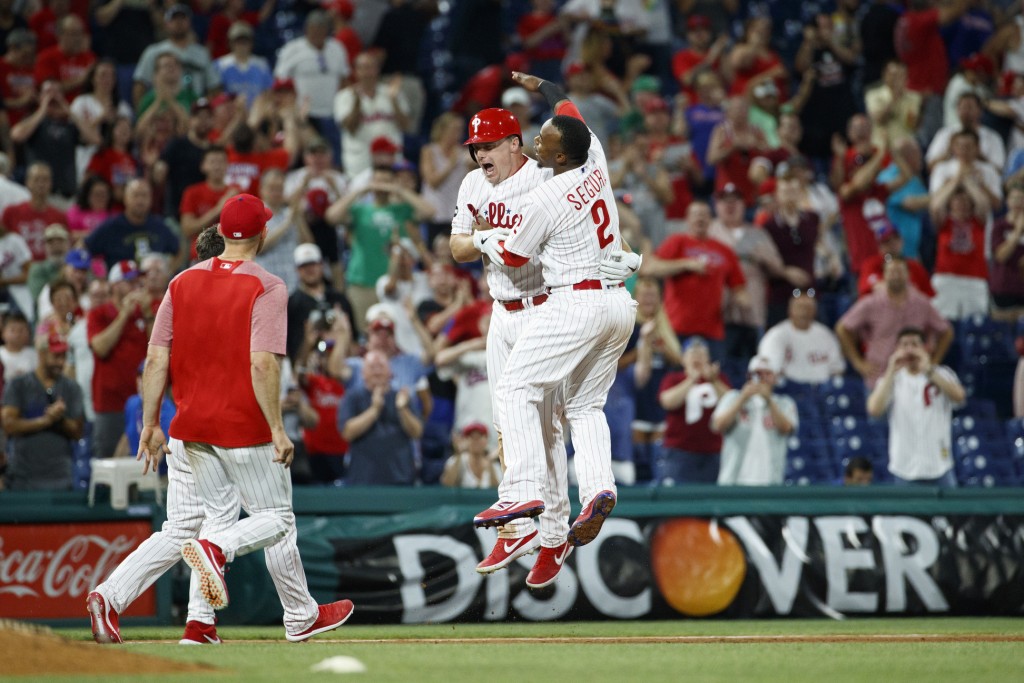 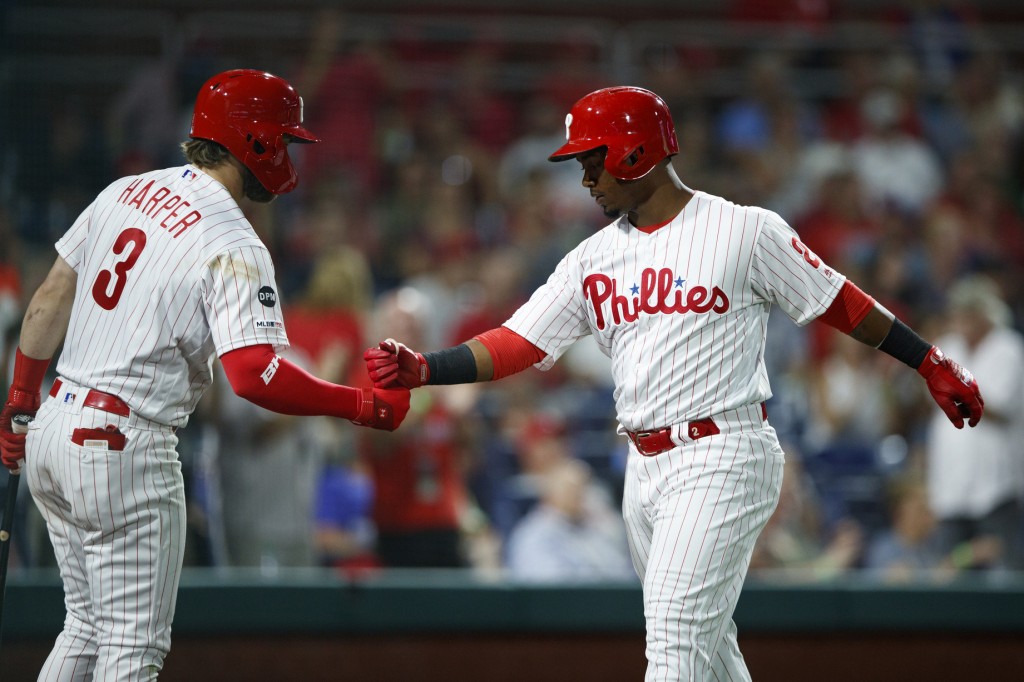 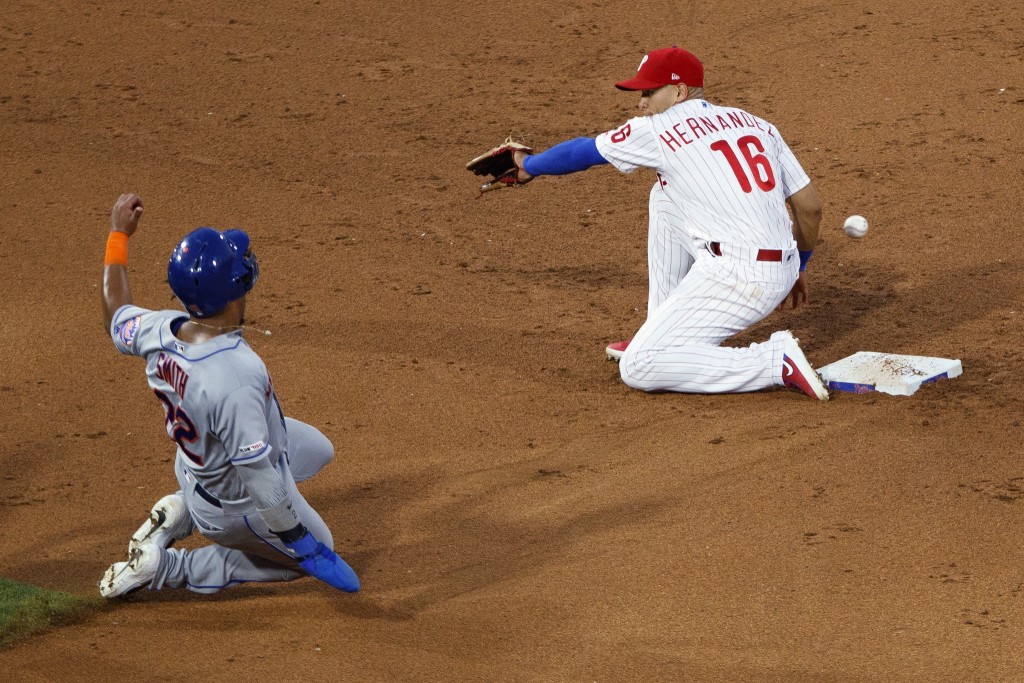 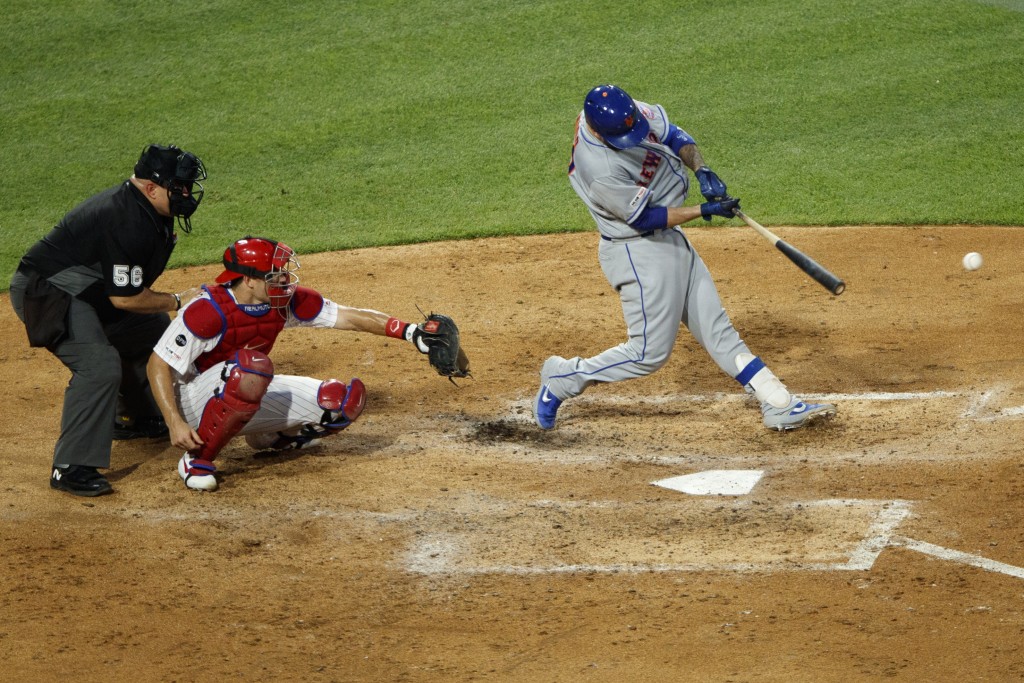 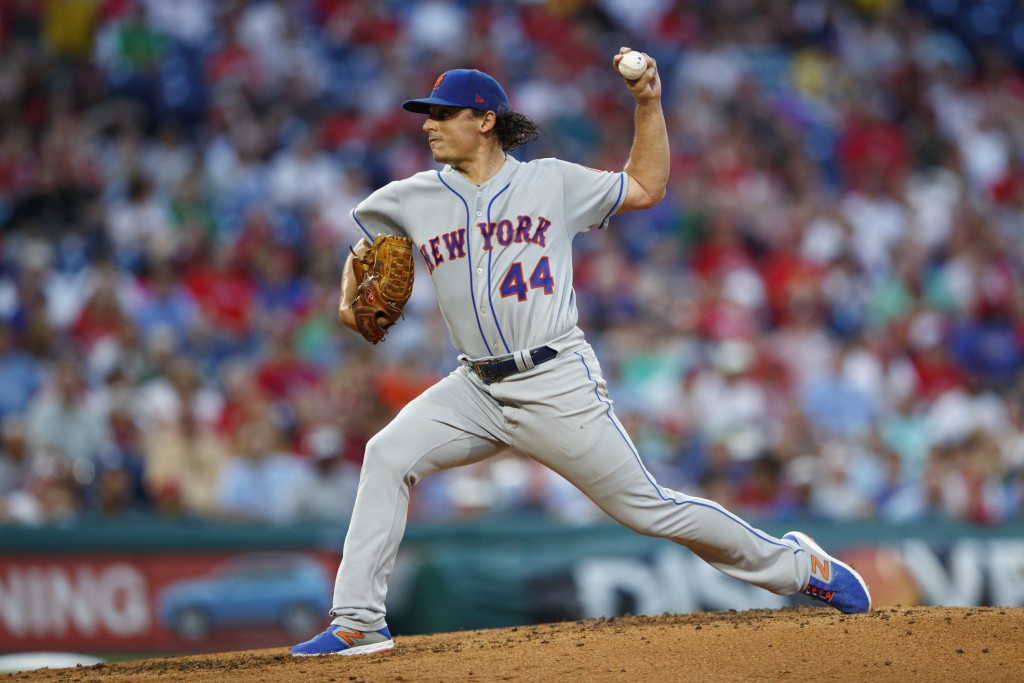 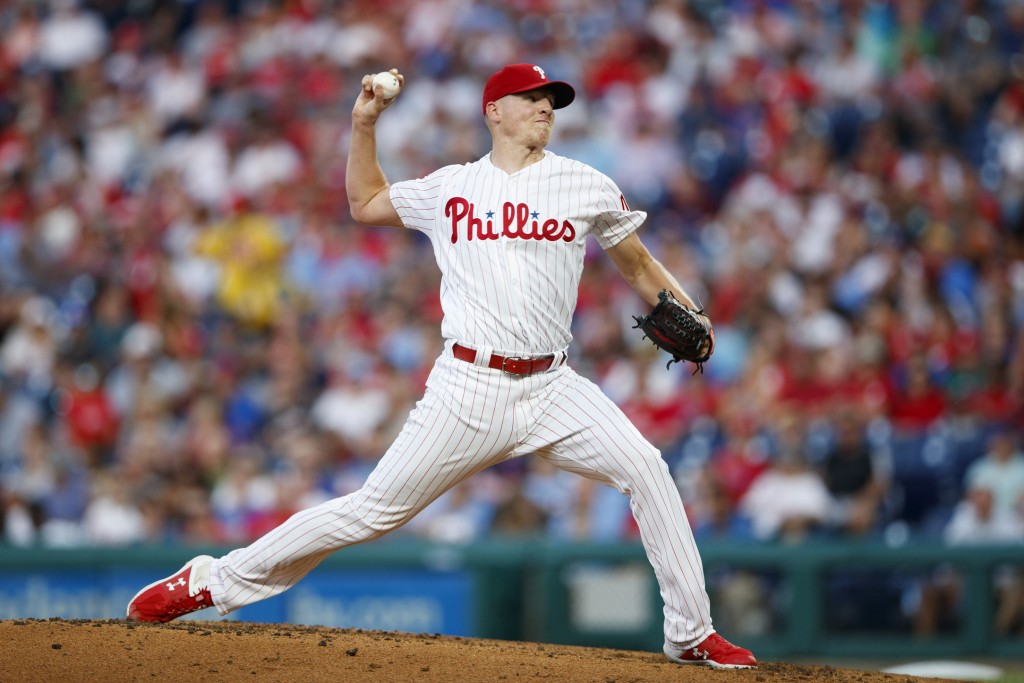 PHILADELPHIA (AP) — Jay Bruce ripped an RBI double in the bottom of the 10th inning against his former team, and the Philadelphia Phillies rallied to beat the reeling New York Mets 5-4 Wednesday night.

Mets lefty Jason Vargas tied a career high with 10 strikeouts in his first start since being fined for an expletive-filled confrontation with a reporter, but was pulled after only 77 pitches and the Phillies overcame a 4-0 deficit against New York's leaky bullpen.

Rhys Hoskins drew a walk from Stephen Nogosek (0-1), and J.T. Realmuto singled. Roman Quinn ran for Hoskins and Bruce, traded by the Mets twice in the last two years, sent a long drive over center fielder Juan Lagares' head to give Philadelphia its third straight win over New York after a seven-game losing streak.

Vargas baffled hitters with his assortment of off-speed pitches, allowing two runs and three hits in 6 1/3 innings. But he exited after Realmuto doubled to start the seventh and Bruce flied out to deep center. Cesar Hernandez greeted Seth Lugo with a ground-rule double into Philadelphia's bullpen, cutting the deficit to 4-2. Pinch-hitter Brad Miller walked with two outs and Scott Kingery reached on a wild pitch after striking out swinging.

Jean Segura then hit a tying, two-run single to right-center.

Dominic Smith and Jeff McNeil hit solo homers for the Mets, who have lost four in a row.

Vargas had to be restrained from going after a Newsday beat writer in the team's clubhouse following a loss at Wrigley Field on Sunday. He called it "an unfortunate distraction" but hasn't answered questions since the altercation.

Segura hit a solo homer off Vargas in the sixth after he retired 11 straight batters.

Philadelphia's Nick Pivetta gave up four runs and nine hits in 5 2/3 innings. He has a 4.30 ERA in six starts since a brief demotion to Triple-A.

Smith gave the Mets a 1-0 lead in the fourth on his seventh homer and third in three games. He drove a 1-1 pitch the opposite way into the left field seats. McNeil led off the fifth with an opposite-field shot to left-center to make it 2-0.

The Mets chased Pivetta with two runs in the sixth. Tomas Nido lined an RBI single and McNeil drove in a run with a double.

The Mets selected right-hander Chris Mazza's contract from Triple-A Syracuse. He was 3-5 with a 3.59 ERA over 12 starts in the minors. RHP Walker Lockett was optioned to Syracuse and left-hander LHP Ryan O'Rourke was designated for assignment.

Mets: RHP Noah Syndergaard is expected to return from the injured list and start Sunday night against Atlanta after striking out nine in a rehab start for Class A Brooklyn on Tuesday. He has been out with a strained right hamstring.

Phillies: RHP Tommy Hunter could join the bullpen in Miami this weekend after one more rehab appearance. He has been sidelined all season with an elbow injury.