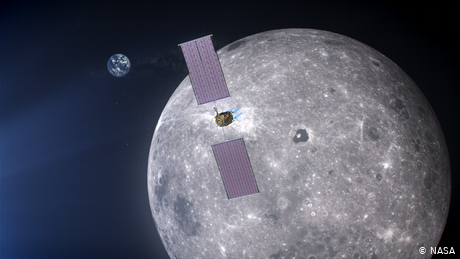 Defending the land, sea and airspace of NATO members may soon no longer suffice. At the organization's Brussels summit this week, NATO defense ministers have for the first time ever discussed branching out into space defense.

NATO Secretary General Jens Stoltenberg has previously insisted that "we do not want to militarize space." Instead, NATO now says it merely wants to get an "overview" of the current situation.

The alliance says that today, conflicts are being fought on unconventional battlefields, such as the internet — or one day, even outer space. That's why it is now looking into what space defense could entail. The alliance says that there is the danger that nations may station weapons in the Earth's orbit, or directly attack satellites. Indeed, diplomats say satellites play an important role not just for military purposes but also in civilian life. Moreover, NATO is concerned it could lose its technological advantage over China or Russia.

Read more: NATO at 70 — bringing its values to the table?

NATO: A coordinator of space capabilities?

The alliance wants to be prepared for all possibilities, though Stoltenberg also said the next step would merely entail taking stock of the technological abilities that different NATO member bring to the table. The alliance, therefore, sees itself more as a coordinator and does not seek to develop space capabilities of its own.

The United States, China, Japan, Russia and most recently India have been honing their technological capabilities to shoot down enemy satellites. So far, no effective means of thwarting such attacks are known. This is one of the reasons NATO has now put space defense on the agenda.

The current summit, taking place Wednesday and Thursday, is about open dialogue. A decision on a possible space defense strategy may be announced in December, when various heads of state and government converge on London for another NATO meeting. But there is no guarantee a final decision will be reached then.

Russia in violation of INF treaty

NATO remains deeply concerned over Russia, and is preparing for the end of the Intermediate-Range Nuclear Forces (INF) Treaty, which bans nuclear-armed, land-based mid-range ballistic missiles.

"The odds of Russia returning to INF compliance are getting slimmer by the day," Stoltenberg said at the beginning of the summit.

How will the alliance respond to this? Stoltenberg says "Russia's SSC-8 mid-range missile poses a serious threat," adding that these cruise middles can be armed with nuclear warheads "and can reach European cities in minutes."

Time is running out. On August 2, Russia's six-month compliance period comes to an end. If it has not returned to honoring the INF treaty by then, NATO has vowed to act.

The current meeting is also about what, exactly, the alliance intends to do in this case.

Read more: Is NATO's future at risk over US-Turkey rift?

NATO insists it does not want to mirror Russia's behavior. "We must be careful not to find ourselves in a situation that is even more difficult and dangerous than now," Stoltenberg said, noting the alliance had a range of options to respond to Russia, without getting into specifics.

For now, NATO still hopes Russia will return to complying with the INF treaty. The alliance has urged the country to engage in talks, for example in the NATO-Russia Council, before it's too late. But so far, NATO says, Russia has not taken up its offer.