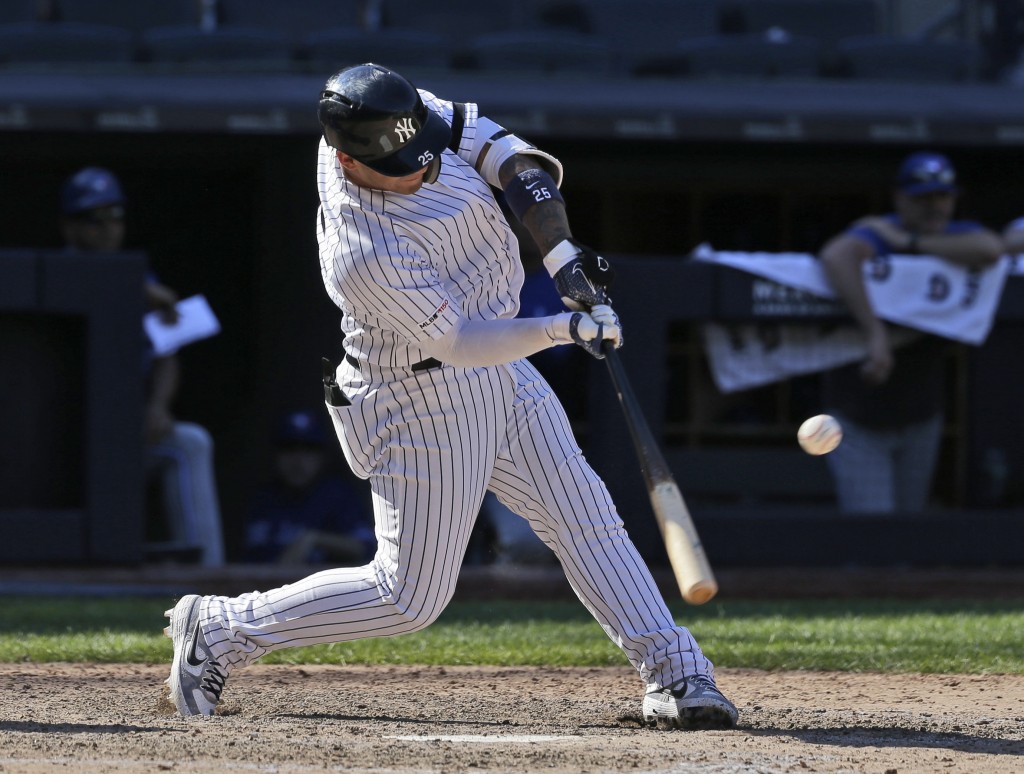 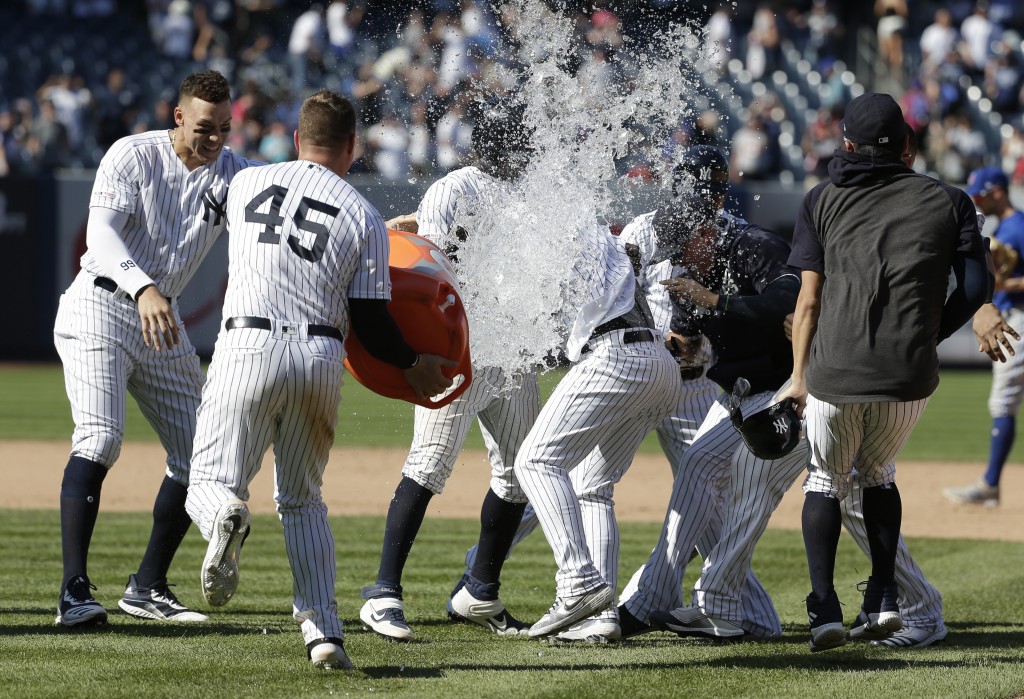 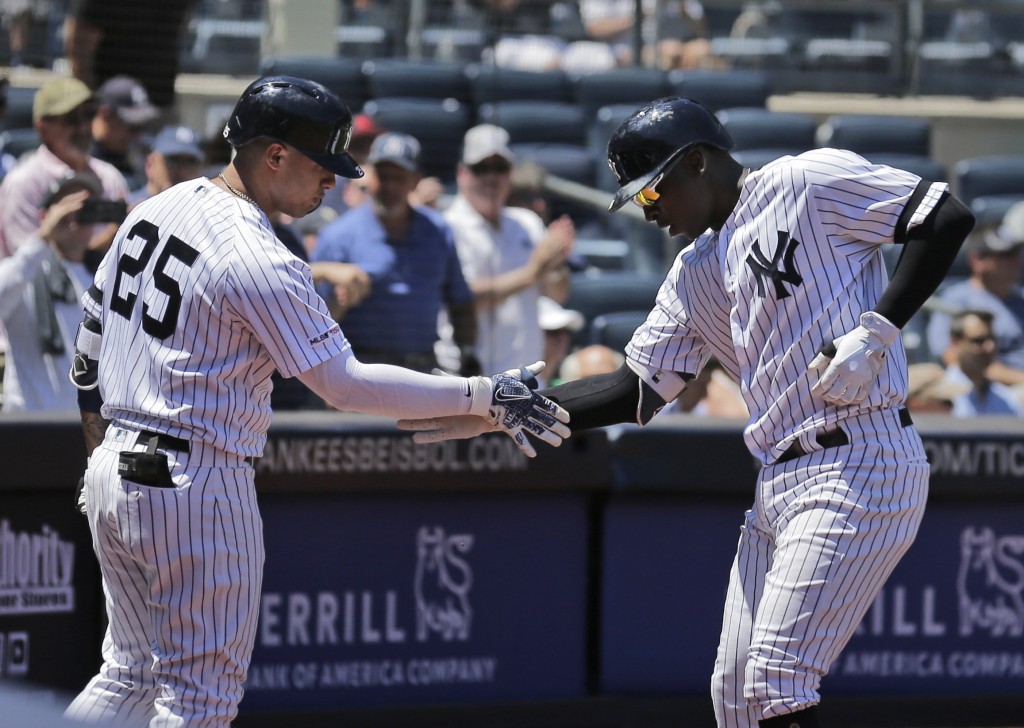 Didi Gregorius and DJ LeMahieu connected as the Yankees extended their major league record to 29 straight games with a home run. The AL East leaders overcame two homers and a double by Lourdes Gurriel Jr., plus an early 5-0 deficit, to finish a power-packed 9-1 homestand.

Now, they'll head straight from Yankee Stadium to England, where they'll enjoy two days off before playing the Boston Red Sox at London Stadium on Saturday and Sunday in the first major league games in Europe.

Zack Britton wasn't so great in giving up Cavan Biggio's RBI single in the ninth that made it 7-all. But Britton (3-1) wound up with the win to close out a three-game sweep.

Gregorius got an infield hit off Nick Kingham (3-2) with one out in the ninth, Aaron Hicks walked and Torres followed with his hit.

Bauer (6-6) had the 23rd double-figure strikeout game of his career and his fourth this season. The right-hander gave up one run and didn't allow a hit until rookie Humberto Arteaga singled with two outs in the fifth.

Bauer matched a career high by throwing 127 pitches and held the Royals to three hits.

Jake Bauers and Tyler Naquin homered off Jakob Junis in the fourth.

Lucas Duda homered in the ninth for Kansas City off Nick Wittgren.

BOSTON (AP) — José Abreu hit a two-run homer over the Green Monster and out of Fenway Park in the ninth inning as Chicago recovered after blowing the lead in the eighth.

Matt Barnes (3-3) gave up three straight hits in the top of the ninth — Leury García was caught stealing — including Abreu's 19th homer of the season.

Abreu had three hits and four RBIs, and García also had three hits for Chicago. James McCann had an RBI single and added a solo home run against Chris Sale as Chicago pounced on the Boston starter for five runs in the first three innings.

It marked the 10th time this season that Baltimore yielded at least five home runs. Bundy gave up two of them and now has allowed 19 homers in 16 starts.

Jonathan Villar and Pedro Severino homered for the Orioles, who have lost 13 of 14. Baltimore owns the worst record in the majors (22-58) and the worst at home (9-30).

SAN FRANCISCO (AP) — David Dahl hit a go-ahead grand slam in the third and drove in a career-high five runs to lead Colorado.

Dahl connected off Jeff Samardzija for his second career grand slam, with the other coming last Sept. 10 against Arizona. It marked the first grand slam ever hit by a Rockies player in San Francisco.

Dahl added an RBI single in the seventh. He had a two-run shot in the series opener.

The big swing in the series finale backed German Márquez (8-3), who immediately surrendered Pablo Sandoval's homer the next inning but won his second straight decision. Márquezallowed three runs and seven hits, struck out two and walked two over five innings. Wade Davis finished for his 11th save.

Samardzija (4-7) was tagged for five runs and three hits in five innings.

PHOENIX (AP) — Eduardo Escobar's three-run home gave Arizona a four-run lead before Los Angeles recorded an out, and the Diamondbacks cruised to the win.

The Dodgers, with the best record in the majors at 55-27, lost for just the second time — both to Arizona in the three-game series — in nine games, while Arizona finished a nine-game homestand 3-6.

Jarrod Dyson had three hits, an RBI and swiped two bases to raise his NL-leading total to 19. He also had a home run-stealing catch over the right-center field fence.

The Dodgers' Cody Bellinger hit his 26th home run of the season, tying him for for fourth-most before the All-Star break in franchise history.

The Diamondbacks roughed up Tony Gonsolin (0-1) right away in his major league debut.

Gonsolin got his first major league hit in his first career at-bat in the thirdn eight starts at Triple-A Reno.