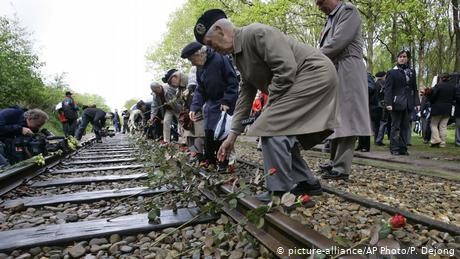 Roger van Boxtel, CEO of rail company Nederlandse Spoorwegen (NS), announced the decision to compensate Holocaust victims and their families at an event in the Utrecht Railway Museum on Wednesday.

Under the proposal, Holocaust survivors are to receive €15,000 ($17,080). They include about 500 Jews, Roma and Sinti survivors who were transported to the extermination camps but survived.

In a statement, NS said it had reserved "several tens of millions of euros" for the payments.

A former mayor of Amsterdam, Job Cohen, supervised a committee set up in January to work out how to formulate the payments. He said it had been a very difficult task: "An amount of money to compensate for suffering cannot be stated," he said.

Rather, the money was to acknowledge what had happened and the role NS had played, RTV Utrecht reported him as saying. Cohen had set up a contact and information service for people who were eligible for compensation.

NS had announced at the end of November it planned to make individual compensation payments to Holocaust survivors and relatives.

An estimated 100,000 Dutch Jews — or 70% of the total number of Jewish people living in the Netherlands before World War II — were deported on the trains to Westerbork, in the north of the country. From there the Nazis transported them east across the border into Germany and to the death camps.

With the payments scheme, NS follows similar measures taken in France which made payments in 2014 to Jewish victims of the Holocaust.

Germany's national rail company, Deutsche Bahn (DB), admitted in 2008 the central role the Reichsbahn had played during World War II and that its tracks and freight were integral to the Nazi extermination plan. "Without the Reichsbahn the industrial murder of millions of people would not have been possible," historian Susanne Kill said at the time.

A touring exhibition "Train of Memory" was organized in 2008, detailing the way adults and children had to pay their passage to the death camps, earning the rail company the equivalent of €445 million in today's values.

DB has resisted class and individual actions for compensation over the years. In 2012, it hired a New York law firm and public relations agency to monitor US legislative initiatives which had the potential to become the basis for lawsuits.

Van Boxtel had met and discussed the Dutch rail project with 83-year-old Salo Muller, whose parents had been deported on NS trains to Westerbork. They were then murdered at Auschwitz. At the time, the Dutch rail company officials had never blocked the transport and earned a reported 2.5 million Dutch guilder as a result.

According to the Algemeen Dagblad (AD) a Dutch daily newspaper based in Rotterdam, the Central Jewish Consultation group (CJO) welcomed the move as it represented a "confession of guilt, and that is good."

But the CJO also called for a gesture from NS for the 100,000 people who did not survive: "Perhaps something can happen for the Jewish community altogether," the CJO said, according to the AD.