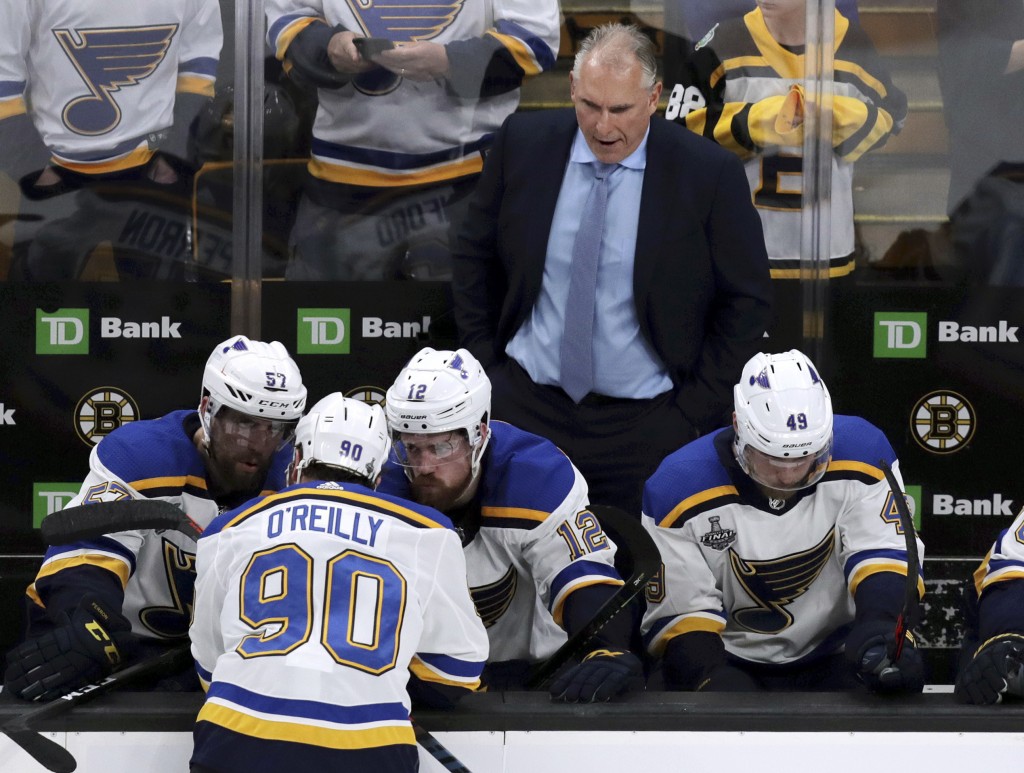 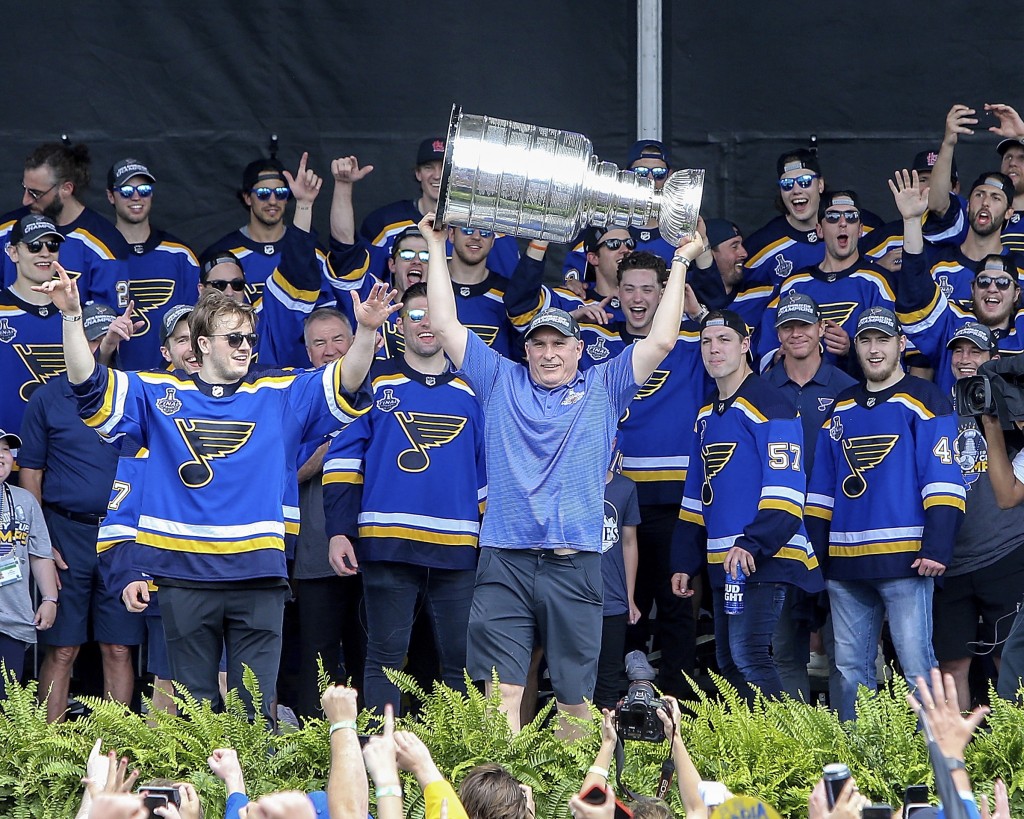 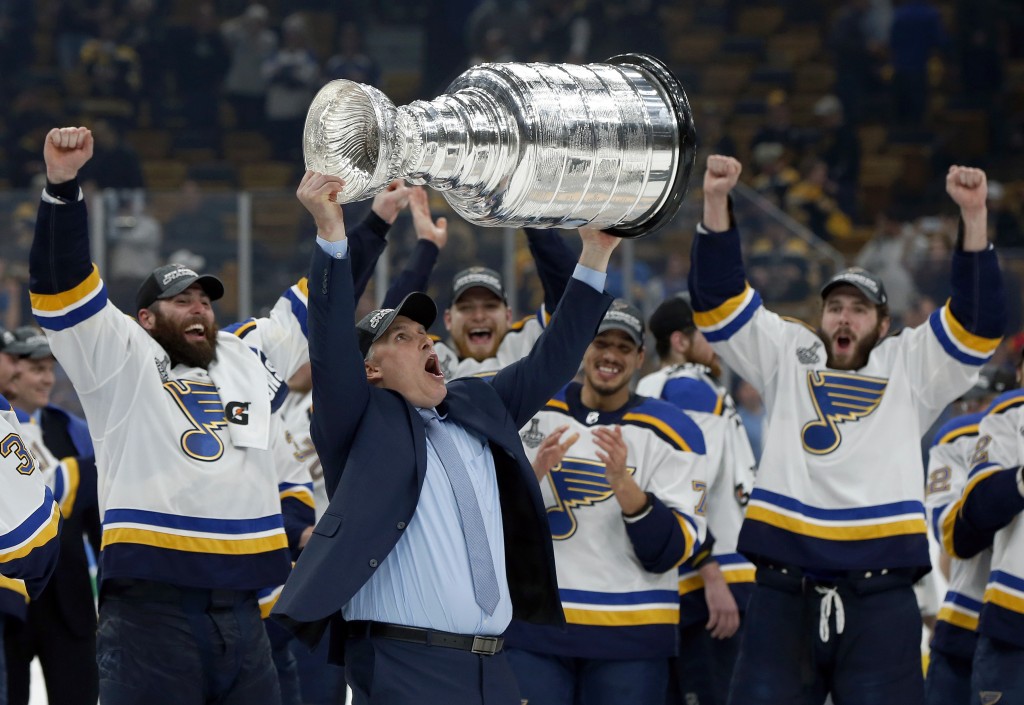 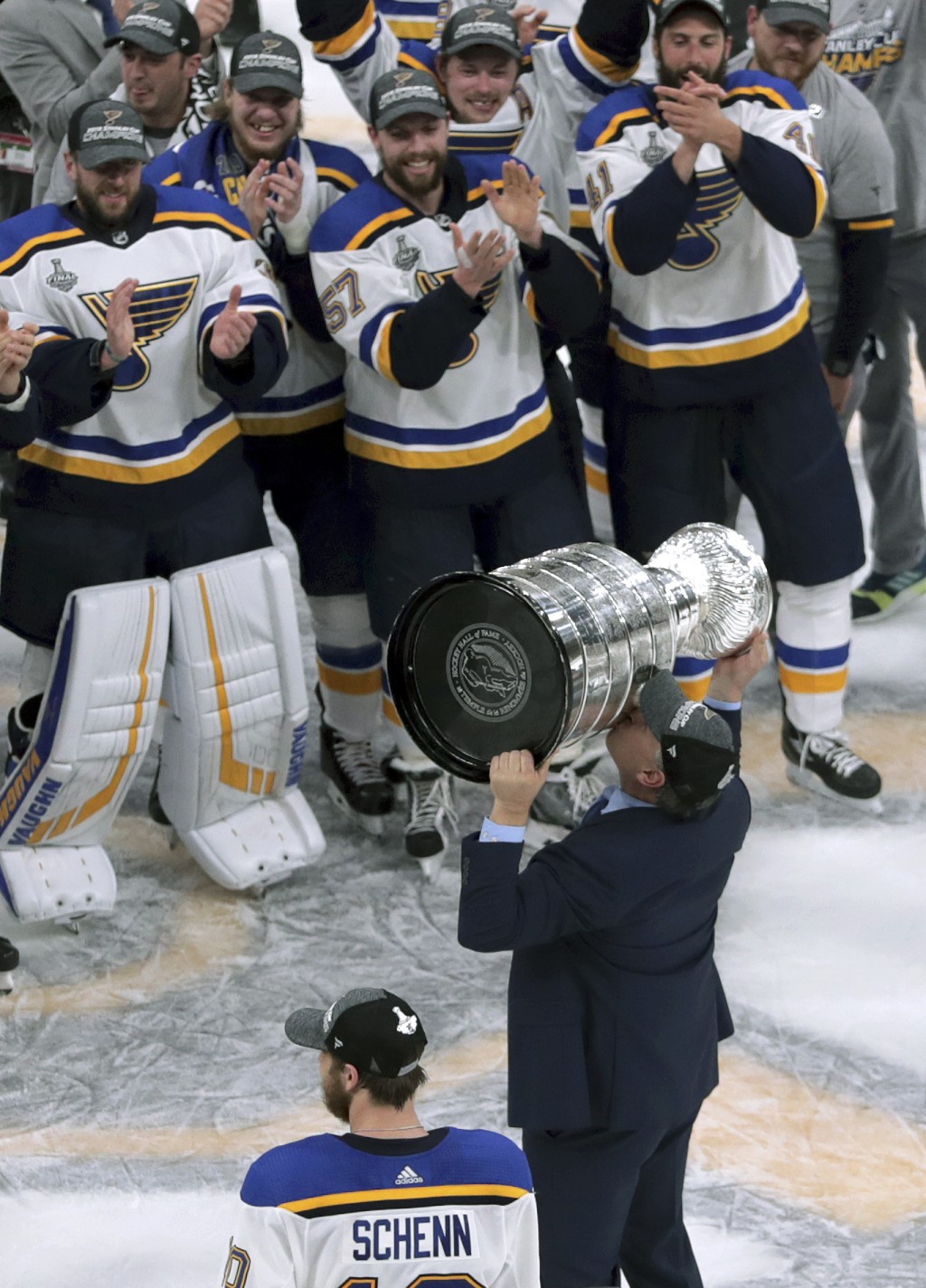 ST. LOUIS (AP) — Blues general manager Doug Armstrong had his staff produce a list of coaching candidates after firing Mike Yeo in November. He hasn't looked at it since January.

"He's going to stay as an interim for the next three years because we've had some success with that," Armstrong quipped.

Berube took over for Yeo in late November and led the Blues to one of the most dramatic turnarounds in NHL history, culminating with the first NHL championship in the franchise's 52-year history. The Blues went 38-19-6 during the regular season under Berube, climbing from dead last in the league standings in early January to third place in the Central Division. The Blues were one of only seven teams to make the postseason after being last in the league in points that late in the season — and they are the only team to win a playoff series after climbing out of that hole, let alone win it all.

The 53-year-old Berube, a former NHL enforcer from a tiny hamlet in Alberta, Canada, won over the team by holding everyone accountable, including himself.

"Whether it's through ice time, where you fit in in the lineup on a nightly basis," Berube said. "It's really conversations with the players more than anything. It's just putting the team-first mindset and drilling it into the team. That's really, basically it. It takes a lot of work, it's every day, but it's getting that team-first mindset. Once we started to get that and once I started to see guys fitting in certain areas, we were playing pretty good hockey, we just weren't getting the wins and that started to come."

Armstrong told Berube that he would be the head coach in the final week of the regular season, but both sides agreed to hold off on negotiations until after the final game. That turned out to be a Game 7 win in the final last week. Financial terms were not disclosed.

"In any negotiation you walk in hoping it's going to go quickly and this one did go relatively quickly, but you can get some bumps on the road, some differing opinions and I certainly didn't want that walking into game two, or three or four of a playoff series," Armstrong said. "We wanted his mind focused on the task."

Last fall, Berube immediately took down the standings in the locker room when he took over. It was one of the many moves that convinced Armstrong to ditch that list of coaching candidates.

"I think when you come in in October and you look at the standings, you're excited that you're at the top and then as you're going lower and lower and lower, it gets depressing coming in on a Tuesday morning and looking up at 28 teams ahead of you," Armstrong said. "I thought it was a great idea to take those down. And really what he stressed to everyone in our group is, 'Let's live in the moment. You're not going to change yesterday and tomorrow is going to come soon enough, let's work on today.'"

That mindset served the Blues well, especially in the postseason where nothing came easy.

After winning the first two games on the road in the opening round against Winnipeg, St. Louis dropped the next two at home. The Blues went just 6-7 on Enterprise Center ice in the postseason, including losing Game 6 with a chance to win the Cup against Boston.

St. Louis could have folded after Game 3 in the third round after losing to the San Jose Sharks in overtime on a goal scored directly off of an illegal hand pass that wasn't caught by the officials. Instead, taking their cue from Berube, the Blues won the next three games to close out the series.

"I thought Craig and his staff did a fabulous job of celebrating the victories through the end of that evening and then the next day coming back to work," Armstrong said. "We didn't get hung up on a bad loss or too high on a win. When you get into the playoffs, I thought that was a huge advantage for our team."

That mentality did not happen overnight.

"You've got to push it and prod and do all kinds of things to get everybody on the same page and to buy in, it takes a little time," Berube said. "They did a great job, our players. They wanted to be a good team and that obviously happened and they became a good team."