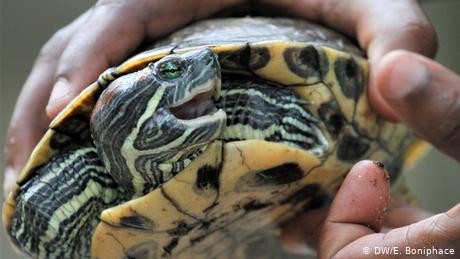 Officials said the men were travelling from China with red-eared terrapins packed in their luggage. They also seized drugs from the bags.

The terrapins were kept in plastic containers inside the suitcases of the two men, who flew in from Guangzhou, China on an AirAisa flight on June 20.

The terrapin trade is not illegal, but the men had no permits for the animals, Zulkurnain Mohamed Yusof said Wednesday. The tortoises, he added, would be handed over to the Wildlife and National Parks Department (Perhilitan).

Some animals died on the journey but most of them survived, he said.

"Our initial investigations found they (they) were brought in here for the purpose of being bought back to India," Yusof told reporters.

The red-eared slider (Trachemys scripta elegans), also known as the red-eared terrapin, is a semiaquatic turtle belonging to the family Emydidae. They are popular pets across the world.

While the small animals are not anendangered species, they are widely trafficked due to their high demand as pets.

As the suspects did not have proper documents for the turtles, they were detained by Malaysian police and could face up to five years in jail and a fine if convicted.

"What is clear is how crazy the pet trade has become," she said.

Customs officials have in the past seized animal parts at Kuala Lumpur's airport, but it is rare to find a huge stash of live animals in luggage.