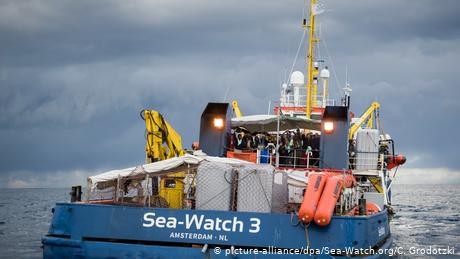 Sea-Watch 3 Captain Carola Rackete said Wednesday that the rescue ship would head to Lampedusa with its rescued passengers.

"I've decided to enter the port of Lampedusa," Sea Watch tweeted the ship's German captain as saying. "I know this is risky, but the 42 shipwrecked on board are exhausted. I will bring them to safety."

The ship was reported to have entered Italian territorial waters at 2 p.m. local time (1200 UTC) on Wednesday.

The passengers have been on the ship for two weeks, after being picked up earlier this month off the coast of Libya. The ship spent the time circling outside Italian waters off the Lampedusa coast.

While Italy has agreed to take in 11 of the rescued migrants on medical or humanitarian grounds, it has refused to take in the others, saying they should be taken either to Germany or to the Netherlands, where the Sea-Watch is registered.

'Europe has abandoned us'

Sea-Watch Captain Carola Rakete said that after 14 days "no political and judicial solution was found." The German navigator said, "Europe has abandoned us." Rakete had refused to take the rescued people back to Libya, which the UN regards as safe.

Italian Interior Minister Matteo Salvini successfully proposed a decree to fine charity ships which flout orders to keep out of Italian waters. The range of the fines is from €10,000 to €50,000 ($11,360 to $56,800). There is also the possibility of criminal action against the crew, and the confiscation of the vessel.

The European Court of Human Rights on Tuesday rejected a petition from Sea-Watch to order Italy to take in its boat.