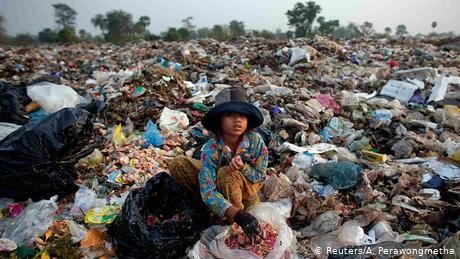 Cambodia jailed translator and fixer Rath Rott Mony for two years on Wednesday for his brief translation stint on a documentary that the government considers defamatory for Cambodia.

Read more: Can Cambodia put an end to human trafficking?

Russian news outlet RT created the 27-minute documentary "My Mother Sold Me: Cambodia, where virginity is a commodity," which accounts the lives of several impoverished Cambodian girls sold into sex work.

Cambodia's court also ordered Mony to pay 70 million riel ($17,200, €15,100) in compensation to two of the mothers who appeared in the film, Trep Sreylin and Keo Malai.

In the film, both mothers say they sold their daughters' virginity in the trafficking trade. Later however, they informed authorities that they were told to lie in the film to receive more funding.

"I didn't sell my daughter and Mony told me to say negative things so that there would be more funding," Malai told Reuters after the verdict.

Sreylin and Malai also said that Mony had promised to assist in solving a land dispute and open a shop for them if they lied about their stories.

Mony, who was arrested in Thailand on his way to the Netherlands in December, has denied the accusation.

Phil Robertson of Human Rights Watch released a statement saying that Cambodia is trying to conceal existing poverty in the country that pushes families to sell their daughters into sex work.

"The push to imprison Mony is an example of Cambodia playing 'shoot the messenger' of a person who told the international community about an inconvenient reality the government wants to hide," Robertson said in the statement.

Prime Minister Hun Sen has cracked down on human rights advocates and has been criticized by the humanitarian community for using the term 'fake news' to take down any opposition or government critics.

Mony's wife, Long Kimheang, calls the prison sentence unfair as her husband had only worked as the translator.

"The court's decision to put my husband in prison for two years is not justice," Kimheang told Reuters.

RT said that it had "no reason to doubt the integrity" of the subjects' original stories.