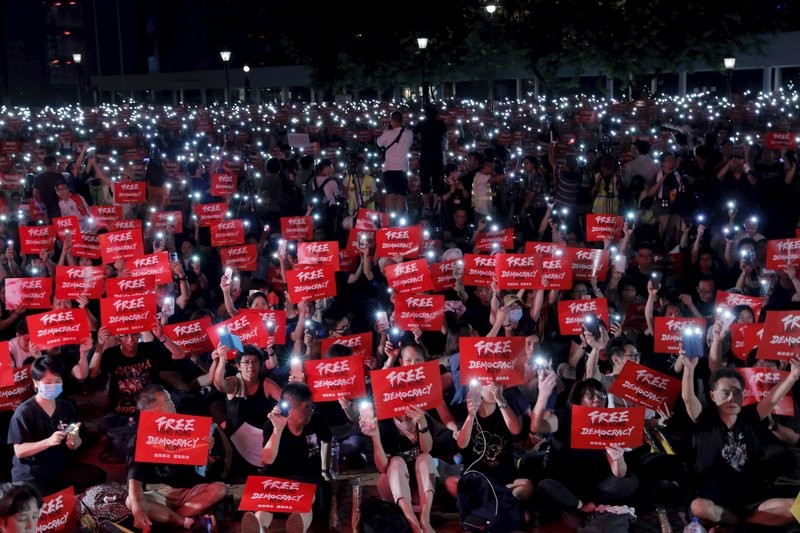 HONG KONG (AP) — Thousands of people joined Hong Kong’s latest rally Wednesday night against legislation they fear would erode the city’s freedoms, capping a daylong appeal to world leaders ahead of a G-20 summit that brings together the heads of China, the United States and other major nations later this week.

Below neon-lit skyscrapers, the peaceful crowd of all ages listened to speeches in a public square and then in unison held up their smartphones with their lights on. A big sign read “Free Hong Kong Democracy Now.” The police presence was light, a few officers watching from a distance.

After the rally’s end, younger protesters, some of whom have been more militant, headed to the nearby police headquarters, where they stood outside shouting demands for an independent inquiry into a heavy-handed police crackdown at a protest earlier this month.

The protests were sparked by proposed legislative changes that would allow suspects to be extradited from Hong Kong to mainland China for trial. Many fear the proposals would erode Hong Kong’s judicial independence and the civil liberties the semi-autonomous city was guaranteed after its handover from British rule in 1997.

The government suspended debate on the legislation indefinitely after earlier protests, but activists are demanding that it be withdrawn completely.

Earlier Wednesday, several hundred delivered petitions to the consulates of several G-20 countries. A sign addressed to French President Emmanuel Macron asked him to back up Hong Kong at the two-day meeting, which opens Friday in Osaka, Japan.

Outside the U.S. Consulate, some protesters held up signs reading “President Trump — Please Liberate Hong Kong.” The U.S. president is due to meet with Chinese President Xi Jinping during the summit. Beijing has strongly opposed any discussion of the issue at the G-20 summit, saying Hong Kong matters are an internal Chinese affair. The city of 7.4 million people is a territory of China.

Protester Mandy Wong described Hong Kong as an international city whose residents will all be affected by the legislation, regardless of their country of origin.

“That’s why it is necessary for other countries or overseas people to pay attention to this extradition bill,” the 25-year-old student said.

The protesters aimed to present petitions at 19 consulates before the nighttime rally at Edinburgh Place, a public square near the waterfront in central Hong Kong.

Some lawmakers were planning a no-confidence vote against the territory’s leader, Chief Executive Carrie Lam, but it didn’t happen Wednesday. Pro-government supporters have a solid majority in the Legislative Assembly and the measure is not expected to pass.

Smaller groups have surrounded government offices, the legislature and police headquarters. Besides withdrawal of the legislation, they are demanding accountability for the crackdown on a June 12 protest during which tear gas and rubber bullets were fired.

Lam has apologized for her handling of the matter, but has declined to respond to other demands.

Several foreign governments, along with legal, business, human rights and media groups in Hong Kong, have expressed concern about both the legislation and the government’s handling of the protests.

In a statement Tuesday in the House of Commons, British Foreign Secretary Jeremy Hunt said he raised the issue with Lam on June 12.

Britain urges Hong Kong to establish a “robust, independent investigation” into the violence against protesters, and will not issue further export licenses for crowd control equipment to Hong Kong “unless we are satisfied that concerns raised on human rights and fundamental freedoms have been thoroughly addressed,” he said.

China has said it fully backs Lam’s administration and rejected foreign criticism as interference in its internal affairs.

“China has expressed strong dissatisfaction and resolute opposition to that,” he said. “We urge the British side to immediately stop interfering in Hong Kong affairs and China’s internal affairs in any way.”