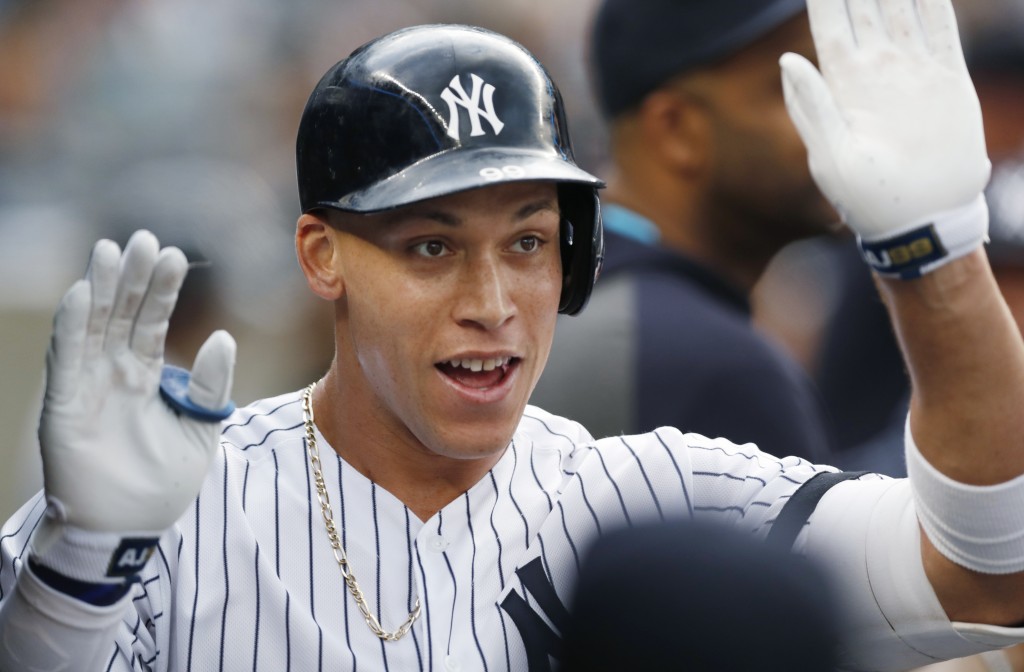 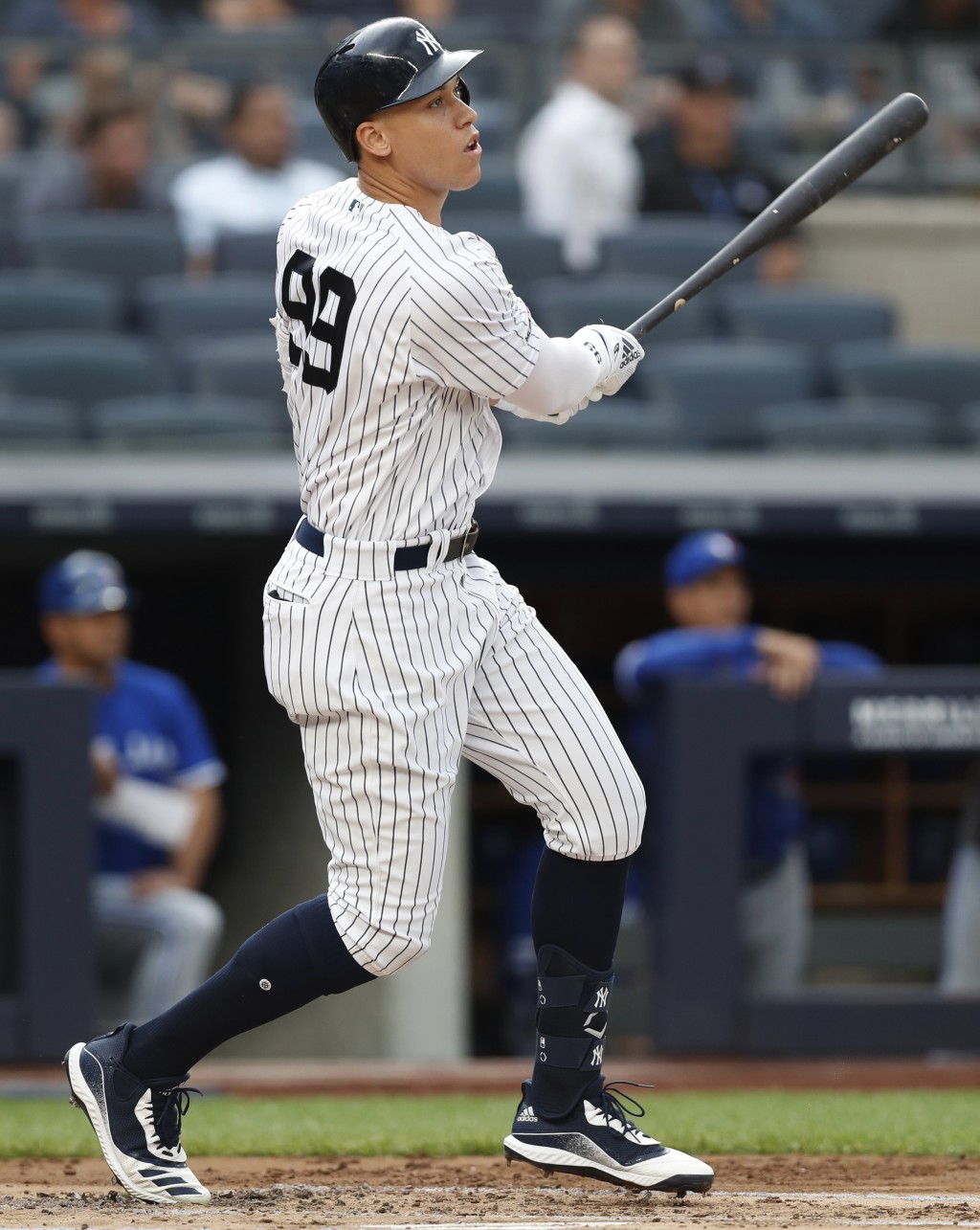 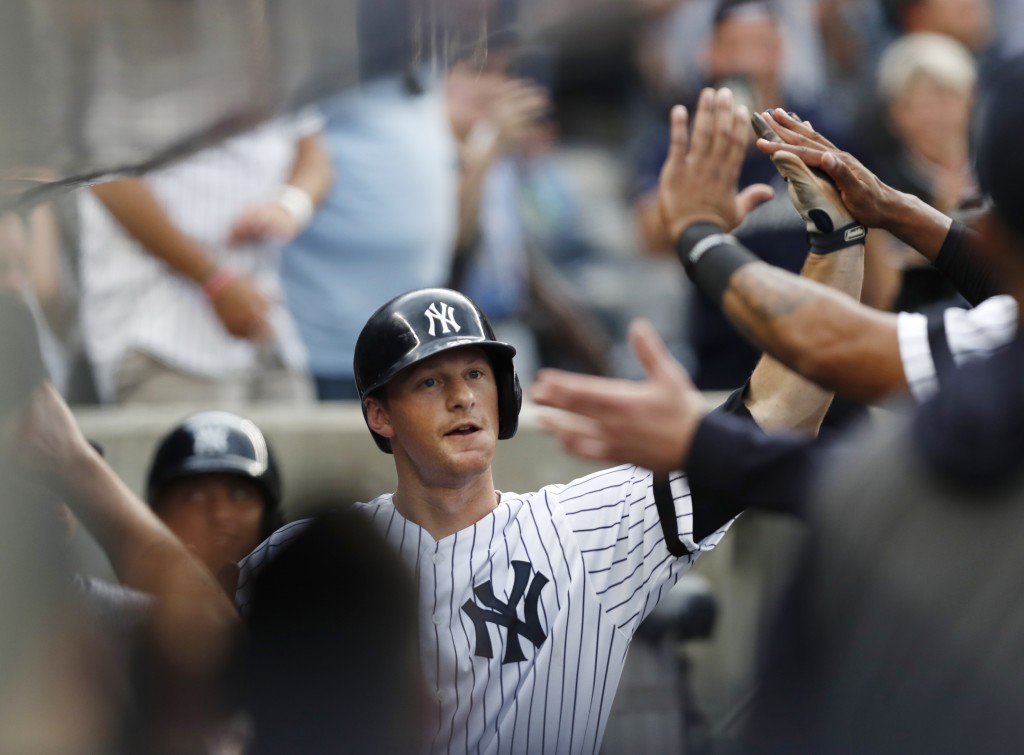 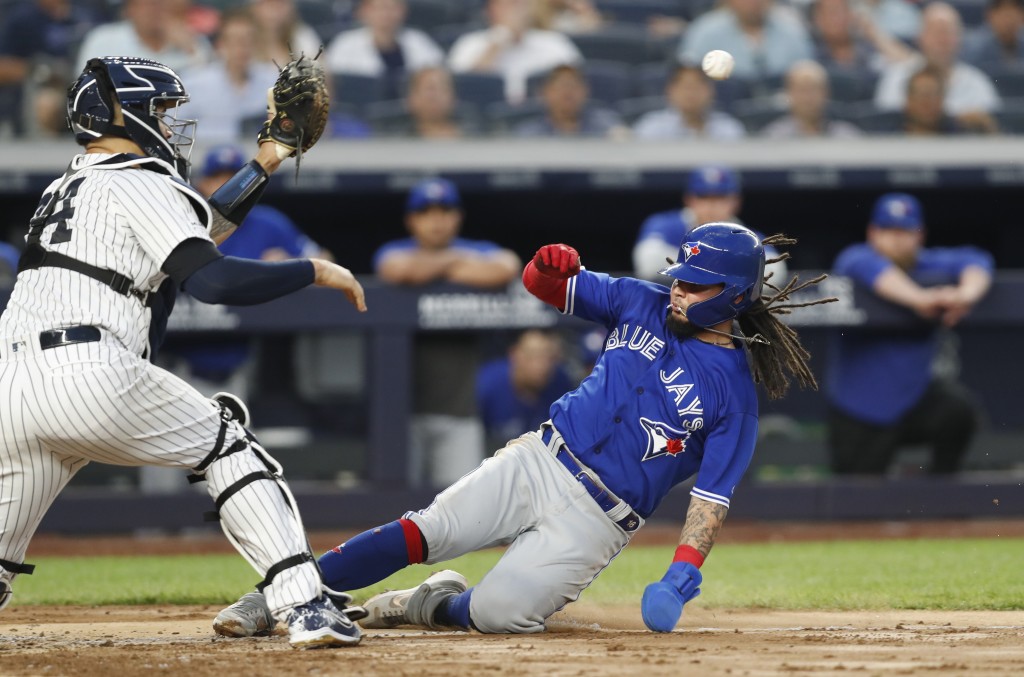 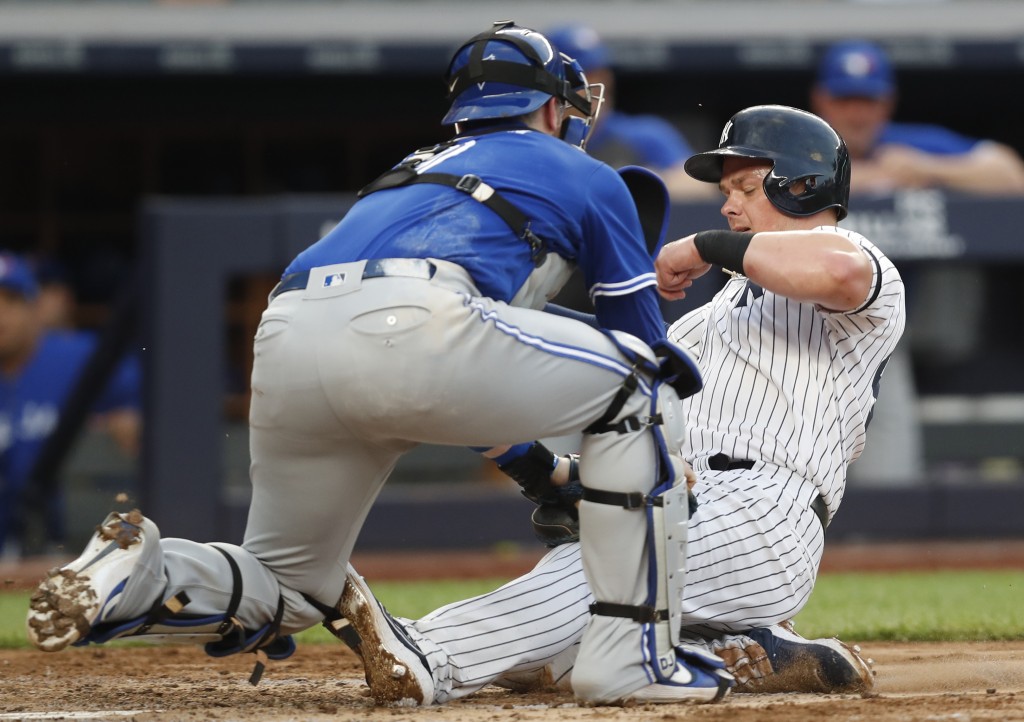 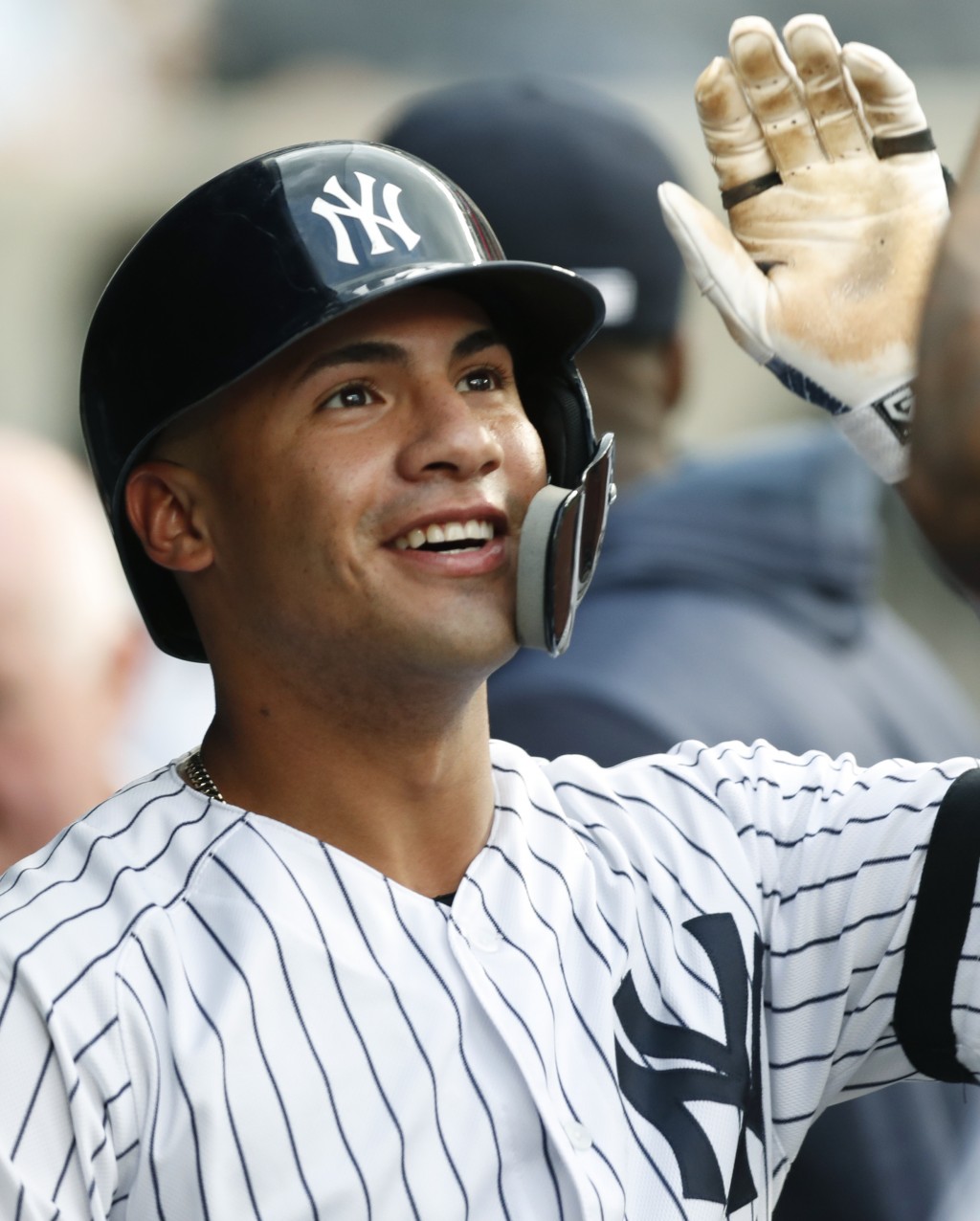 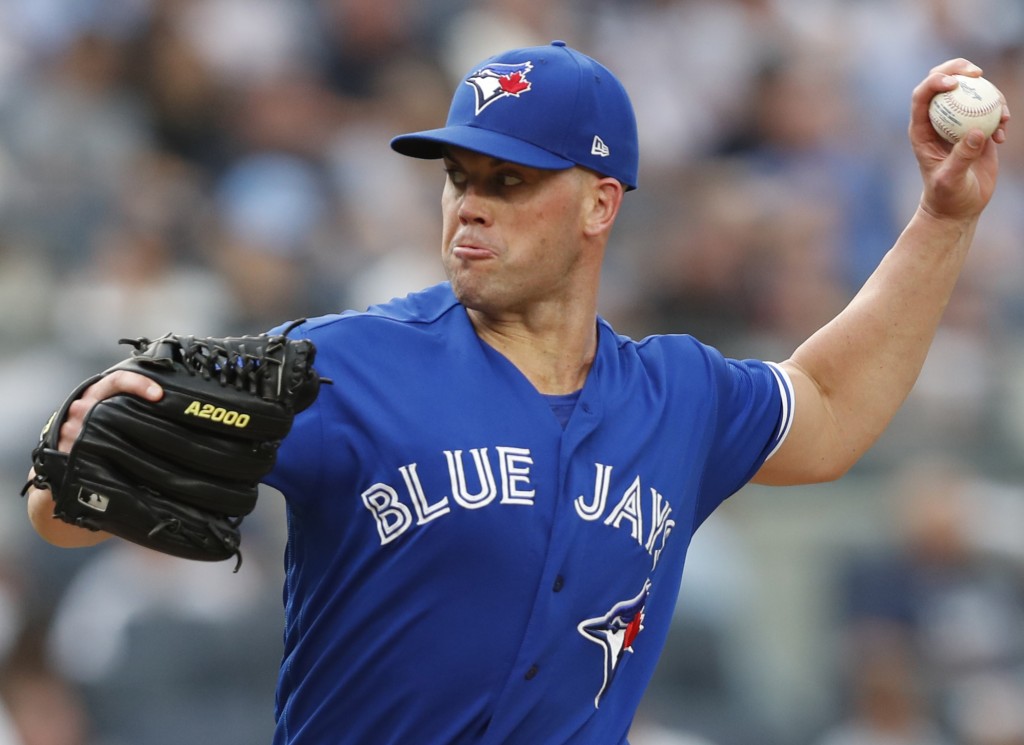 Gleyber Torres and Edwin Encarnación each poked a solo shot over the short right field porch for the Yankees, who shook off another injury to Giancarlo Stanton and won for the 10th time in 11 games. The AL East leaders are 8-1 on a 10-game homestand that wraps up Wednesday.

Aroldis Chapman allowed a run in the ninth before retiring Freddy Galvis on an easy grounder with two aboard for his 23rd save in 25 tries.

Stanton exited in the fourth with a bruised right knee and was scheduled for an MRI. He got tangled up with Toronto pitcher Clayton Richard (0-4) in the first while getting thrown out on a headfirst slide into third base.

The slugger just returned last Tuesday from a string of injuries to his biceps, shoulder and calf.

Nonetheless, the Yankees wasted no time rewriting the record book on this night.

LeMahieu hit his fourth career leadoff shot into the second deck down the left field line, breaking a mark New York shared for one day with the 2002 Texas Rangers, who also homered in 27 consecutive games.

The Yankees quickly added another one, too. Judge followed LeMahieu with an opposite-field drive into the right field stands. It was the first home run since April 20 for Judge, who returned Friday from an oblique injury that sidelined him for two months.

It was the second time this season and 11th in franchise history the Yankees started a game with consecutive home runs.

Danny Jansen's double in the sixth set up Eric Sogard's sacrifice fly and an RBI single by Vladimir Guerrero Jr. that chased Cortes and cut it to 3-2. Tommy Kahnle escaped trouble with two strikeouts and Stephen Tarpley, recalled from Triple-A earlier in the day, tossed a perfect seventh.

Zack Britton worked a 1-2-3 eighth and Chapman got three outs. Randal Grichuk's run-scoring single with two outs trimmed it to 4-3.

New York improved to 7-0 when starting an opener.

Torres went deep in the second and Encarnación hit his AL-high 24th homer — third with the Yankees — off reliever Tim Mayza in the eighth.

Tagged right off the bat, Richard settled down and lasted six innings. The former backup quarterback at Michigan, pitching on a night when his alma mater was playing for the NCAA baseball championship in the College World Series, allowed three runs and eight hits.

When the Yankees play the rival Red Sox in London this weekend, fans on the other side of the pond will get a firsthand look at new-age baseball: New York plans to start an opener again in the series finale Sunday.

Yankees: SS Didi Gregorius was rested against the lefty. ... DH-1B Kendrys Morales was reinstated from the 10-day injured list and designated for assignment.