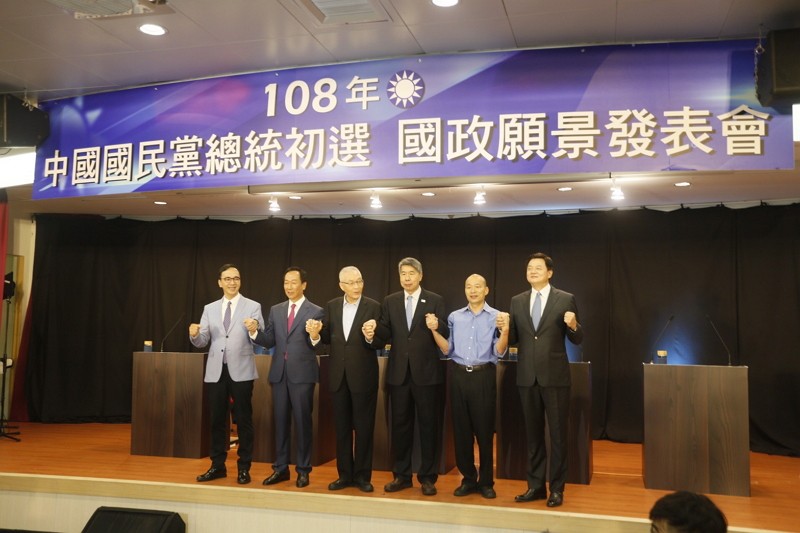 The top two contenders of the opposition Kuomintang's (KMT's) presidential primary both pledged Tuesday to focus on improving the strained cross-Taiwan Strait relations and to boost the economy if elected.

A majority of Taiwanese people support maintaining the status quo rather than announcing independence or unification with China, according to Han.

If elected president, Han said, he will promote cross-strait peace and push for the two sides to sign a cross-strait trade-in-goods agreement to boost Taiwan's economy, which he said has been sluggish under the current Democratic Progressive Party (DPP) government.

For his part, Hon Hai Precision Industry Co. Chairman Terry Gou (郭台銘) said he is known for his success in business management and his ability as an executive.

Accusing the DPP administration under President Tsai Ing-wen (蔡英文) of doing little to boost Taiwan's economy, Gou said he is confident he can revive the economy with his 40 years of experience in international trade and business management.

In order to achieve that goal, Gou, one of the richest men in Taiwan, said that maintaining cross-strait peace is the foundation for promoting stability and prosperity between Taiwan and China, and that he will uphold the "1992 consensus" to reduce cross-strait tension.

The "1992 consensus" is a tacit agreement between the Taiwanese and Chinese governments in 1992 that the two sides are part of one China, with each side free to define what that means.

Beijing has been taking a hardline stance on cross-strait relations since Tsai took office in May 2016.

Tsai has refused to accept China's condition for continuing good relations -- acknowledging the "1992 consensus," insisting that the agreement only means what Beijing wants it to mean -- that China is the People's Republic of China, with Taiwan as a part of it.

Chu emphasized the importance of upholding democracy and said Taiwan should voice support for the people in Hong Kong who rose up against an extradition law that would allow the Hong Kong authorities to extradite crime suspects to China.

Regarding national defense, Chu said Taiwan cannot safeguard its security by merely purchasing weapons. The morale of the military, and balanced cross-strait and U.S.-Taiwan relations are also important, he said.

To return to power in 2020, Chu said, what mattes most is unity within the party.

Chang, meanwhile, said that signing a cross-strait peace treaty would ensure peace between China and Taiwan.

The treaty, he said, should include clauses that Taiwan and China will never use force to threaten each other, and should discuss ways for both sides to participate in international organizations.

Chou said the first thing he would do as president is to reverse "anti-constitutional laws" passed by DPP lawmakers, such as pension reform bills and amendments to the National Security Act.

The second thing he would do is negotiate with China, the United States and Japan. He said he would urge the U.S. not to intervene in Taiwan's national affairs, and not to sell "useless F-16 fighter jets" to Taiwan.

The presentation was the first of a total of three televised forums organized by the KMT. Held in Kaohsiung, the candidates detailed their plans for the country in the areas of constitutional politics, diplomacy, cross-Taiwan Strait affairs and national security.

In the second televised forum scheduled for June 29 in Taichung, the contenders will speak about youth, society, culture and education.

The final presentation will be held July 3 in Taipei, with the focus on economic affairs, finance, the environment and energy.

Public opinion polls, meanwhile, will be conducted nationwide July 8-14, with the results to be released July 15. The KMT's Central Standing Committee will announce the party's candidate July 17.