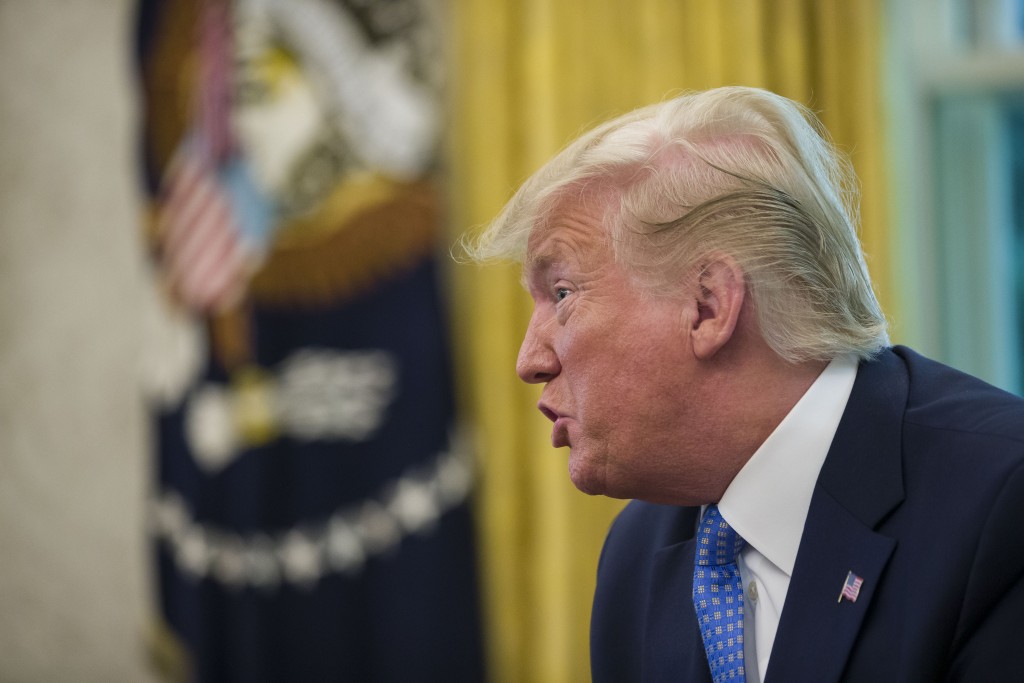 WASHINGTON (AP) — A federal judge ruled Tuesday that a lawsuit that accuses President Trump of profiting off the presidency in violation of the Constitution's emoluments clause can move forward.

U.S. District Judge Emmett G. Sullivan of the District of Columbia ruled against Justice Department lawyers who sought a mid-case appeal to a higher court and a stay on proceedings.

The case brought by nearly 200 congressional Democrats argues that Trump has been accepting gifts from foreign governments without congressional approval. Trump, unlike modern presidents before him, has declined to fully divest from his businesses.

The lawmakers say Trump's unwillingness to ask permission is akin to denying lawmakers the right to do their jobs.

The judge's decision clears the way for the lawmakers to begin subpoenas for information.

Tuesday's ruling came as Trump was heading to a roundtable event and fundraiser with supporters at his namesake hotel in Washington.

House Speaker Nancy Pelosi welcomed the ruling. As the Trump administration largely stonewalls congressional investigations, House Democrats have increasingly turned to the courts for relief. It's the latest of several recent court rulings in their favor.

"No one is above the law - not even the president," Pelosi said in a statement. "Once again, the courts have resoundingly reaffirmed our efforts to hold the President accountable for corruption, and ensure that the President acts in the public interest, not his own interest."

One of the lead lawmakers in the suit, Sen. Richard Blumenthal, D-Conn., tweeted, "This tremendous victory assures that President Trump will be held accountable to the Constitution & the American people — a historic triumph for legally mandated transparency."

The case argues that the president has received foreign government favors, such as Chinese government trademarks for his companies, payments for hotel room stays and event-space rentals by representatives of Saudi Arabia and Kuwait, and proceeds from Chinese or Emirati-linked government purchases of office space in Trump Tower.

Ethics experts say the constitutional emoluments clause was created by the Founding Fathers to ensure that government officials act with the interests of the American public in mind instead of their own pocketbooks.

Unlike prior presidents, Trump chose not to divest from his assets and he remains the owner of the Trump Organization, a sprawling business empire with 550 entities in more than 20 countries that include branded hotels, golf courses, licensing deals and other interests. His Washington, D.C., hotel is near the White House and has become a magnet for foreign governments, previously hosting groups tied to Kuwait, Bahrain, Turkey, Malaysia and Saudi Arabia.