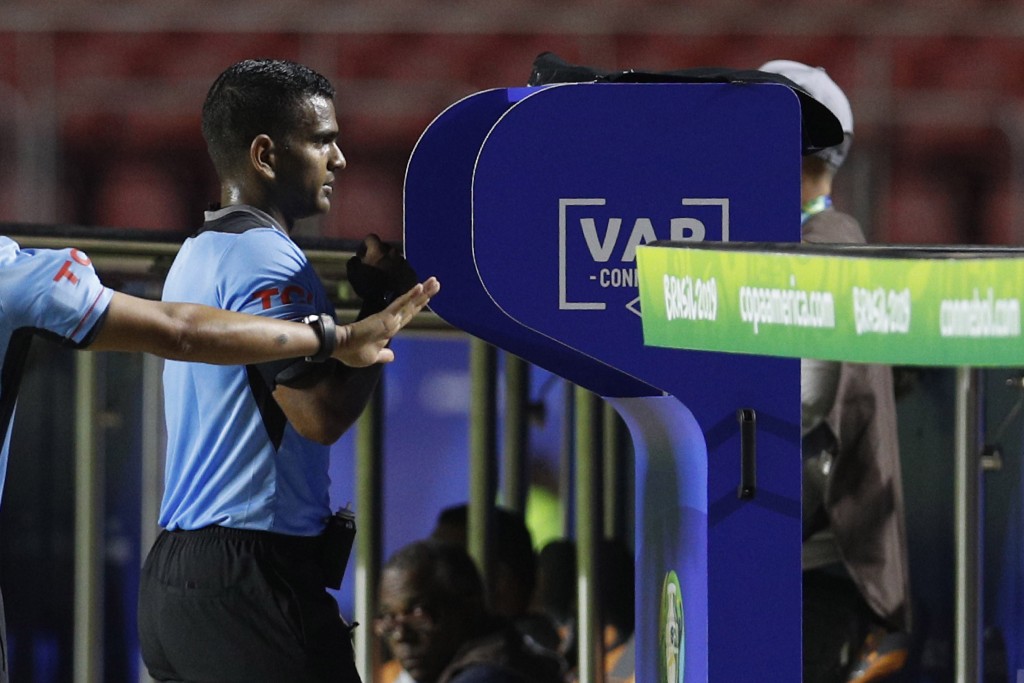 RIO DE JANEIRO (AP) — The head of refereeing at South America's soccer body Conmebol says he's pleased about the lack of major disputes at the Copa America involving video assisted reviews, despite some controversial decisions during the group stage.

Wilson Seneme said Tuesday that Copa America had "no scandals" in the 17 VAR interventions made in the first 18 matches of the tournament. It is the first time Copa America uses the technology, which is present from the opening game to the July 7 final at the Maracana Stadium, although it did not operate at all venues.

"We are very pleased with the result. In Brazil we have been working on it since 2017, which gave us many positive and negative experiences so we could arrive this well in 2019," Seneme said. "But the referee is the one who decides. VAR only helps in the decisions."

Organizers said the reasons for VAR use in Copa America's group stage were red cards (3), penalty kicks (7) and goal situations (7).

Five matches had two VAR reviews and seven had one.

The Conmebol executive said 15 decisions were reversed after those 17 VAR interventions, and two stood as initially decided.

The average time that VAR has stopped Copa America matches so far in the tournament is 2 minutes, 26 seconds. Seneme said some pauses were longer because they included a penalty kick to be taken or doctors coming onto the pitch for assistance.

Seneme said all calls were fair, but conceded that Japan deserved an intervention that could have resulted in a penalty in a 2-2 draw with Uruguay in Group C.

"But that is my personal opinion," he added about the apparent foul on Japan's Shoya Nakajima inside Uruguay's penalty box.

Uruguay advanced top of the group. Guest team Japan, which used younger players to prepare for the Tokyo Olympics next year, which features players mostly under 23 years old, was eliminated.

Conmebol said players fouled their adversaries in this group edition almost as much as in the 2015 Copa America; there were 578 fouls in Chile against 539 in Brazil. Almost as many yellow cards were shown, with 86 four years ago against 74 this year.

"That is evidence that technology did not interfere in the natural play of the matches," Seneme said. "Our objective is not to stop the match so much because of VAR."

Seneme also said that goalkeepers will not be shown yellow cards for stepping off the goal-line during penalty shootouts. The same decision was recently announced at the Women's World Cup in France.