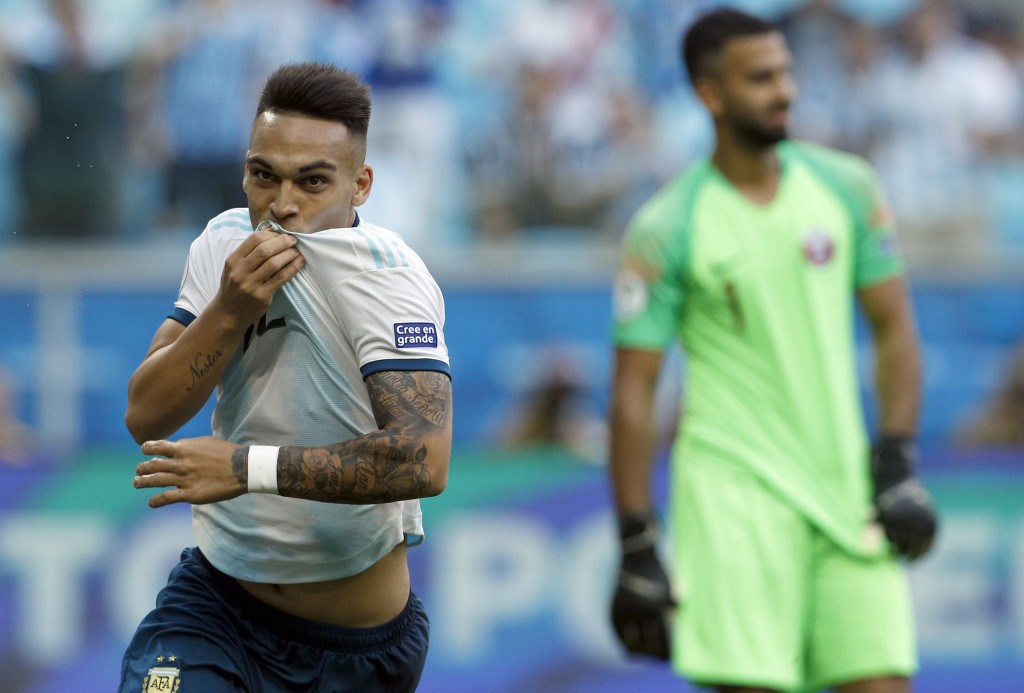 PORTO ALEGRE, Brazil (AP) — Argentina has experienced a troubled Copa America campaign so far but it might have found at least one stable solution for its ever-changing team.

Striker Lautaro Martinez scored the opening goal that led Argentina to a 2-0 victory against Qatar on Sunday and secured the team's place in the quarterfinals. He is likely to start against Venezuela on Friday at the Maracana Stadium since Argentina coach Lionel Scaloni said he will leave his offensive line intact.

The new formula is a double No. 9, performed by Sergio Aguero and Lautaro, in which soccer great Lionel Messi plays as a distributor and is free to move anywhere he likes.

"For some moments we played well, created opportunities and we didn't suffer," said Messi about his teammates up front.

Aguero said he and Lautaro "went very well for a few moments" in the match against Qatar.

Facing criticism for his constant changes, Scaloni was happy about his attacking three.

"Any team in the world will feel something when they see Messi-Aguero-Lautaro Martinez. Starting from them we have to set our balance," he said.

The 21-year-old Lautaro has scored five goals in nine matches for Argentina since the World Cup in Russia. He has nine goals in 35 games for Inter Milan in his first season.

His teammate Mauro Icardi, an icon for the Italian club, is not in Argentina's national team. Juventus' Paulo Dybala has barely had any chances in Copa America.

"Strikers live out of goals," Lautaro said after scoring against Qatar.

Argentina still has other grievances to address, such as the absence of a midfielder that disarms the opposition, and right and left-backs that do not leave their central defenders vulnerable.

But up front the team looks set.