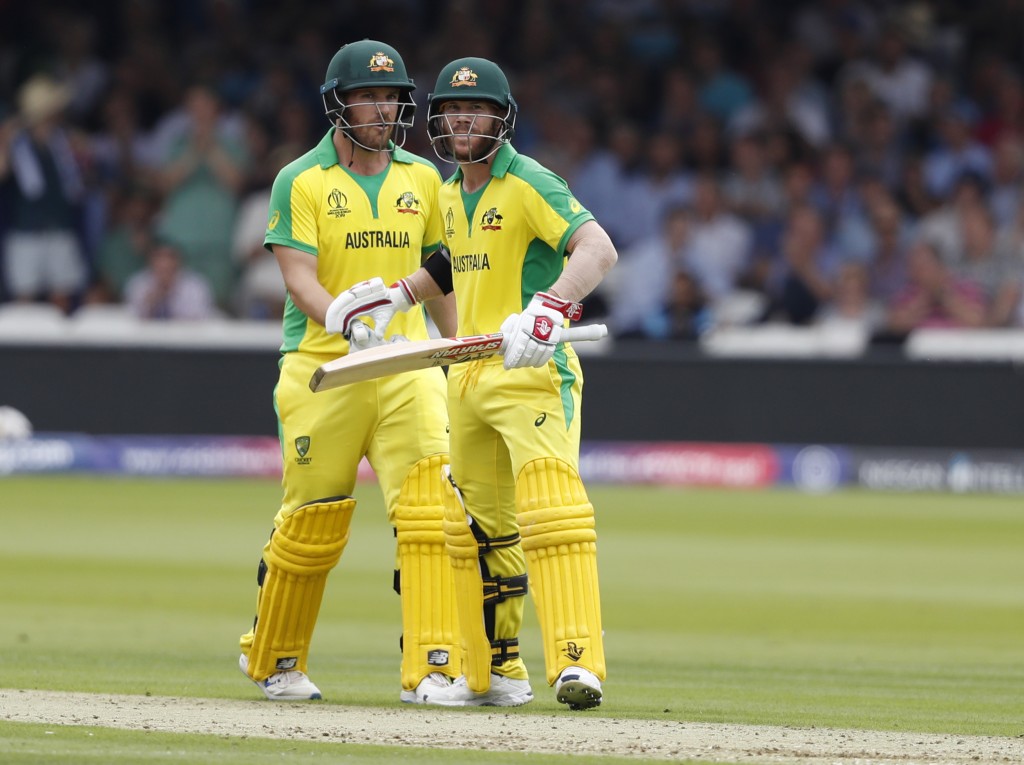 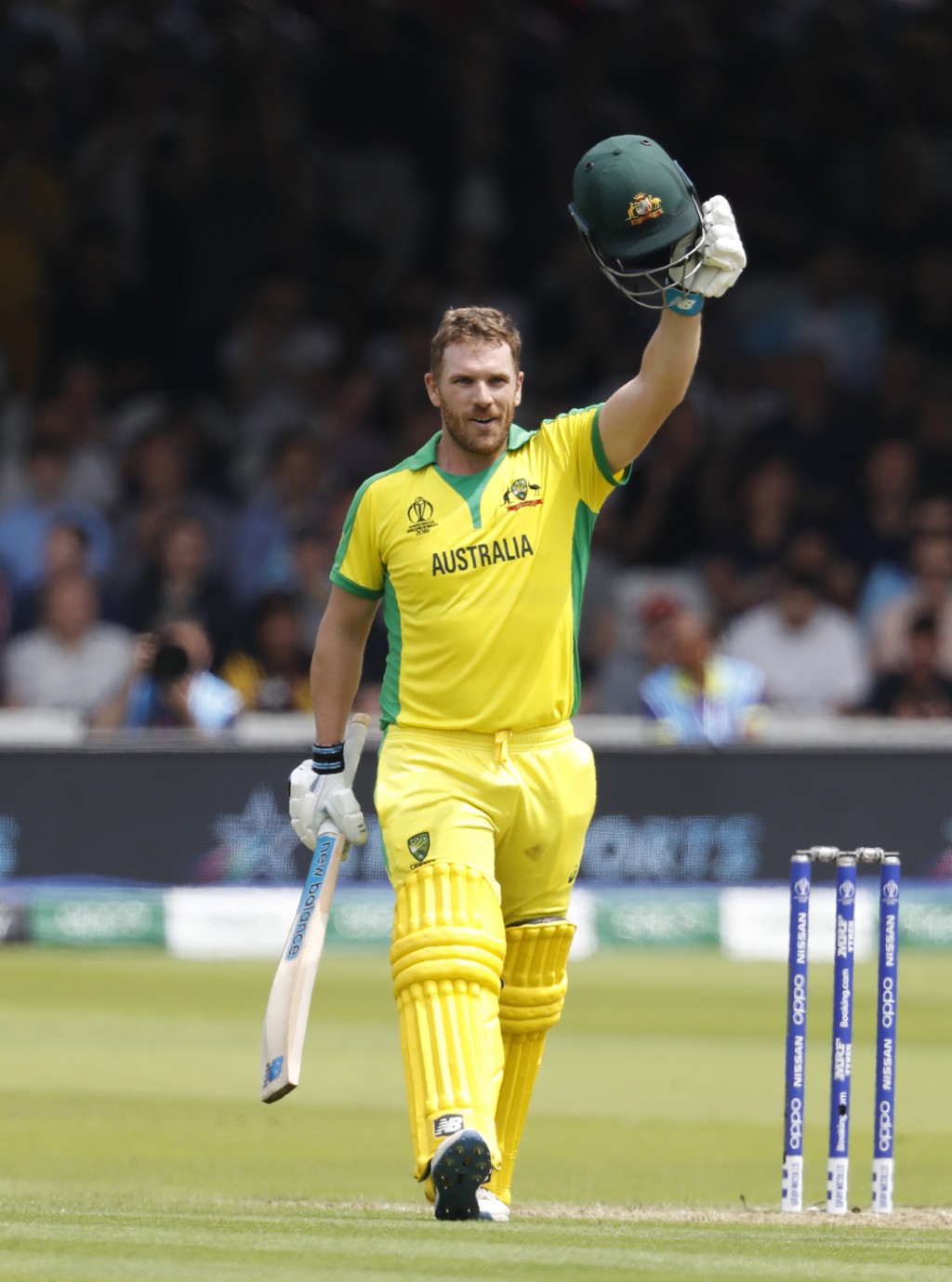 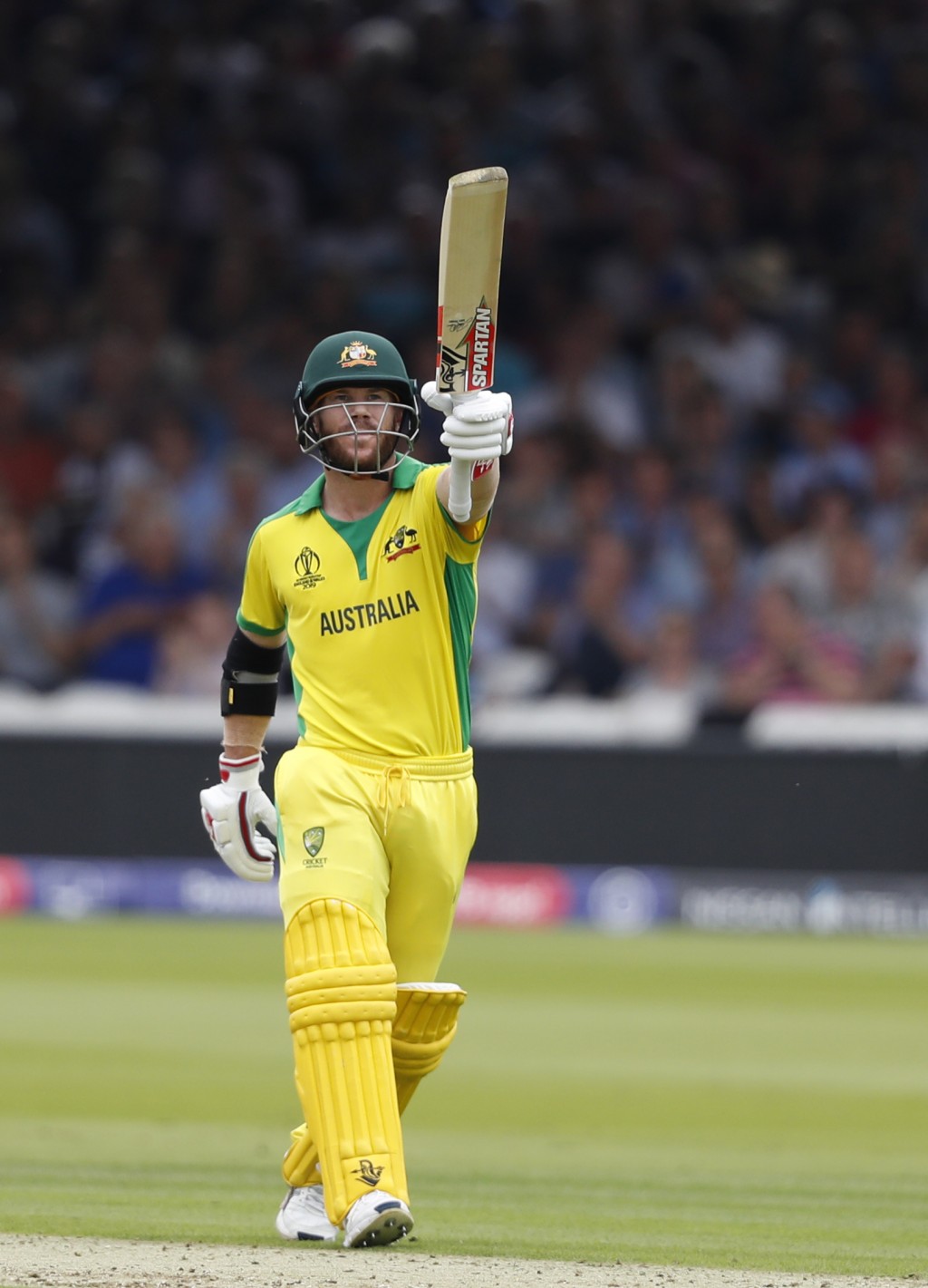 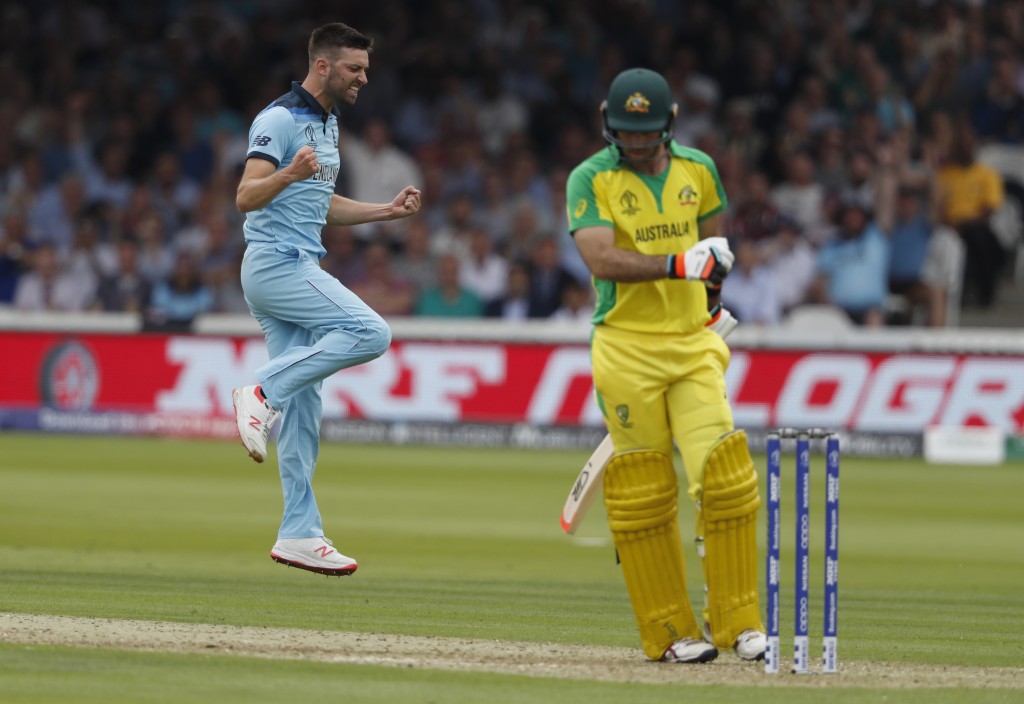 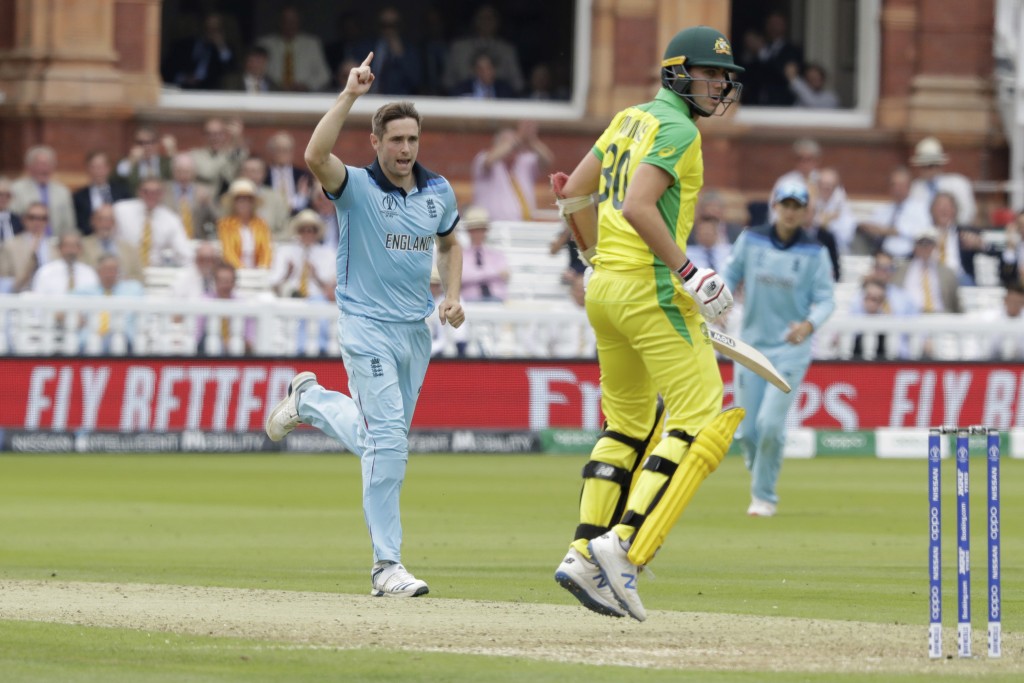 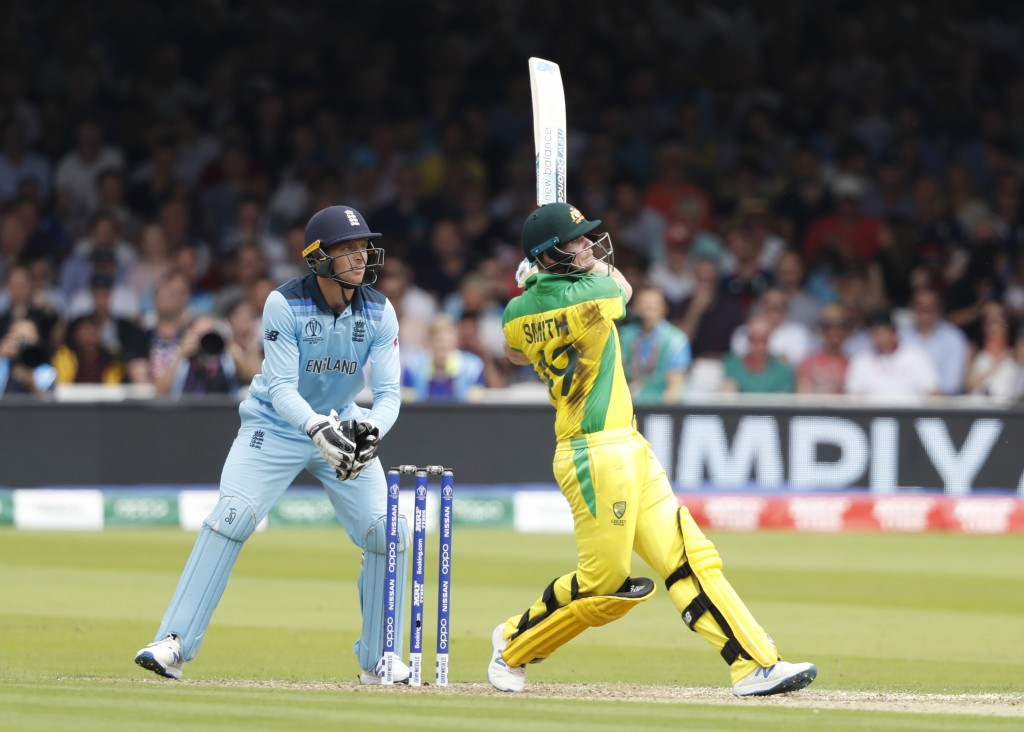 LONDON (AP) — Australia wasted a great start by captain Aaron Finch and David Warner against England to be limited to 285-7 in the Cricket World Cup at Lord's on Tuesday.

Australia was 185-3 in the 36th over after Finch was out for 100, his second century of the tournament. A big 300-plus score was on the cards but the batsmen conspired to get themselves out.

Finch and Warner, who made 53, shared 123 in their third century stand of the tournament, making England's gamble to bowl first apparently backfire.

But England rallied from the Finch wicket on. The only other major contributors were Steve Smith and Alex Carey, who both made 38.

The wickets were shared by five England bowlers, with paceman Chris Woakes returning the best figures of 2-46.

Australia has successfully bowled second on all four previous occasions in the tournament, including its last three matches when it defended 307 against Pakistan, 334 against Sri Lanka, and 381 against Bangladesh. The Australians also defended 288 against West Indies before losing to India batting second.

England has lost two of its three chases, including a target of 233 against Sri Lanka last Friday.

England gambled on bowling first after heavy overnight rain left conditions muggy and overcast. Some movement was found off the pitch, and Finch and Warner coughed up edges, misses, and drops just over or near fielders.

But the bowlers' lengths weren't spot on and the best opening pair in the tournament posted yet another century stand.

Finch and Warner have been out only once each in the first 10 overs of an inning so far. Finch was pulling too-short balls to the boundary and Warner, given three slips, soon scattered the cordon as he hit boundaries off Archer, Woakes, and Wood.

Their fifth consecutive 50 partnership came in the 12th over, and their third century partnership of the tournament in the 18th.

Finch reached his half-century in the 19th and Warner his in the 20th.

They were serene until on 123 in the 23rd over Warner was taken aback by Moeen Ali and mistimed to backward point, where Joe Root juggled the catch to end the Australian opener's 61-ball innings.

Finch shared 50 with Usman Khawaja, who should have been stumped on 9, and was beaten for pace and bowled by Ben Stokes for 23.

Finch reached his hundred only to depart on the next ball.

Woakes' throw in from the outfield was too high and a chance to run out Smith was missed, but allowed Finch to run a second and earn his 15th ODI one hundred and seventh against England.

The 116th did him in. He top-edged a hook at Archer, and Woakes took an easy catch at fine leg. The wicket gave Archer a tournament-leading 16th.

Australia was set to surge with Glenn Maxwell joining Smith in the middle.

But Maxwell was caught in two minds by Mark Wood and caught behind on 12, and Marcus Stoinis was run out on 8 even though he beat the throw. Smith hadn't wanted a second run, they didn't cross, and Stoinis kept running to the changing room.

Smith miscued Woakes and was caught at long on in the 46th over after 38 runs from 34 balls.

Pat Cummins was then caught behind, giving Woakes two wickets for three runs in four balls.

Alex Carey hit out for an unbeaten 38 off 27 balls, but England would have gone to the dressing room feeling better.