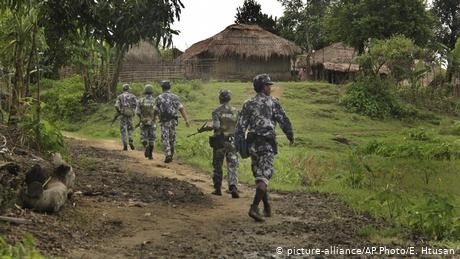 United Nations special rapporteur Yanghee Lee warned that Myanmar's military could be committing rights abuses under the cover of a mobile internet ban in Rakhine and Chin states.

Thousands of troop reinforcements have been deployed to the western region, where ethnic rebels are waging an insurgency for more state autonomy.

The internet blackout began on June 21 when the government ordered mobile providers to cut data services to nine townships.

"I fear for all civilians there," Lee said in a statement, calling for the restrictions to be immediately lifted. "I am told that the Tatmadaw [Myanmar's army] is now conducting a 'clearance operation,' which we all know by now can be a cover for committing gross human rights violations against the civilian population."

Read more: Myanmar's democracy is letting down a young generation

Cut off from the world

Telecoms operator Telenor Group said the Ministry of Transport and Communications had ordered a temporary shutdown of services because of "disturbances of peace" and the "use of internet activities to coordinate illegal activities."

Ministry permanent secretary Soe Thein told local media the measure was in line with Myanmar's Telecommunications Law, which allows for services to be blocked "when an emergency situation arises."

More than a million people live in the parts of Rakhine and Chin affected by the measures. Given that many do not own personal computers, the mobile blackout effectively cuts them off from the outside world.

Read more: 'I left my body there': A displaced Rohingya woman's story

Insurgents with the Arakan Army have been fighting government troops in the troubled region since late 2018, seeking more political economy for ethnic Rakhine Buddhists. Both sides have been accused of committing abuses. Some 35,000 civilians have been displaced by the conflict, which has also spilled into neighboring Chin state.

Read more: Opinion: In cozying up to Orban, Suu Kyi falls even further from grace

The statement from Lee, an independent expert who reports to the UN Human Rights Council on the situation in Myanmar, said there were credible reports army helicopters had launched an attack on Rakhine's Minbya Township on June 19. The following day, the Arakan Army fired on a navy ship in the state's capital, Sittwe, killing two soldiers.

The same area was the site of a brutal government crackdown in 2017 that sent around 750,000 Rohingya Muslims fleeing over the border to Bangladesh.

The military was accused of committing atrocities against the stateless ethnic minority, including arson, rape and mass killings. The military denies these allegations.