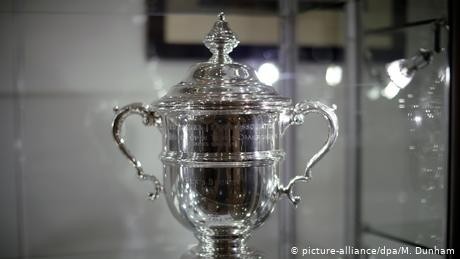 An online auction for a collection of Boris Becker's trophies and other personal memorabilia has resumed after the German tennis star withdrew an injunction to prevent the sale from happening, auction house Wyles Hardy announced this week.

The 82 items were first offered for sale in June 2018 to raise money for creditors but were later withheld amid a legal challenge from Becker. The tennis star has been wracked by financial problems for years, leading a London court last year to declare him bankrupt. The auction is generating interest from Becker's supporters and creditors.

"We hope and expect the sale will create the same level of excitement as it did last year, as this is a rare opportunity for tennis fans to acquire memorabilia of this kind," read a statement from the auction house.

Becker's items going under the hammer also include a used pair of socks, signed trainers, wrist bands, a track suit and a certificate from the 1992 Barcelona Olympics.

Last year, Becker's lawyers had argued the items on the auction block were personal items exempt from sale under bankruptcy law. In response, the trustees halted the auction, making it unnecessary to go to court for an injunction.

The timed online auction is underway and is expected to run until July 11, 2019.

Becker shot to fame as Germany's Grand Slam winning poster boy in 1985 when he was just 17. He remains the youngest men's singles Wimbledon champion. But his off-court indiscretions since then have not always endeared him to the public: They include a broom closet romp with a model while his first wife was pregnant, a tax evasion trial and a string of failed businesses.

Though Becker ultimately won six Grand Slam trophies and millions of dollars in prize money, the costly settlements of his various romantic entanglements, including divorce, have whittled his wealth away.

A series of business ventures have also proved unsuccessful, including an internet organic food firm and the Becker Tower in Dubai.

It was announced last year that Becker and his second wife, Dutch model Sharlely "Lilly" Kerssenberg, would separate.