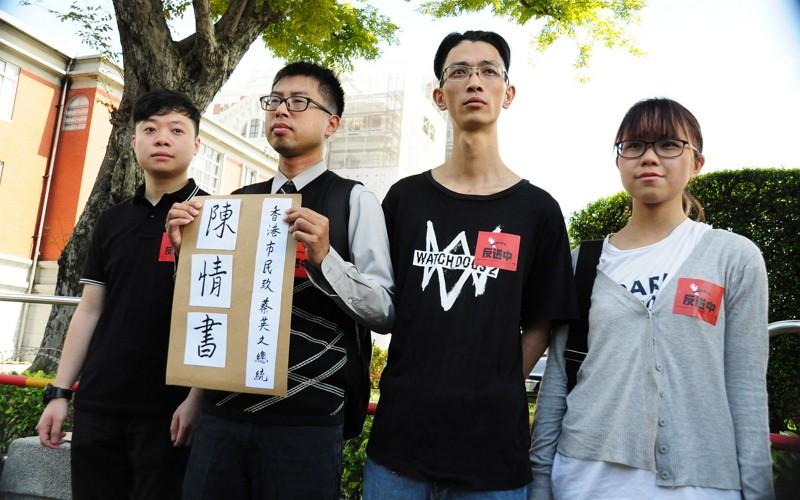 Several Hong Kong nationals delivered a petition to the Presidential Office on Tuesday to urge President Tsai Ing-wen (蔡英文) to speak up for Hong Kong and amp up international pressure on their government ahead of the G20 summit in Japan.

"Hong Kongers want the world to hear their voices ahead of the G20 summit, so we hope President Tsai can once again speak up (for Hong Kong) and cheer for Hong Kongers," Hong Kong citizen Yeung Ke-cheong (楊繼昌) said outside the Presidential Office before going inside with others.

The hope, Yeung said, is that Tsai can directly address the people of Hong Kong -- preferably in Cantonese -- and voice support for them as they prepare to hold another protest against the extradition bill Wednesday evening in the Central District.

"This will mean a lot to Hong Kongers, because we will know we are not alone," he said.

The 38-year-old Yeung said he and two Hong Kong friends flew to Taiwan on Sunday to deliver the petition, which he said had collected nearly 1,000 signatures online as of Monday.

He described it as part of a larger-scale effort by Hong Kongers to garner the support of governments worldwide for their anti-extradition bill movement. The group has also petitioned the United States and Japan so far.

The three, who knew before they left Hong Kong they would be received by the Presidential Office, decided to make the appeal to the Taiwanese government in person because they believed Taiwan and Hong Kong share close ties, Yeung said.

"President Tsai has also repeatedly touted Taiwan as a beacon of democracy for Asia, so we set our sights on the beacon and got here."

Many Hong Kong citizens are taking their case to foreign governments because they fear the Chinese and Hong Kong governments will "seek revenge" on the protesters after the conclusion of the G20 summit, which is scheduled for Friday and Saturday in Osaka, Japan, Yeung said.

They are hoping that with enough international attention and support, Beijing will be deterred from going too far, he said.

Chinese President Xi Jinping (習近平) is planning to attend the G20 summit, where he is expected to meet with U.S. President Donald Trump and discuss trade tensions between the two countries.

Zhang Jun (張軍), China's assistant foreign minister, said earlier this week, however, that Beijing will not permit any discussions about Hong Kong at the summit, saying it is China's internal affair.

The proposed extradition bill has raised concerns that it could threaten the human rights of the people of Hong Kong, as it would allow the Hong Kong authorities to extradite crime suspects to China, and subject them to its arbitrary judicial system.

The Hong Kong government has suspended the bill's legislative process indefinitely following the protests in the region that saw more than 1 million people take to the street earlier this month.

Asked whether Tsai will respond to the petition and deliver a talk, Presidential Office Spokesman Ting Yun-kung (丁允恭) sidestepped the question, saying only that the Taiwanese government will continue to express its concern for Hong Kong in an appropriate manner and through a proper role.

Ting said Taiwan's stance on the extradition bill is consistent with other major democracies in the world, which is to pay close attention to its development while supporting the Hong Kong people's aspiration for freedom, democracy and human rights.