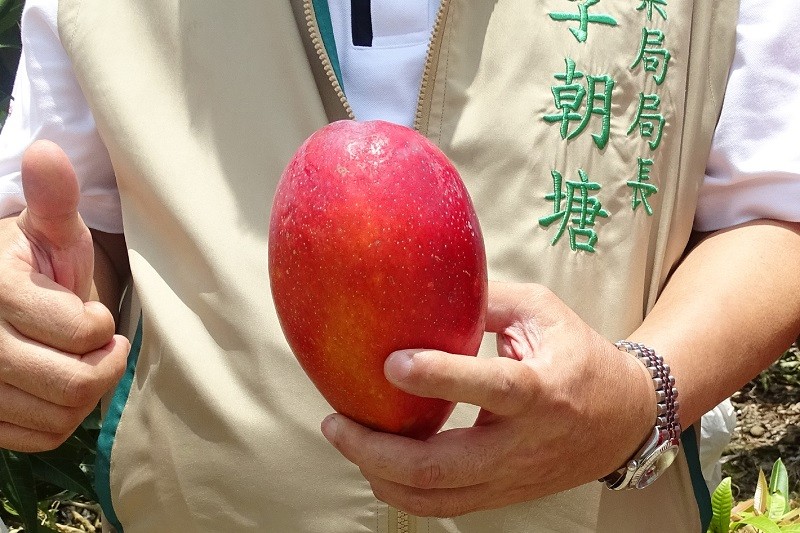 The mangoes grown by local farmer Wang Wen-rui (王文瑞) are a case in point.

Most of the top quality Irwin mangoes in the area, which are locally called the " fruit of the sun (太陽果)," are pre-ordered for export to Japan. Wang has grown many of these “fruit of the sun.”

Even so, he reserves some of his mangoes for the domestic market, but he only sells them to customers he is familiar with.

This year, some of his “fruit of the sun” will be delivered to Tainan Mayor Huang Wei-che (黃偉哲) for sale at a charity on July 13, Central News Agency (CNA) reported.

Wang said that most people know that mangoes grown in this area of Tainan, with its chalk soil and mudstone, are the sweetest and most fragrant despite their smaller size, according to the news outlet.

The upper layer of the earth in the hills around the reservoir is composed of mudstone, which retains water, while the lower layer contains chalk soil, which has excellent permeability, said Wang. He added that coupled with the humidity from the reservoir, the area makes for an ideal mango-growing environment, reported CNA.

The 60-hectares-area yields about 3,000 tons of the Irwin mangoes every year and has brought moderate wealth to the once-poor hill community, the news outlet reported.

According to Wang, Irwin mangoes grown in the area are frequent winners of mango contests. Tainan Agriculture Bureau Director Lee Chao-tang (李朝塘) said that in order to be labeled the "fruit of the sun,” an Irwin mango has to meet several criteria. It must, for instance, weigh at least 550 grams, be ripe and red in color, and have a sweetness level of 15 Brics, CNA reported.

Mango farmers around Jingmian Reservoir have formed self-marketing groups, and the "fruit of the sun” they have cultivated over the decades has earned its high reputation.

Lee informed CNA that mayor Huang had instructed his staff to keep promoting the mangoes and study the possibility of turning the area into sightseeing orchards. This would result in domestic customers buying directly from local mango growers, allowing more Taiwanese to enjoy the high-quality fruit while increasing earnings for the farmers.