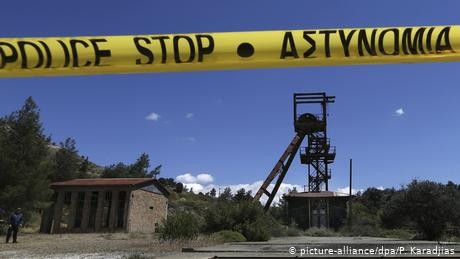 On Monday, the three-judge panel handed him seven life terms of 25 years each, with five of the terms running consecutively.

Metaxas read out a handwritten statement apologizing to his victims, saying he could not explain why he carried out the killings.

The trial marked the first time in Cyprus that a defendant has faced seven counts of premeditated murder, making him likely the first serial killer in the Mediterranean island's history.

In reading out their decision, the judges said the defendant "didn't even hesitate to kill children" during a "campaign of murder" that lasted over two years.

Prosecutors said Metaxas sought out his adult victims using online social networks between September 2016 and the summer of 2018.

During that time, he killed four Filipino women and one of their daughters, as well as a Nepalese woman and a Romanian woman and her daughter.

Six of the victims were strangled to death, while the seventh sustained a massive head injury.

The first body was uncovered in April by a German tourist who was taking pictures of a shaft at an abandoned ore mine. The body came to the surface of the 150-meter (500-foot) shaft following heavy rains.

The discovery of the first body prompted a manhunt for Metaxas, who eventually led investigators to the locations of his other victims, including a toxic lake near the capital, Nicosia.

Anger over 'negligence' by police

The case sparked outrage in Cyprus as well as accusations of police racism, as it emerged that police had failed to follow up on reports that the women had gone missing.

President Nicos Anastasiades criticized the police for "apparent negligence and dereliction of duty," and said better investigations at the beginning could have saved lives.

The widespread criticism prompted the resignation of the Cypriot justice minister in May, in addition to the dismissal of the chief of police.