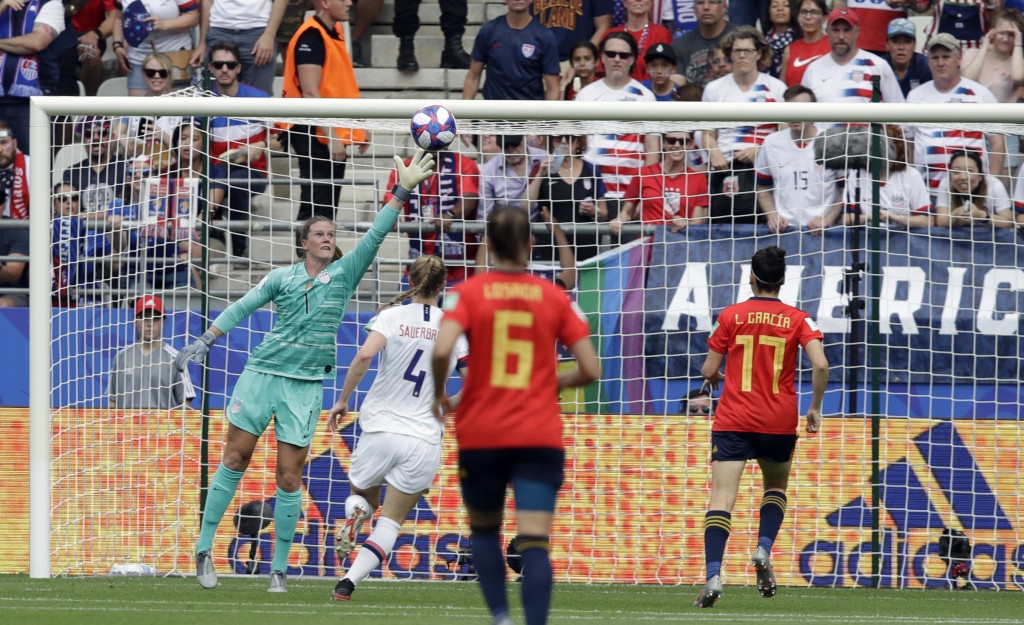 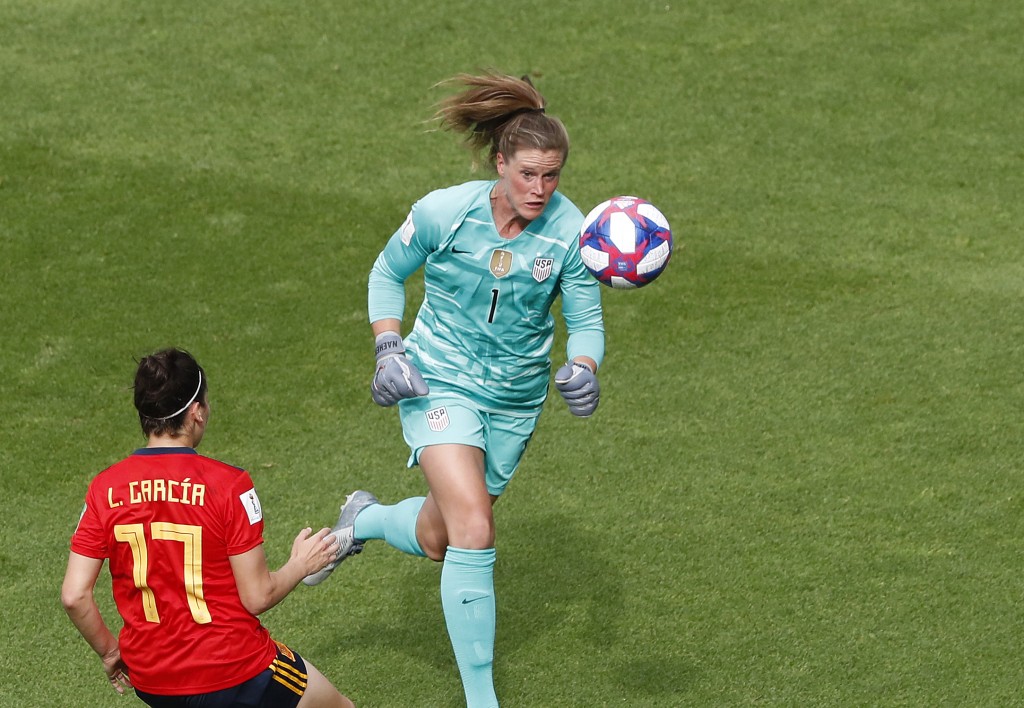 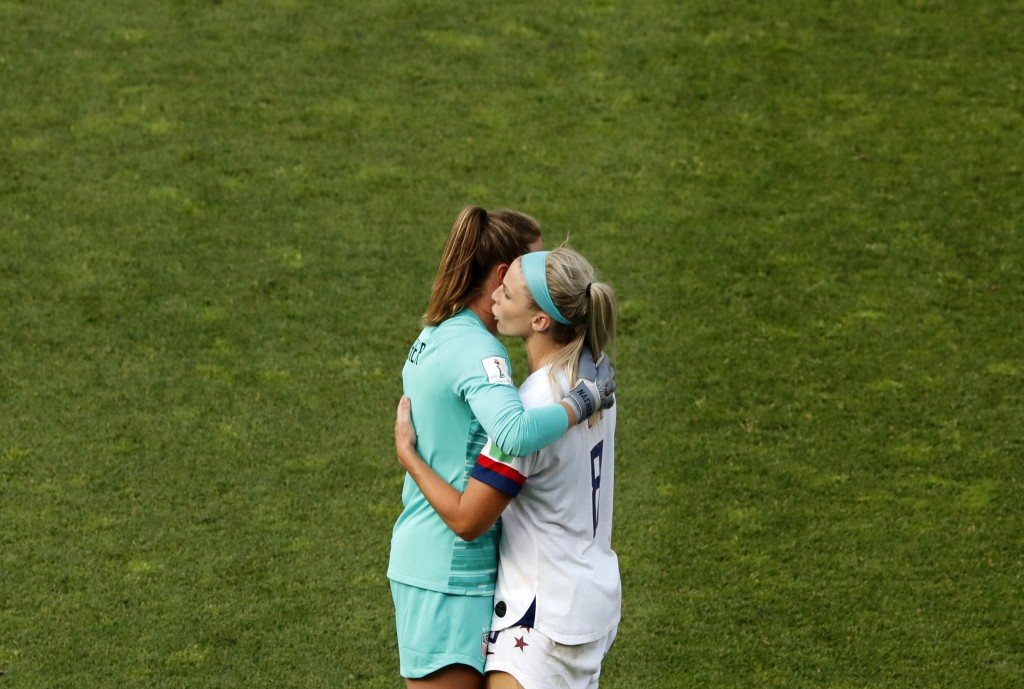 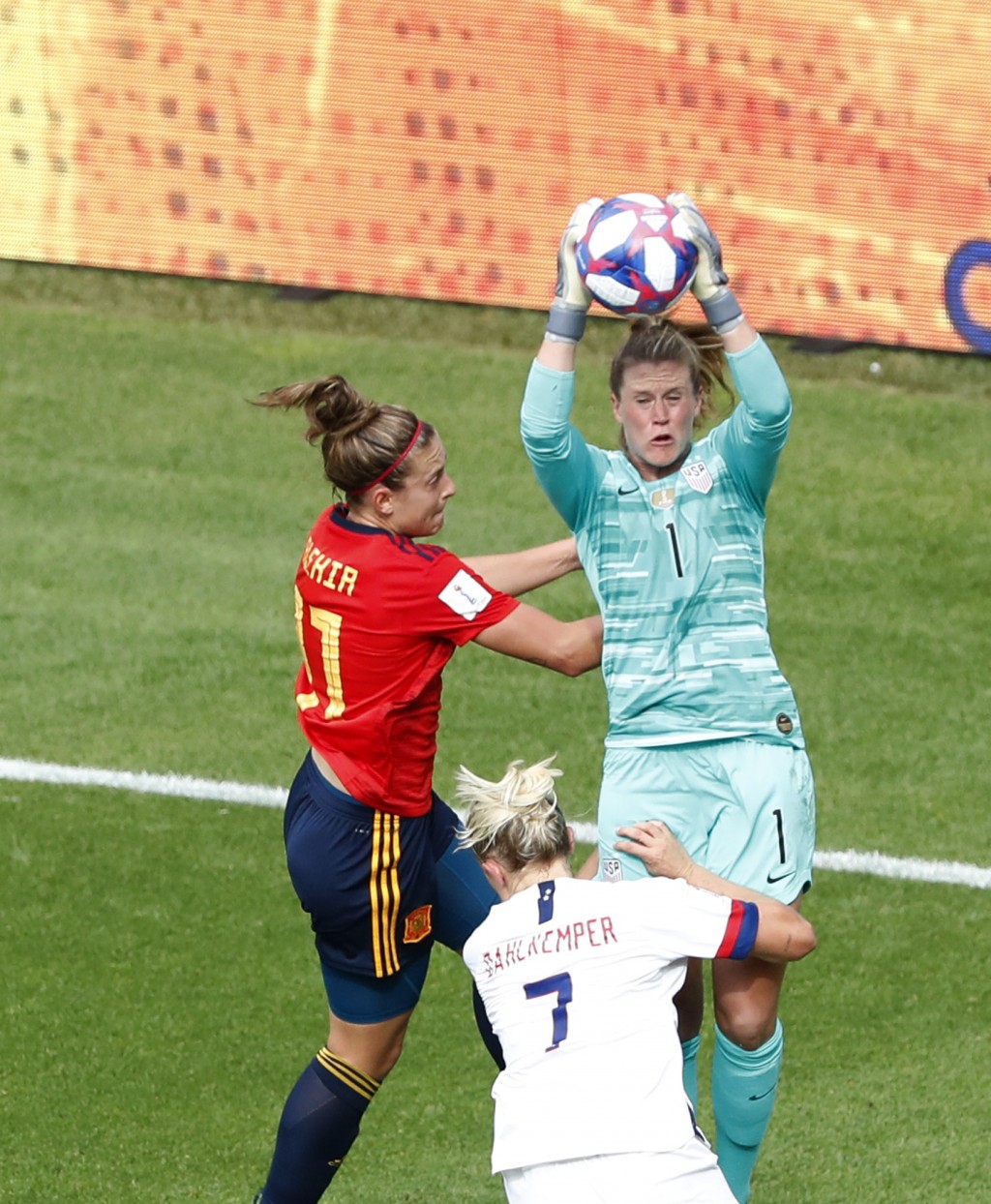 After three games with little to do, the 31-year-old American goalkeeper blundered in her first World Cup knockout match, playing a short pass to Becky Sauerbrunn that led to Spain's tying goal just 2 minutes, 40 seconds after the United States had taken the lead.

"Those moments, they can absolutely destroy your team," American coach Jill Ellis would later say.

Naeher rebounded — mentally and physically. Spain treated her like a tackle dummy, but with a couple of spectacular grabs in traffic and punchouts, she kept the score tied. The Americans regrouped for a 2-1 victory behind Megan Rapinoe's second penalty kick goal in the 75th minute and will play France in a quarterfinal on Friday, the first World Cup matchup between the U.S. and a host nation.

"We grinded this one out," Naeher said. "You have to be short-term memory as a goalkeeper and it's not ideal, but there's still 75 or 80 minutes to play, and you can't dwell on something that happened, You can't change it."

Her predecessor, Hope Solo, is at the World Cup working for BBC, casting a shadow over Naeher like the fake silhouettes of trees in the French surrealistic classic, "Last Year at Marienbad." Solo, a 2015 World Cup champion and two-time Olympic gold medalist, pretty much says over and over: She's not me.

Entering the tournament, the relatively untested Naeher was a focal point of those evaluating the top-ranked Americans' chances of repeating as champion.

"When we have an attack as potent as ours, you have to find a narrative, and so why not it be the untested backline or the untested goalkeeper?" Sauerbrunn said. "I don't know if it's unfair. I think it's just how soccer is."

For now, Solo's shots have not made their way back to her former team.

"We are in kind of like a very small bubble and we're trying not to pay attention to much outside of it," Sauerbrunn said,

The canicule set in, as the French term a heat wave, and the temperature at kickoff was 89 degrees at Stade Auguste-Delaune.

When the final whistle blew, a drained Naeher looked at teammates and dragged a glove-covered finger across her forehead, what appeared to be an emphatic: Whew!

Given the match took place in the Champagne region, she could have been forgiven if she had broken out some Perrier-Jouët or Moët & Chandon to wash down her postgame chow.

But Naeher fulfilled the prophecies of the doubters when she passed to Sauerbrunn only for Lucia Garcia to strip the ball and pass to an open Jennifer Hermoso, whose 22-yard right-footed shot easily eluded the outstretched hand of a leaping Naeher.

"The one debacle that we had," Sauerbrunn said. "Then she came up big on a couple of free kicks, and cleared some balls really well. So I don't think she really struggled. I think that was just one big mistake and I think she actually responded super well to it."

"I just need to make a smarter decision, not play it into a pressure pocket, and probably better just to put it up the field a little more and play higher up," she said.

Naeher had another moment that caused Americans to gasp when her attempted clearance in the 27th minute struck Hermoso. Then she settled in. Ellis described some of Naeher's moves after balls in the box as "big and brave."

"As much experience as we have, we have some debutantes on the roster," Ellis said. "It was great that some of these players that have never played in a World Cup experienced a tight game."

Naeher defended her territory. When Virginia Torrecilla plowed into Naeher's chest in the 80th minute, the wind was knocked out of the goalkeeper. Spain's players were tough and physical in all parts of the field.

"I was feeling it," American forward Alex Morgan said, "Our chiropractor is here and I don't think we need him anymore. I got a good crack."

Naeher smiled. The bruises didn't hurt nearly as much now that the Americans had won. She learned when she gets sent sprawling at the World Cup, she can bounce back up.