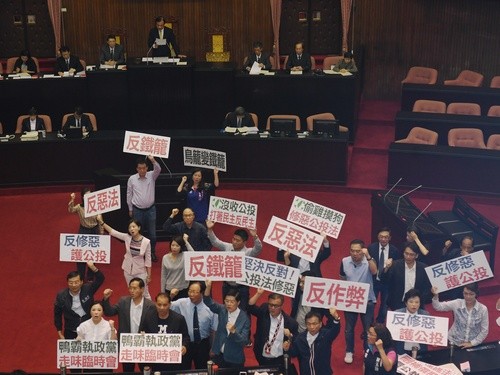 TAIPEI (Taiwan News) – Following the amendments to the Referendum Act made last week, the Kuomintang (KMT) party is calling on supporters to join in a protest against the new amendments, which they claim go against the democratic spirit of the original Referendum Act.

A protest against the new amendments to the Referendum Act is scheduled for July 7 on Ketagalan Boulevard, reports the Liberty Times, with all of the KMT presidential primary candidates planning to attend. Ex-Vice President Annette Lu (呂秀蓮), who recently voiced strong opposition to the amendments, has also been invited to speak at the gathering in central Taipei.

On June 17, Taiwan’s lawmakers passed an amendment to the Referendum Act that ensures that no referendum will be held alongside the 2020 presidential election. All referendums will now be postponed until August 2021, and thereafter referendums will take place on the fourth Saturday of August every other year.

On June 18, Annette Lu said that the ruling Democratic Progressive Party (DPP) should apologize for its arrogance in pushing through the piece of legislation. Lu claims that reducing the threshold for referendum proposals are to blame for the confusion of last November's nine-in-one elections.

The demonstration planned for July 7 is intended to protest the Tsai administration’s handling of the act and serve as a venue for dissatisfied citizens to air their grievances with the current administration, Liberty Times reports.