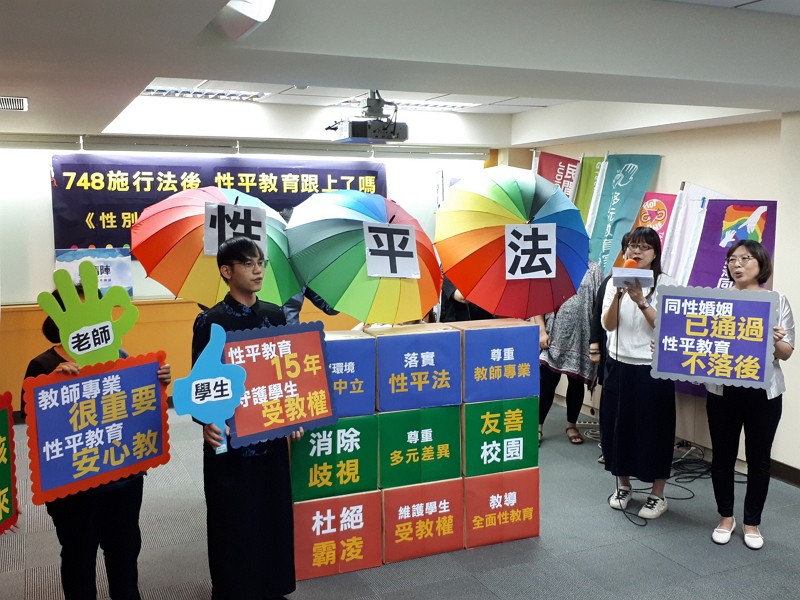 A legislator and several civic groups called on the government Sunday work harder toward achieving gender equality in schools, at an event to mark the 15th anniversary of a law to raise gender awareness among students and protect the rights of young people regardless of their gender identity or sexual orientation.

Speaking at a press conference in Taipei, Democratic Progressive Party (DPP) Legislator Yu Mei-nu (尤美女) said 2019 is an important year in Taiwan, as it marks the country's legalization of same-sex marriage, the 15th anniversary of its Gender Equity Education Act, and its planned introduction of a new 12-year national education curriculum in August.

Despite those achievements, Yu said, about 7 million Taiwanese voted last November in support of a referendum that called for a ban on homosexual-related education in elementary and junior high schools.

"The passage of that referendum has dealt a major blow to long-time advocates of gender equality education and has subjected children with different gender traits or sexual orientation to more pressure and difficulties," Yu said.

Li Ya-jing (李雅菁), vice general secretary of the National Teachers' Association of the Republic of China (ROC), said the public should not forget about the incident that prompted the legislation of the Gender Equity Education Act.

Li was referring to the case of Yeh Yung-chih (葉永鋕), a junior high school student who was found dead on the bathroom floor at his school on April 20, 2000. Prior to his death, Li allegedly had been a victim of constant bullying at school because of his effeminate manner.

Although a high court concluded in 2006 that Yeh had been hurrying to return to class and had slipped and fallen, his death prompted the promulgation of the Act in 2004 to "promote substantive gender equality, eliminate gender discrimination, uphold human dignity, and improve and establish education resources and an environment of gender equality."

Under the law, schools are also required to provide a gender equitable learning environment, and give respect and due consideration to students, regardless of their gender, gender disposition, gender identity, or sexual orientation.

"The reality, however, is that public opinion remains hostile toward teachers who try to implement gender equality education," Li said. "Some have been sued … or have had their words taken out of context."

She said the professional autonomy of teachers should be respected and guaranteed, as stipulated in Article 8 of the Educational Fundamental Act.

"We will safeguard the rights of teachers who implement gender equality education in accordance with the law," Li said.

Also speaking at the press conference, an activist who asked to be called Vivian said the government needs to employ more teachers with awareness of gender issues.

Such teachers will be able to provide guidance and emotional support to students who become victims of bullying due to their gender identity, said Vivian, who is in a same-sex relationship and has a 4-year-old daughter.

She also suggested that the Ministry of Education establish a special fund to explore how to better include diverse family structures and same-sex topics in textbooks and to stock more gender friendly picture books in school libraries.

"Gender equality is about diversity and respect, which are supposed to be the core values of education," Vivian said.