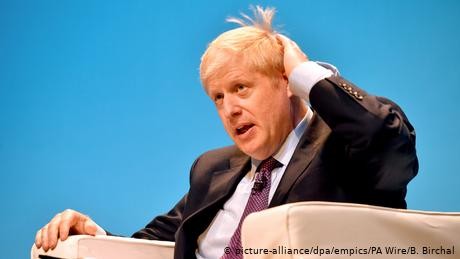 Boris Johnson, currently leading the race to be Britain's next prime minister, appears to have been caught in a lie about his ties to Steve Bannon, former campaign manager and chief strategist to President Donald Trump and former executive chairman of the far-right news website Breitbart News.

The UK's Observer newspaper on Saturday released a video clip showing Bannon discussing his advice to Johnson for a key speech the former British foreign secretary made in the UK parliament shortly after his resignation. Johnson has previously denied he has had any association with Bannon, once describing the notion as "a lefty delusion."

"So today we're going to see if Boris Johnson tries to overthrow the British government," Bannon can be heard saying in the clip, while looking at a Daily Telegraph article about Johnson's resignation in July 2018. "I've been talking to him all weekend about this speech."

The former Trump ally goes on to say that he told Johnson to use the address to describe the UK's withdrawal from the European Union as its "independence day," a theme that Johnson had taken up himself previously.

The footage was filmed by US filmmaker Alison Klayman for an upcoming documentary on Bannon entitled The Brink. The clip in question appears to have been filmed during a tour of Europe Bannon took last summer, when he met several far-right leaders across the continent.

Klayman can be heard in the clip interviewing Bannon about Johnson. Bannon says that he had got to know Johnson "quite well" following the referendum to leave the European Union in June 2016, and expresses admiration both for his speeches and his book on Winston Churchill.

According to the Observer, the two had been in close contact around the time of Johnson's resignation last year, when the foreign secretary resigned from Prime Minister Theresa May's government over her EU withdrawal deal.

Johnson, currently well ahead in the race to succeed May as head of the Conservative Party, was one of the leaders of the Leave campaign, and has not ruled out leaving the EU without a deal.

Trouble for the next prime minister

A spokesman for Johnson told the Observer: "Any suggestion that Boris is colluding with or taking advice from Mr Bannon or Nigel Farage is totally preposterous to the point of conspiracy." But the spokesman did not repeat earlier claims from Johnson's team that he had not been in contact with Bannon.

Johnson's ties with Bannon had previously been reported by the journalist Matthew d'Ancona, who credited the "self-appointed guru of the populist right" with encouraging Johnson to use more radical political language.

It was after speaking to Bannon, d'Ancona claimed in the Guardian newspaper last September, that Johnson compared Muslim women wearing niqabs to bank robbers and "letter boxes." He also later described May's negotiating position with the EU as a "suicide vest."

The news comes at the end of a difficult week for the Conservative leadership frontrunner, after revelations that police were called to a domestic row with his partner Carrie Symonds. Senior Conservatives have since raised concerns about his suitability for the office.

Bannon, erstwhile Goldman Sachs investment banker and sometime film producer, earlier this year re-launched a Brussels-based organization called "The Movement" in an attempt to unite populist right-wing parties across Europe ahead of May's EU parliamentary elections. However, some of its natural political bedfellows, including the Alternative for Germany (AfD) and the Freedom Party of Austria (FPÖ), did not join.