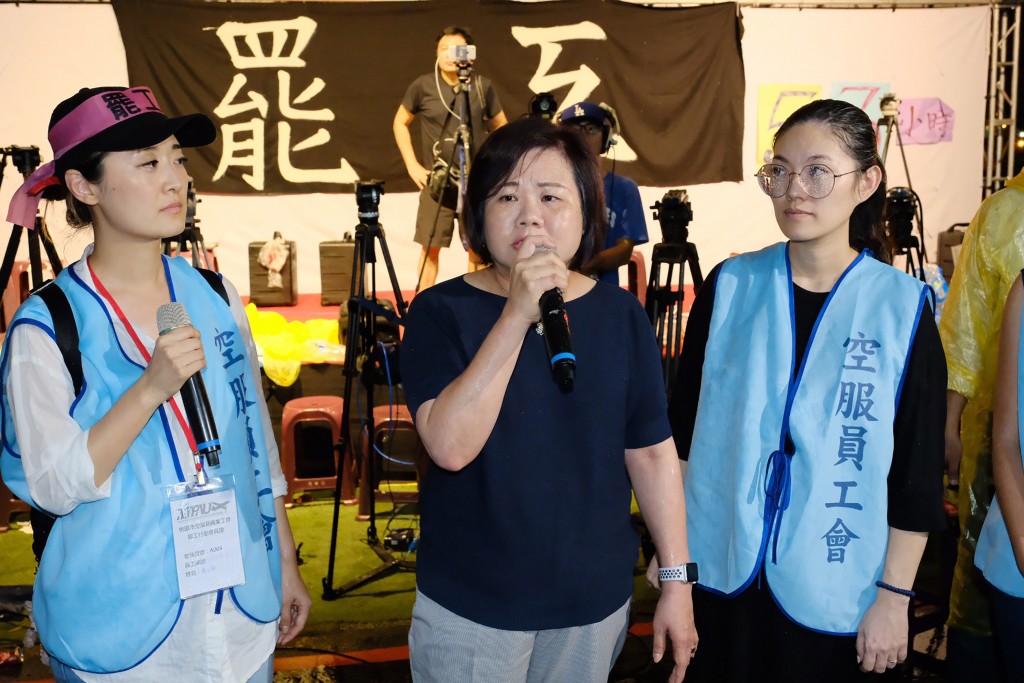 The ministers of transportation and labor expressed divergent views Saturday on whether Taiwan should introduce a law to stipulate that aviation workers must give notice if they plan to strike.

The issue, which has been under discussion since 2016 when China Airlines (CAL) flight attendants went on strike, has come to the fore again with the industrial action taken Thursday by EVA Air flight attendants.

Transportation Minister Lin Chia-lung (林佳龍), who cut short a visit in Belize because of the EVA Air strike, said there should be clear rules requiring aviation workers to give notice of an impending strike.

His comment came amid hundreds of flight cancellations since June 20, when EVA Air flight attendants started a strike less than two hours after talks between their union and the airline broke down. By June 29, the number of canceled flights due to the strike is expected to rise to around 670.

Labor Minister Hsu Ming-chun (許銘春), however, said that in the EVA Air case, there was no need for the union to give notice of the strike, since it had already held a vote among its members weeks before that resulted in a decision on June 7 to take industrial action if the negotiations failed.

That was a legal procedure under the Act for Settlement of Labor-Management Disputes and served as notice of the strike, Hsu said, adding that it is up to the Ministry of Transportation and Communications (MOTC) to review the Civil Aviation Act to see whether amendments are necessary.

At a legislative hearing on March 20, Hsu told lawmakers that she did not think there was need for a law stipulating notice should be given ahead of a strike.

"The labor ministry's position is to protect the right of workers to strike," she said at the time.

On Saturday, however, Hsu said her ministry is open to further discussions on the issue as long as there is no infringement on workers' rights.

Among lawmakers, meanwhile, there was no consensus on the issue either. In a Facebook post, DPP Legislator Yeh Yi-jin (葉宜津) she had proposed an amendment to the Civil Aviation Act to allow at least seven days' notice before a strike in the aviation industry to ensure that the affected carrier could maintain transportation capacity of at least 40 percent.

The ruling Democratic Progressive Party (DPP) legislative caucus said the agenda for the current legislative session is already fixed and there can be no discussion on the strike notice issue until the new session starts in September.