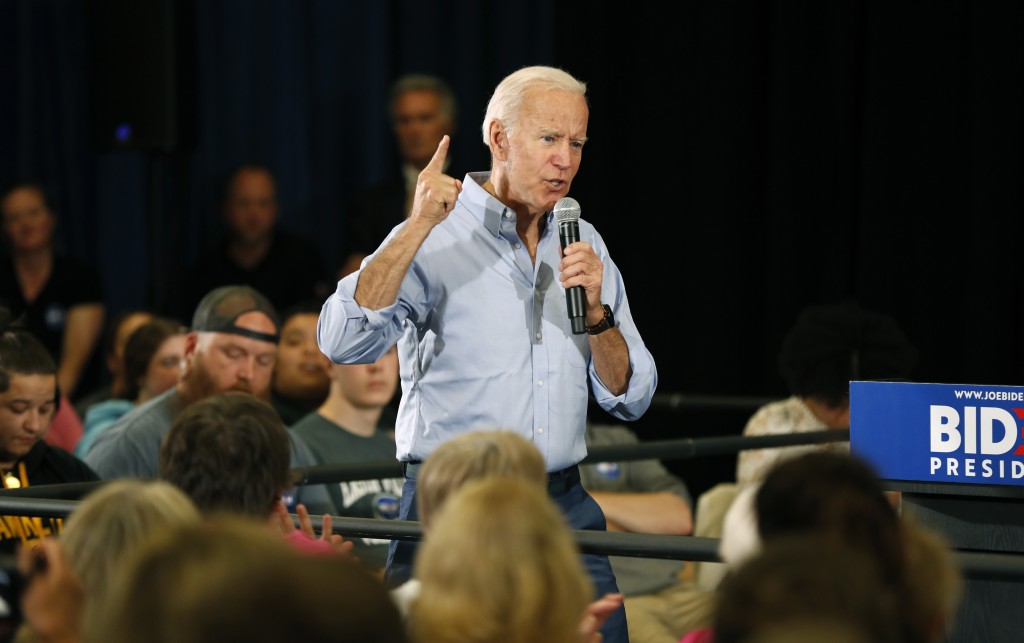 Joe Biden has sat atop the crowded Democratic presidential field from virtually the moment he joined the race, leading the polls, raking in money and campaigning with the air of an inevitable nominee. But his recent fumbles on abortion and race are a reminder that early front-runners often face the most intense scrutiny.

The former vice president's strengths and weaknesses will be on display this weekend when he joins virtually every other White House hopeful in South Carolina.

Following controversial comments about his past work with segregationists, Biden will make appeals to African Americans, including at a closed-door meeting with black leaders on Friday afternoon. And after sparking a fury this month by saying he didn't back federal funds for abortion — only to quickly reverse his position — he'll appear before abortion rights activists at a Planned Parenthood forum on Saturday.

His reception in the state that's home to the first Southern primary will set the tone for an even bigger stage next week, when 20 White House hopefuls — including Biden — gather in Miami for the first debate of the primary. The biggest question going into the pivotal stretch ahead is whether voters have already digested Biden's tendency for clumsy comments and are sticking with him in the belief that he's best positioned to beat President Donald Trump. And with many voters only now beginning to pay some attention to the campaign, some Democrats say Biden's rough week won't have a long-term impact.

This is the kickoff of the campaign preseason, and "the regular season starts next week," said South Carolina Democrat Antjuan Seawright, an unaligned party strategist. Even after weeks in the spotlight, "it's still everyone else trying to catch Joe."

Still, Biden's vulnerabilities as a candidate are increasingly clear. His comment at a New York fundraiser this week that the Senate "got things done" with "civility" even when the body included segregationists with whom he disagreed sparked outrage from many Democrats, including two black candidates who are also seeking the party's nomination — Sens. Kamala Harris and Cory Booker .

The Biden campaign has sought to minimize any potential damage, arguing that, taken in full, Biden's remarks on his former Senate colleagues make clear that he fought segregationists on matters of race. Aides insist his overall argument for a more functional government is a winner, even in a primary.

He called Booker on Wednesday night, but that seemed to do little to mitigate the tension. The New Jersey Democrat's campaign released a statement on Thursday calling on Biden to "take responsibility for what he said and apologize to those who were hurt."

The episode suggested Biden was struggling to adjust to the level of attention paid to the words of a front-runner. And like the abortion debate weeks earlier, Biden found himself open to criticism that he's out of touch with a party that is getting younger, less white and more liberal.

"On its face, I don't think Joe Biden said anything intentionally racist," said Quentin James, the founder and executive of Collective PAC, which works to elect people of color. "I just think he's going to have a hard time this election cycle catching up to where our society is politically."

Biden isn't expected to change his tactics. Aides said he will use his trip to South Carolina to reinforce a message of unity and helping the middle class, while implicitly conveying his pitch that he's the ideal nominee to oust Trump. One aide, who like the others spoke on condition of anonymity to discuss strategy, said campaign insiders were not pressuring Biden to alter the way he's been making his case.

"Look, Joe Biden isn't going to stop being Joe Biden, so why would I tell him to even try?" said state Sen. Dick Harpootlian, a former state party chairman and longtime friend of the Biden family. "People here know Joe Biden," Harpootlian added, "because he's been coming here for years. This doesn't damage him here, with blacks or whites."

Indeed, those older voters also are accustomed to watching black and white South Carolina politicians, including former segregationists, work together.

The senior South Carolina Democrat in Congress, House Majority Whip Jim Clyburn, made that point in Biden's defense this week. The highest-ranking black member of Congress, Clyburn noted that he spent decades working with Sen. Strom Thurmond, once a full-throated segregationist who left the Democratic Party to become a Republican when national Democrats began supporting civil rights for African Americans after World War II.

Biden eulogized Thurmond when he died in 2003. He did the same earlier this year when another South Carolina politician and onetime segregationist, Democrat Fritz Hollings, died.

Seawright, the black party strategist, said the best avenue for any Biden rival to cut into his South Carolina lead may be through younger black voters who aren't as loyal to Biden. He said Booker, Harris and Massachusetts Sen. Elizabeth Warren have been aggressive on that front.

"Biden's relationships are deeper and generational," Seawright said. "So maybe the best way to beat him is to go make your own relationships."