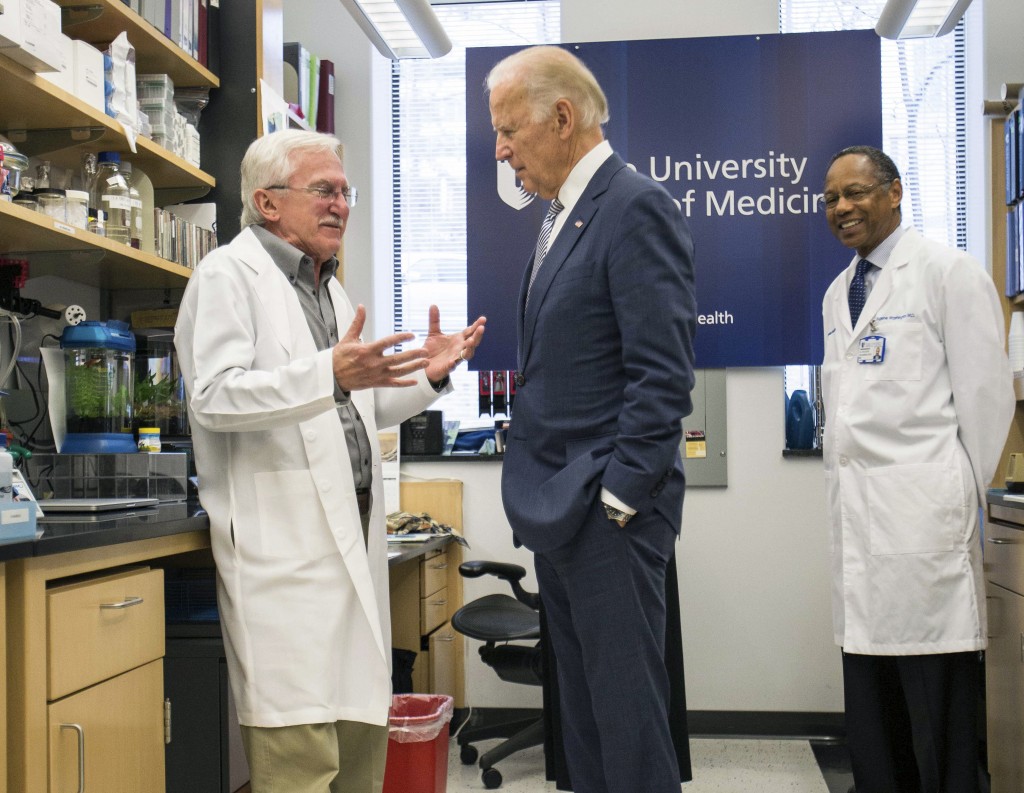 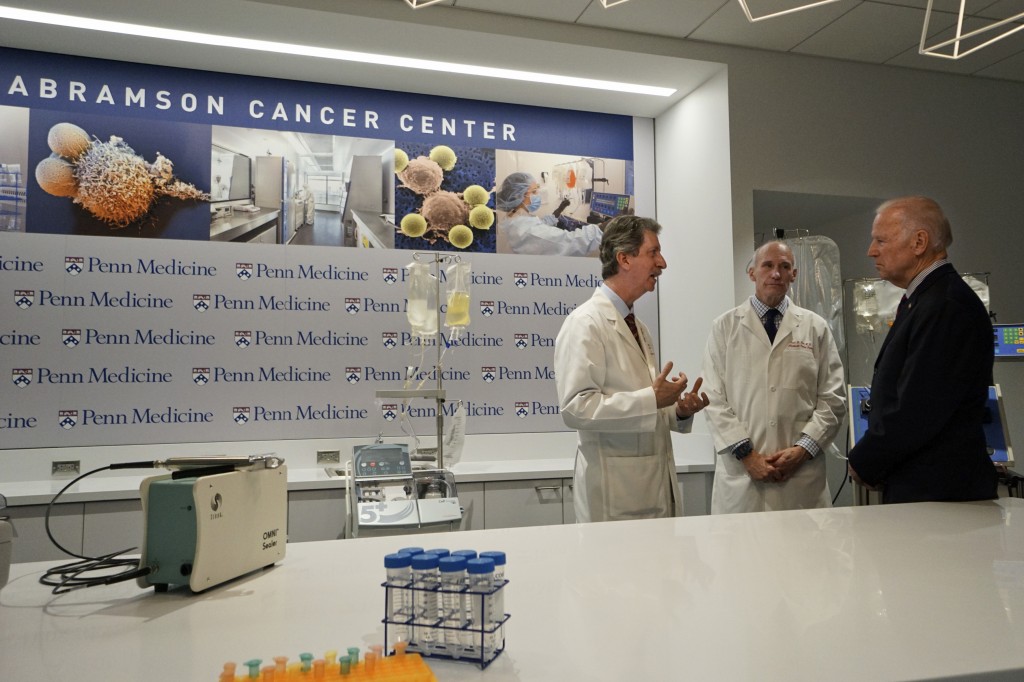 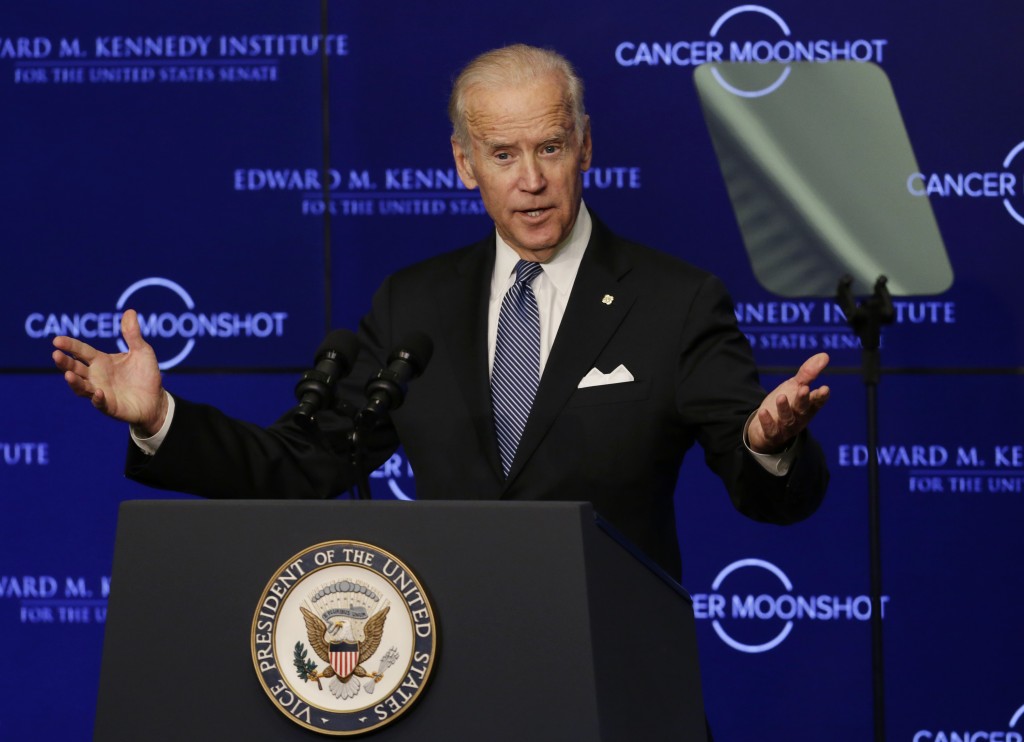 WASHINGTON (AP) — Joe Biden was on friendly turf when he appeared in January 2018 at a San Francisco health care conference to tout the work of his Biden Cancer Initiative, the nonprofit that has been his defining venture since leaving the Obama White House more than two years ago.

The former vice president first thanked his physician son-in-law, Dr. Howard Krein, a board member of the Biden nonprofit and a top executive of the health care tech company that hosted the event. Next, Biden called out to "one of my closest friends" in the audience, Joe Kiani, a medical device firm mogul and longtime donor.

"Imagine," Biden told his standing-room-only crowd, "what we can do together."

Since leaving office, Biden has made it his mission to mobilize the health care industry to fight cancer as a tribute to his son Beau, who succumbed to the disease in 2015. Biden enlisted family, friends and donors and has promoted his crusade at health care industry events. And drug companies, hospitals, insurers, medical associations and charities have pledged millions to the cause. In its first two years, the Biden Cancer Initiative has listed 58 separate collaborations joined by more than 200 health care companies and other groups.

Now that Biden is running for president those relationships highlight his reliance on a powerful industry with much at stake in the outcome of the 2020 race. Many of the organizations he's celebrated — including some tied to the men Biden mentioned in the 2018 speech — have financial or regulatory interests before the federal government. A Biden administration would inevitably have to reckon with their efforts to influence its policies, ethics experts say.

The nonprofit's reliance on health care industry partners poses concerns about whether a "Biden administration would give favorable treatment for anyone who supported his foundation in the past," said Arthur Caplan, professor of bioethics at New York University.

At a campaign stop last week in Ottumwa, Iowa, Biden made clear his aim to mount a government-run cancer-fighting effort. "I promise you, if I'm elected president, you're going to see the single most important thing that changes in America is we're going to cure cancer," he said.

Biden's campaign said his nonprofit's operations would not be incorporated into a Biden administration cancer-fighting effort. That could mean the nonprofit might continue dealings with health care industry organizations with Biden in the White House.

To defuse ethics concerns, Biden and his wife, Jill, dropped off the nonprofit's board in April. And Biden's campaign told The Associated Press that if elected, he would issue an executive order and staff guidance enforcing "the highest ethical standards." Biden's campaign did not provide details, but cited President Barack Obama's 2009 order, which tightened ethics standards and limited the hiring of lobbyists.

The nonprofit discloses the names of its partners but much less on their financial pledges. An AP review of all 58 collaborations found precise funding figures available for only 13 partnerships, totaling more than $400 million. The nonprofit expects to provide more dollar figures in future updates.

The Bidens launched their cancer nonprofit in June 2017 to carry on the work of the White House Cancer Moonshot Task Force, the anti-cancer effort Biden headed in his final year as vice president. Greg Simon, who directs the Biden nonprofit and had a similar role with Cancer Moonshot, said the Biden Cancer Initiative takes no direct donations from drug companies and its grants have no restrictions on their use, he said.

The bulk of the money supporting Biden's nonprofit comes in the form of indirect pledges. Those commitments do not directly aid the Biden Cancer Initiative, but instead are used by participating organizations to fund research and work.

Biden's 2018 appearance at the StartUp Health Festival in San Francisco showed how some of those he has celebrated have ties to health care industry groups with interests before the federal government.

Krein, married to Biden's daughter, Ashley, is on the Biden Cancer Initiative's board while working as chief medical officer at StartUp Health, a venture capital and health tech firm, which lobbied the government last year on health industry technology regulations.

In his 2018 StartUp speech, Biden also hailed Kiani, whose Masimo Corp. is a leading manufacturer of patient monitoring equipment and spent $80,000 a year between 2013 and 2018 on federal lobbying, including efforts to suspend or eliminate a tax on medical device products.

Biden's campaign said he backed the medical device tax during the Obama administration and continues to support it.