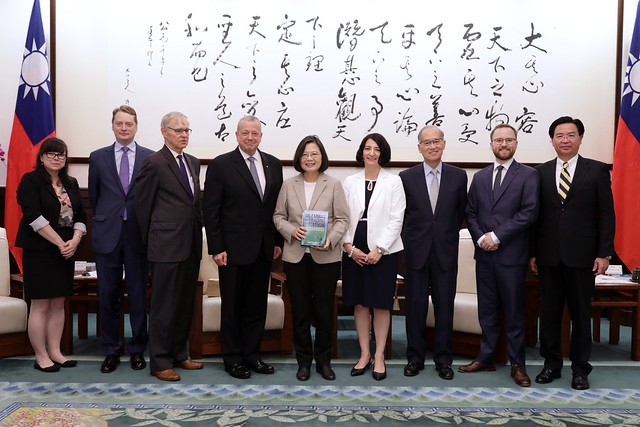 President Tsai Ing-wen said June 18 that Taiwan is committed to working with the U.S. in boosting bilateral ties and advancing a more free and open Indo-Pacific.

The two sides are strengthening cooperation across the board as they celebrate the 40th anniversary of the Taiwan Relations Act, Tsai said. This is demonstrated by growing exchanges in areas spanning culture, national defense, security and trade, she added.

Deepening ties are also underscored by the recent renaming of the Taiwan Council for U.S. Affairs, Tsai said. Formerly known as the Coordination Council for North American Affairs, TCUSA was established in 1979 to handle official exchanges with the American Institute in Taiwan.

Tsai made the remarks while receiving a delegation from Washington-based think tank the Brookings Institution at the Presidential Office in Taipei City.

Led by Brookings President John Allen alongside Richard C. Bush, senior fellow and former chairman and managing director of the AIT, the six-member delegation is in country on a political fact-finding visit. The group also participated the previous day in the inaugural conference for the institution’s Sustaining the East Asian Peace project.

According to Tsai, the decision to host the first meeting of the research initiative in Taiwan spotlights the country’s important role in upholding regional stability.

The Taiwan-U.S. partnership is a powerful force for promoting peace and prosperity in the Indo-Pacific, Tsai said. Joint efforts in this regard include the co-staging of 19 capacity building workshops for officials and experts from across the region under the Taiwan-U.S. Global Cooperation and Training Framework, she added.