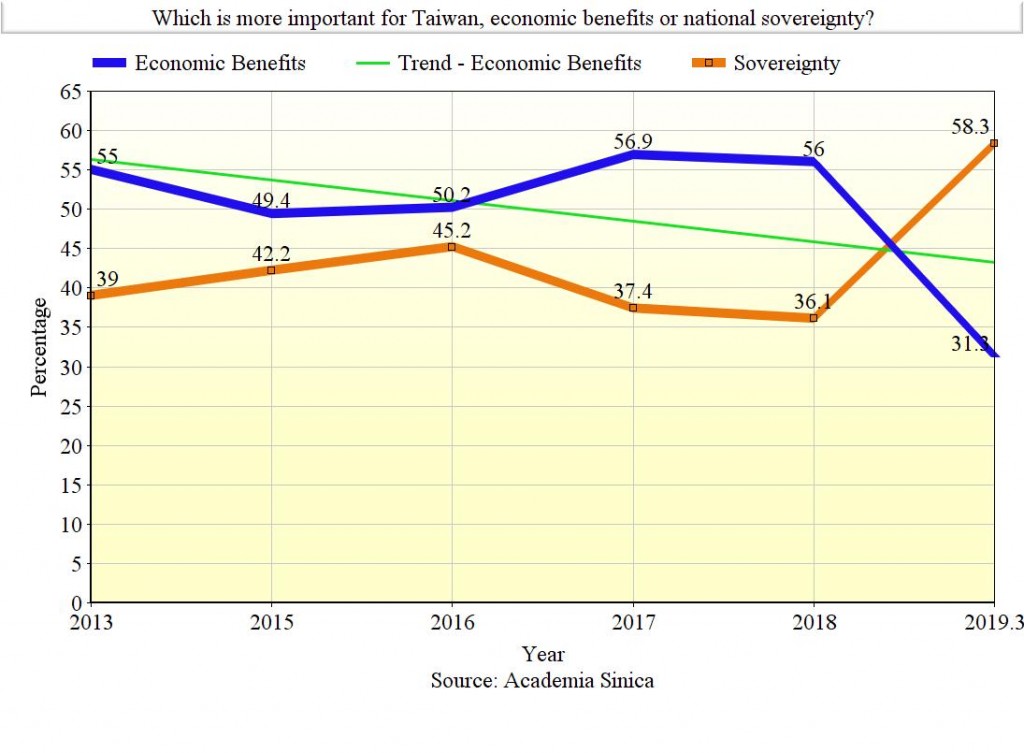 TAIPEI (Taiwan News) --- A poll released by Academia Sinica has found that Taiwanese now care much more about sovereignty than the economy, a major reversal from last year, as bullying from Beijing takes its toll.

Since 2013, Academia Sinica has been conducting a survey asking Taiwanese whether they most value Taiwan’s "sovereignty" or "economic benefits" in the context of relations with China. The most recent results from March this year show a dramatic drop in interest in economic benefits to 31.3 percent, and a significant spike in concern about Taiwan's sovereignty to 58.3 percent.

Academia Sinica Institute of Sociology deputy director Chen Chih-jou (陳志柔) said that Taiwan's sense of crisis over its sovereignty is stronger than before, even more so than after the Sunflower Movement, reported Liberty Times. He also said that Taiwanese are slowly losing their illusion about the economy.

According to the statistics of the research group, 55 percent of the respondents in 2013, during Kuomintang (KMT) President Ma Ying-jeou's (馬英九) rule, thought that the economic gains were more important, while 39% thought that the national interests were the priority. After 2015, the proportion of the two groups became closer and closer.

In 2015, the percentage of those who favored economic interests was 49.4 percent, while 42.2 percent prioritized national sovereignty. The gap narrowed to its smallest difference in 2016, when 50.2 percent opted for economic gains, while those who were more concerned about sovereignty climbed to a new high of 45.2 percent. Independence-leaning Democratic Progressive Party candidate Tsai Ing-wen (蔡英文) was elected president of Taiwan in January of that year. (Chart based on data from Academia Sinica)

In 2017 and 2018, the two groups greatly diverged again, with economic benefits receiving 56 percent each year, while concern about national sovereignty dropped down to 37.4 percent in 2017 and 36.1 percent in 2018.

However, in March this year, the latest survey showed a significant turning point. For the first time, the proportion of Taiwanese people who think economic interests are more important dropped to 31.3% in the survey year, and national sovereignty increased to 58.3%.

Chen said that since 2015, younger and lower socio-economic groups have tended to emphasize national sovereignty and opposed more open cross-strait economic relations, because they are the most vulnerable in the labor market, reported Liberty Times. Chen theorized that they may believe that cross-strait economic exchanges will bring them more severe economic competition in the jobs market and a higher cost of living, such as for housing.

Chen was cited by Liberty Times as saying that younger demographic groups are already at a disadvantage in terms of the structure for opportunities and social mobility and resource allocation. He said they have more doubts about the Sunflower Movement and it can be seen that the younger generation that grew up in the 1990s was not socialized or schooled in the traditional elements of the KMT.

Chen said that the youth have a stronger, more intense identification with Taiwan and even consider China as a threat, and feel a sense of rejection toward it.

Regarding changes after 2018 and the inflection point in 2019, when concern over sovereignty surpassed economic gain for the first time, Chen said that Xi's speech about using force to unify China with Taiwan and his constant pushing of the "one country, two systems framework" have made Taiwanese feel increased anxiety about China, according to the report. Chen said the crisis people feel over sovereignty is now even stronger than the Sunflower Movement in 2014, and Taiwanese people are slowly becoming disillusioned about the economy.

The results of the poll showing a definite shift towards sovereignty do not bode well for itinerant Kaohsiung Mayor and KMT presidential candidate Han Kuo-yu (韓國瑜) as his message of "make Taiwan rich" will fall on deaf ears among many of Taiwan's youth. While the results would seem to favor incumbent DPP President Tsai as the increasing threat felt from China could cause many Taiwanese to circle the wagons and reject a candidate who would seem to be willing to sacrifice sovereignty for increased investment from Communist China, such as Han or Foxconn tycoon Terry Gou (郭台銘).

The violence and unrest in recent days in Hong Kong, only serves to confirm the suspicions of Taiwanese about the viability of the tattered "one country, two systems" framework if imposed on Taiwan.