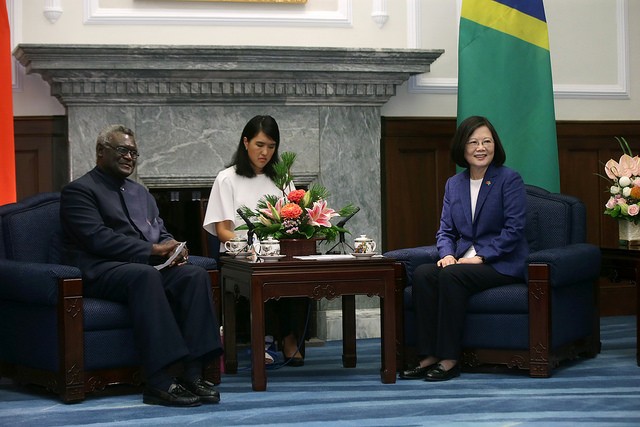 TAIPEI (Taiwan News) — The Solomon Islands government has established a task force to review the country’s diplomatic relations with Taiwan and is planning to send officials to China, reports said.

The relationship between Taiwan and the Solomon Islands continues to “improve steadily,” Taiwan’s Ministry of Foreign Affairs (MOFA) said via a statement on Tuesday morning. However, MOFA also confirmed the Pacific island state is planning to send officials to China.

A MOFA spokesperson claimed the purpose of the ministerial delegation is to study the Chinese timber market. The Solomon Islands’ economy is highly dependent on timber exports, and China is the country’s major trading partner in timber.

The Pacific archipelago has formed a bi-partisan foreign policy task force to examine its diplomatic ties with Taiwan. The group will also weigh up the prospect of switching recognition to China, Radio New Zealand reported on Monday.

The task force will provide a detailed analysis for the government to mull strategies that will “enhance diplomatic engagements and leverage opportunities for the country,” said Manasseh Sogavare, the island group’s prime minister.

The government will make “a sovereign decision” in the best interests of the country and its people, added Sogavare. Ousted in 2017, Sogavare returned to power after a general election in April.

According to MOFA, the task force is part of the new government’s initiative to conduct research and gather data to support its foreign policy. In the Solomon Islands, parliament members and government officials supporting Taiwan remain in the majority, MOFA added.

Rumors that the Solomon Islands would sever diplomatic relations with Taiwan in favor of China, which poached three allies from Taiwan in 2018, have been widespread in recent months.

Earlier reports indicated that Sogavare has been under pressure from pro-Beijing lawmakers and officials at home, urging him to recognize China, which has been expanding its influence in the Pacific over the past few years.