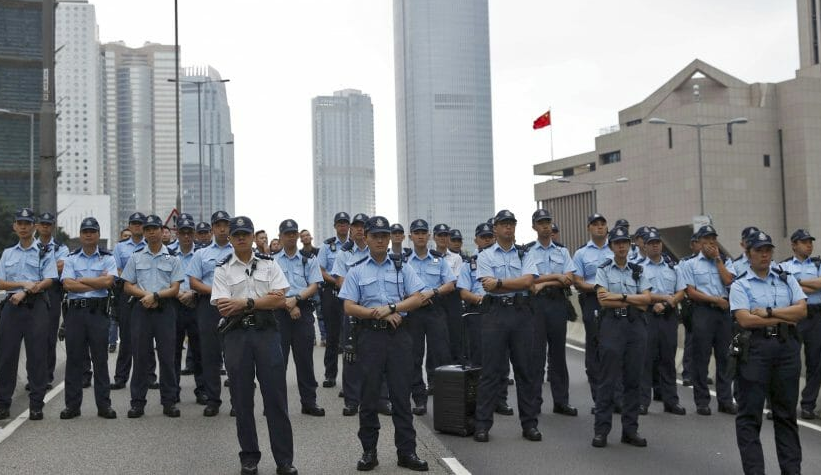 TAIPEI (Taiwan News) – From Hong Kong’s handover from the British to China in 1997 to the end of Tung Chee-hwa’s (董建華) term as chief executive in 2005, Hong Kong maintained a semblance of its democratic system via established checks and balances on government power.

However, under the leadership of Chief Executive Carrie Lam (林鄭月娥) starting in 2017, the government of the special autonomous region (SAR) has taken a quick authoritarian turn under increasing influence from Beijing.

In the past, new legislation introduced in Hong Kong was expected to be approved by the Hong Kong Bar Association before it could pass in the City Legislative Council (LegCo).

Theoretically, this practice should have been maintained under China’s “one country, two systems” framework. However, only 22 years after the 50-year transition period that was stipulated by the Sino-British treaty on Hong Kong, it is obvious that the Chinese Communist Party (CCP) has no intention to honor the provisions of the agreement.

Now, only Beijing-approved candidates are appointed to the SAR's office of chief executive, which functions as the leader of a “rubber stamp legislature” that is expected to simply pass legislation introduced and approved by pro-Beijing lawmakers. In this manner, China’s sole democratic outpost of Hong Kong has transformed very rapidly into an increasingly undemocratic puppet state directed by the government in Beijing.

The CCP primarily exerts its direct influence over the city’s government via the Liaison Office of the Central People's Government in the Hong Kong Special Administrative Region.

China has also established the Office of the Commissioner of the Ministry of Foreign Affairs in the city, as well as a garrison of the People’s Liberation Army. The former conducts international affairs on behalf of the SAR, while the latter is charged with the defense of Hong Kong.

In 2014, the Chinese government committed funds and labor in Hong Kong to the “Enhanced East Lantau Reclamation Project” (東大嶼山填海計畫), a large infrastructure project, that would expand the SAR’s territory by approximately one-fiftieth of its size.

Hong Kong’s central authority is reportedly unaware of the full extent of the construction projects entailed in the East Lantau project, yet the LegCo was coerced into approving the project anyways.

This is just one example of Beijing’s top-down totalitarian style of governance imposed on the people of Hong Kong. Obviously, from Beijing’s perspective, “One Country” is all that remains of the “One Country, Two Systems” framework. As a further means of eroding the “One Country, Two systems” pledge, recently the LegCo attempted to push through a new law that would simplify the extradition of suspects from Hong Kong, who are wanted for criminal offenses in Communist China.

However, public opposition to the proposed extradition bill in Hong Kong has been immense, with millions of Hong Kong’s 7.3 million people taking to the street to fight the measure.

One reason that the CCP wants to pass the measure on extradition is because of China’s own financial difficulties, and the widespread fear of an impending financial crisis. Beijing is very worried that a large number of corrupt officials may be preparing to flee to Hong Kong, and Hong Kong’s semi-autonomous judiciary may make it difficult for Beijing to prosecute such individuals, once they escape to Hong Kong, then possibly further abroad.

Of course, China also wants to restrict freedoms in Hong Kong, because it is worried Western powers will use seek to use Hong Kong’s more open civil society to undermine the authority of the CCP. After the huge protests over the past two weekends (June 9 – June 16), Carrie Lam finally announced they would suspend vote on the new extradition law indefinitely.

What is ridiculous however, is that Carrie Lam and officials in Hong Kong have attempted to place the blame for the suspension of the vote, not on the massive public opposition in Hong Kong, but rather on the government of Taiwan.

Pro-Beijing media outlets have framed the issue as though Taiwan is responsible for the impasse, because Taiwan will not cooperate with an extradition of a Hong Kong murder suspect, wanted in Taiwan for murdering his girlfriend in 2018.

Looking at the situation in Hong Kong, it is easy to recognize the “One Country, Two Systems” framework as a charade, which is more akin to the metaphor of “boiling frogs.” Beijing intends to increase its authority over the SAR in slow steps, taking larger and larger strides until there is only “one system” and “one country.”

However, in the metaphor, when the heat is turned up too high, too soon, the frog will notice and jump out. This is what we have witnessed with the undeniable public opposition to the extradition law in Hong Kong. The people have once again become aware of the dangerous situation in which they find themselves.

The CCP is also carrying out a “boiling frogs” routine within China as well, in the form of a comprehensive surveillance system that is designed to monitor the activities of normal citizens 24 hours a day, every day of their lives. The CCP pursues the implementation of this system through financial incentives, and propaganda designed to make this life of surveillance seem attractive and gratifying.

Meanwhile, the Chinese government works to expunge the internet of any information which challenges the legitimacy of the CCP, like online information related to the Tainanmen Square Massacre in 1989, or even accurate reporting on the current public protests in Hong Kong over the extradition bill.

As the CCP slowly reduces the available information, ensuring a misinformed and under informed populace, they increase their surveillance of society via facial, vocal and gait recognition technologies, along with the country-wide “social credit” program to ensure a docile citizenry.

Like a loose rope that gets tighter and tighter or a frog in boiling water that gets warmer and warmer until it is too late to escape. This is how the CCP operates to ensure its control.

As in Hong Kong, as well as China, the CCP also has operatives pursuing a “boiled frog” strategy here in Taiwan as well. Namely, people can see the tactics of many in the Kuomintang (KMT) pan-blue camp who engage regularly with CCP officials behind closed doors in various cross-strait forums.

Many KMT officials lobby for easing restrictions on Chinese citizens applying for residency, claiming to promote healthy homes and families with more relatives from China as necessary for the care of children and the elderly.

KMT officials also pursue special trade and agricultural agreements on behalf of China, in order to slowly improve Taiwanese people’s perceptions about the character of the CCP and the government of China.

Following these steps, China believes Taiwanese people can be brainwashed into slowly giving up their free civil society and democratic government. When one recognizes how the pro-China politicians in Taiwan are relentlessly promoted by Taiwan’s “red media,” media outlets under the direction and influence of Beijing, then it is easy to see the CCP’s “boiling frog” strategy at work in Taiwan.

Just as in Hong Kong, China believes it can slowly undermine the democratic institutions and values of Taiwan, and eventually bend the government in Taiwan to the will of the CCP. The “boiling frog” strategy is already in motion to turn Taiwan into another authoritarian puppet state under “One Country,” just like the Hong Kong SAR.