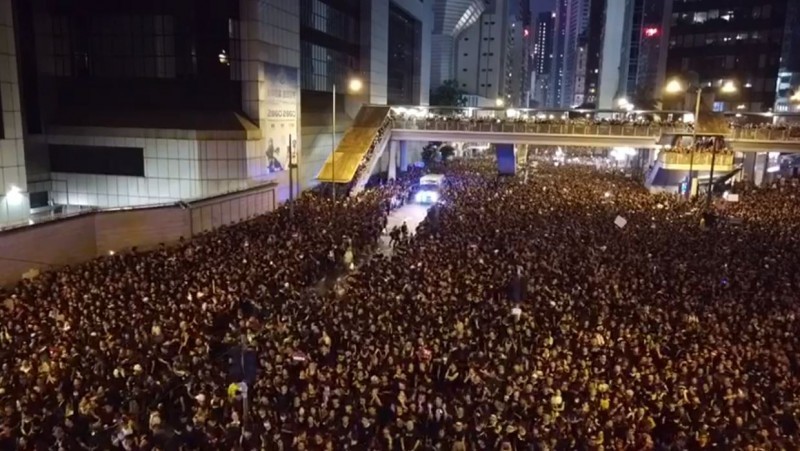 TAIPEI (Taiwan News) -- After Hong Kong actor Anthony Wong (黃秋生) shared a video of a massive crowd of two million Hong Kong protestors "parting the Red Sea" for an ambulance, netizens were impressed with the civilized behavior of the demonstrators.

As an estimated two million Hong Kong citizens took to the streets of the city to protest a proposed bill that would allow for the extradition of suspects in Hong Kong to Communist China on Sunday (June 16), a video surfaced of a massive crowd smoothly making way for an ambulance like "Moses." Wong was so moved by the scene that he shared the video on his Facebook page and wrote in Cantonese "Now the whole world knows where Hong Kong is."

In the video, a teaming throng of protestors can be seen covering every inch of space outside Wan Chai Police Station, when an ambulance with sirens wailing and lights flashing suddenly appears. In response, the crowd instantly opens up a perfectly straight lane for the vehicle to safely travel through, before quickly closing up the seam after it passes by.

Many netizens praised the behavior of the crowd:

"This is the quality of the Hong Kong people!"

"In ancient times Moses parted the Red Sea, today an ambulance parted a sea of people."

"Proud to be a Hong Kong person."

"Never tire of watching this, this is truly wondrous."

"The spirit of Hong Kong."

Video of ambulance shared by Wong: