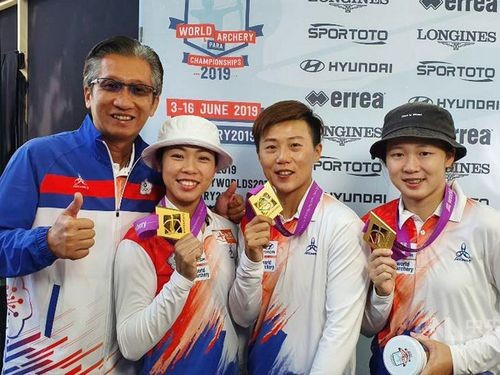 The previous best showing by a women's team in the recurve event was a silver medal at the 2007 World Championships. They also won silver at the 2004 Olympics in Athens.

"I had faith in them," said team coach Ni Ta-chih (倪大智), "I never doubted that we could win gold at the World Championship."

"We worked very hard for a long time for this match and it was hard. We had to concentrate and exchange information especially on the wind as it was tricky," one of three archers on Taiwan's team, Lei Chien-ying (雷千瑩), was quoted as saying on the World Archery website.

"We did the best we could, and we are now very happy."

The trio went one better in these world championships in the Netherlands, giving them a confidence boost ahead of the 2020 Olympics in Tokyo.

Taiwan took three of four six-arrow sets to beat the strong Koreans, who were not their usual precise selves. The score by set, with the maximum per arrow a 10, was 56-53, 56-52, 55-58 and 55-54.
The winner of each set gets two points, and each team gets one point for a tie. The team that gets to five points first wins.
Peng clinched the match with a perfect 10 on the last arrow of the final set, needing a nine to win gold.
"I wasn't thinking of the score. I was just focusing on my shot after receiving tips from my teammates on where should I aim," Peng told CNA.
Tan had won four medals at previous world championships but never gold, and she credited her teammates for getting her over the hump.

"My teammates gave me a lot of strength. I'm not in my best form right now and I've felt a lot of pressure, but they kept encouraging me. I thing it's great to be able to compete in this kind of atmosphere," Tan said.

The team's veteran said her eyes were clouded as Taiwan's Olympic flag was raised at the medal ceremony, "but I'll reserve the tears to the Olympics," she joked.

She did not joke, however, about the significance of defeating the Koreans, who had been unbeaten in 2019 and had won the recurve women's title in 13 of the previous 20 world championships.

Calling the defeat of the "Koreans a longtime goal," she said the win "proved we could do it and we wouldn't mind it happening again at the Olympics."