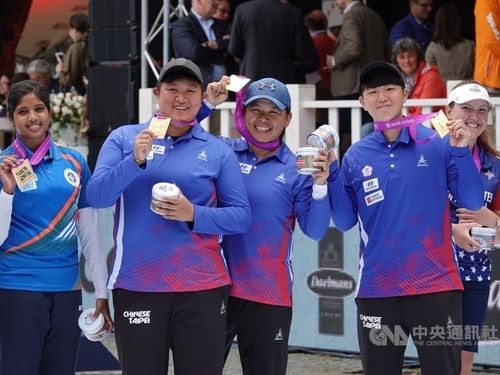 Taiwan's archery team clinched the World Championship gold medal in the women's team compound archery event for the first time in 20 years in the Netherlands on Saturday.

Seeded ninth after qualifying at the 2019 Hyundai Archery World Championships in Hertogenbosch, the Taiwanese team of Chen Li-ju (陳麗如), Huang I-jou (黃逸柔) and Chen Yi-hsuan (陳怡瑄) managed to come from behind to top the United States 229-224 in the final.

"The victory means a lot to us. It was the team's first gold in 20 years and also showed that our hard work did not go to waste," Chen Yi-hsuan said.

Though she expressed her satisfaction over the team's bronze medal at the Asian Games last year, she said the World Championships was a completely different ballgame because it "brings together the world's best" archers rather than just those from Asia.

Huang called the gold medal a confidence booster, and said it demonstrated that members of the team are continually improving their skills.

Huang said she hoped the victory in the Netherlands could raise awareness of compound archery in Taiwan.

Because the recurve bow rather than the compound bow is used in Olympic archery events, compound archery failed to take off in Taiwan after it bagged its first gold medal at the World Championships in France in 1999, said compound team head coach Chen Szu-yuan (陳詩園).

Chen Szu-yuan was part of the Taiwanese men's team that won bronze at the 2004 Olympics in Athens using a recurve bow.