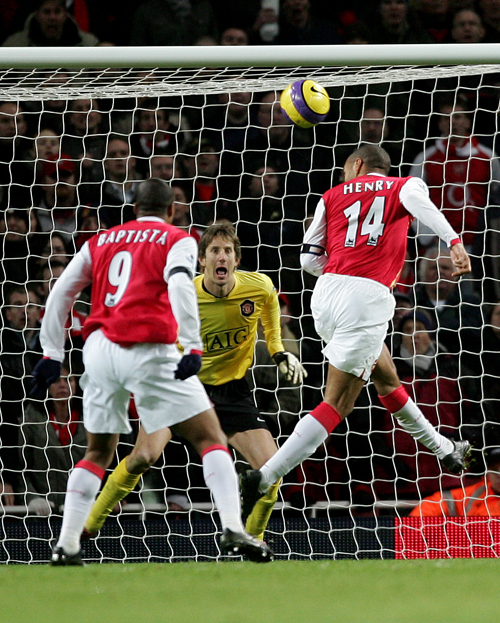 Sir Alex Ferguson has insisted that the pain of his side's defeat by Arsenal will bolster its determination to hold off Chelsea in the Premiership title run-in.
Ferguson watched in disbelief at the Emirates Stadium on Sunday as late goals from Robin van Persie and Thierry Henry gave the Gunners a 2-1 win after Wayne Rooney had put United on track for a win that would have sent it nine points clear of Chelsea.
But the United boss was philosophical about his side's failure to extract any advantage from Chelsea's 2-0 defeat at Liverpool on Saturday.
"There is a big disappointment in a sense," Ferguson acknowledged. "But we have seven important away games to come and that will be good for us, no question about that.
No repeating the mistake
"If we get in that winning position again, we won't be making that mistake, I can tell you that."
United appeared in control of the contest after Rooney, who had failed to score in his previous seven matches, headed in a Patrice Evra cross eight minutes into the second half.
But van Persie slid in behind Gary Neville to connect with Cesc Fabregas's cross for the equalizer with seven minutes left, setting the stage for Henry to claim his last-minute winner with a bullet header from Emmanuel Eboue's delivery.
Ferguson will have to look at how United leaked two goals from crosses from the right of the area but he insisted he had not seen anything to worry about in his side's overall display.
"These games are always difficult," he added. "You can't say you are going to dominate a game for 90 minutes. Arsenal had moments in the game when they had control of possession, particularly in the second half and maybe we sat back a little bit, whereas in the first half we controlled it."
Arsenal boss Arsene Wenger claimed United had blown the chance to effectively wrap up the title, although he also acknowledged that he did not expect Ferguson's squad to "crumble" in the aftermath of this setback.
"With ten minutes to go Man Utd was certainly maybe champions, but at the end of a game you cannot say that," the Frenchman said. "This will open it up for everybody. For us and Liverpool a little bit less but you never know."
Henry's winner was the most dramatic moment yet to be witnessed at the Emirates Stadium, where Arsenal remains unbeaten five months into its residency at their state-of-the-art new home.
A neat one-two with Thomas Rosicky sent Eboue to the touchline and the Ivorian fullback delivered perfectly for Henry to power the winner past Edwin van der Sar's outstretched right hand.
United had enjoyed the better of the first half with Arsenal goalkeeper Jens Lehmann producing fine saves to keep out a long-range effort from Rooney and a header from Henrik Larsson.
Shortly before those chances at the end of the first half, Henry had headed Arsenal's best chance straight at van der Sar. Fortunately for the home side, he did not repeat that mistake when presented with his chance to seal the points.
In other Premier League action: Wigan 0, Everton 2.