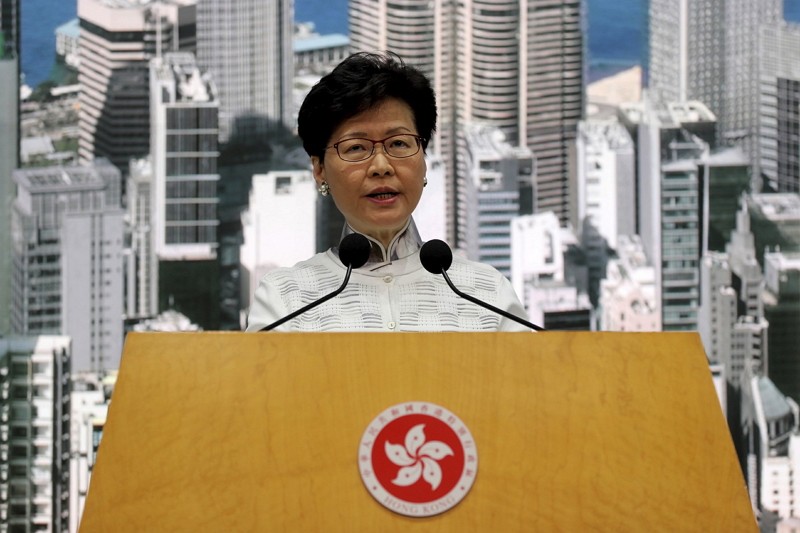 Lam told reporters she took the move in response to widespread public unhappiness over the measure, which would enable authorities to send some suspects to stand trial in courts in mainland China.

Many in the former British colony worry it will further erode cherished legal protections and freedoms. Lam said the government would study the matter further, for the “greatest interest of Hong Kong.”

“After repeated internal deliberations over the last two days, I now announce that the government has decided to suspend the legislative amendment exercise,” Lam said.

“I want to stress that the government is adopting an open mind,” she said. “We have no intention to set a deadline for this work.”

Lam said she would “adopt a sincere and humble attitude in accepting criticism” over the government’s handling of the issue.

Lam made the announcement as another mass protest was expected on Sunday, after clashes that turned violent on Wednesday, leaving about 80 people injured including 22 police officers.

The standoff between police and protesters in the former British colony is Hong Kong’s most severe political crisis since the Communist Party-ruled mainland took control in 1997 with a promise not to interfere with the city’s civil liberties and courts.

Lam, chosen by Beijing to be the highest-level local official, is caught between her Communist Party bosses and a public anxious to protect the liberties they enjoy as a former British colony.

She had previously refused to withdraw the bill, and many protesters are demanding she quit.

Protests died down late in the week, but around midnight Friday there were still dozens of youths singing and standing vigil near the city’s government headquarters, where demonstrators had tussled with police who deployed tear gas, pepper spray, hoses and steel batons as thousands pushed through barricades.

Police said 11 were arrested. Lam declared that Wednesday’s violence was “rioting,” potentially raising severe legal penalties for those arrested for taking part. In past cases of unrest, authorities have waited months or years before rounding up protest leaders. In April, nine leaders of a 2014 pro-democracy protest movement known as the “Umbrella Revolution” were convicted on public nuisance and other charges.

Prior to Saturday’s announcement by Lam, some members of the Executive Council, Hong Kong’s cabinet, said she should perhaps rethink plans to rush the bills’ passage. A group of former senior government officials issued a public letter urging her not to force a confrontation by pushing ahead with the unpopular bills.

Many in Hong Kong fear the measures would undermine the former British colony’s legal autonomy.

Adding to tensions, the extradition bill has drawn criticism from U.S. and British lawmakers and human rights groups, prompting Beijing to lash back with warnings against “interference” in its internal affairs.

Anson Chan, a former chief secretary for Hong Kong, said Friday that Lam still could keep her post if she backs down.

“What the people are attempting to tell is that we are very worried about the consequences of passing the extradition bill, because no one will feel safe, even in their own beds, after passage of this bill,” Chan said in an interview.