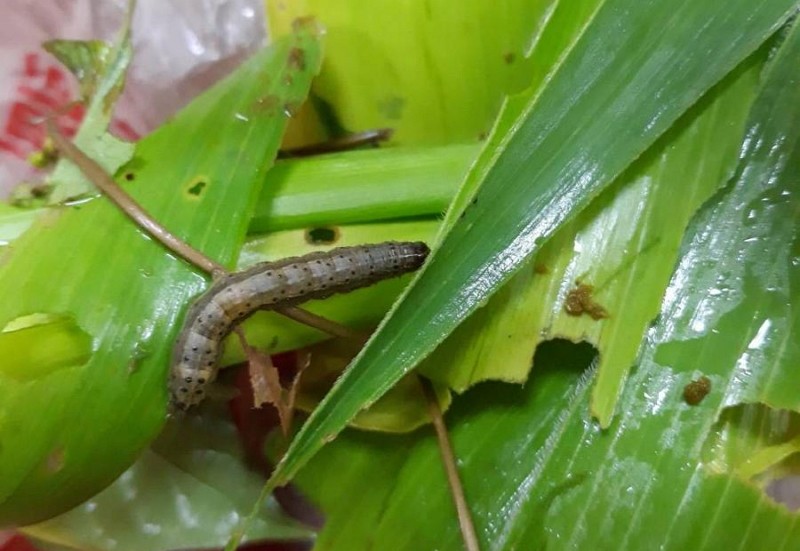 An invasive caterpillar species -- the fall armyworm -- has spread to almost every city and county across Taiwan, including several outlying islands.

Since the first report of the crop-destructing insect's presence in the country emerged on Saturday, there have been reports of 39 locations where the fall armyworm, the larva of the podoptera frugiperda moth, was found, according to the latest data on the pest compiled by the Council of Agriculture (COA).

Except for Kaohsiung, Pingtung and Nantou, the 16 other cities and counties on Taiwan proper have been invaded, COA deputy chief Chen Junne-jih (陳駿季) said Friday, and the caterpillar has also been found on the Kinmen, Matsu and Penghu islands.

The alien species might have been brought to Taiwan by recent air currents from southwest of Taiwan, Chen said, and so far all of the insects captured in the country were larvae, except for four adult moths in Matsu.

Regardless of whether they are larvae or moths, the fall armyworms in Taiwan are all first generation and have yet to breed locally, Chen said, emphasizing the urgency in destroying the intruder within the next week before the larvae mature.

Fall armyworms get their name from the way they advance with military precision to destroy the leaves and stems of plants.

If the insect successfully establishes a presence in Taiwan, sweet corn and rice fields on Taiwan proper and sorghum and wheat fields in Kinmen are particularly vulnerable, with potential annual losses of up to NT$3.5 billion (US$111.46 million), according to the COA.

Measures have been stepped up to wipe the invading caterpillars out, particularly on organic farms, the council said.