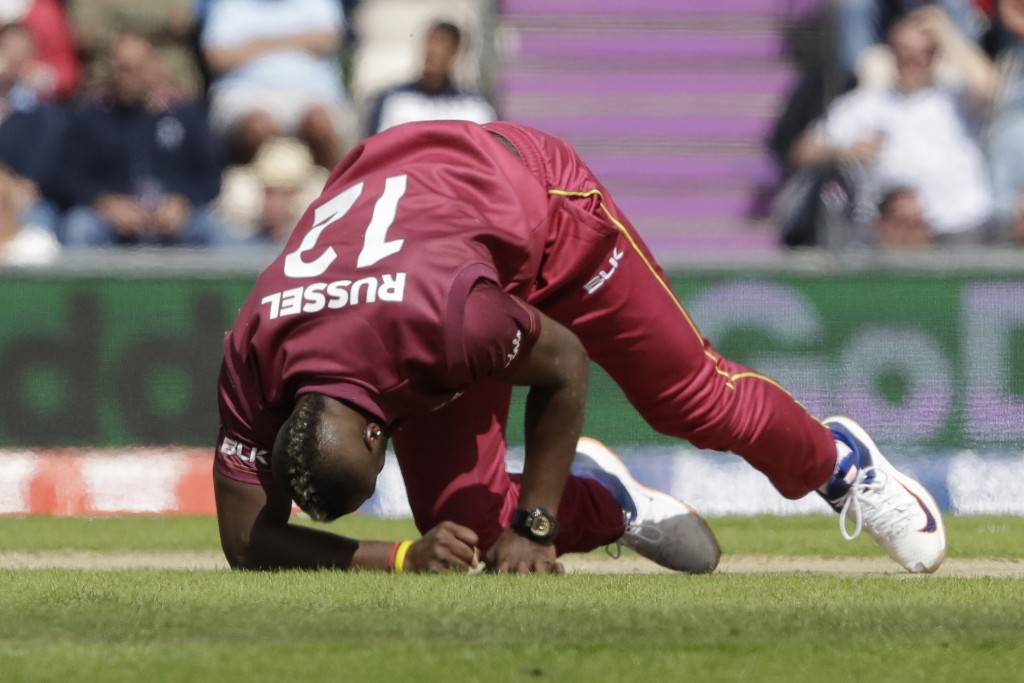 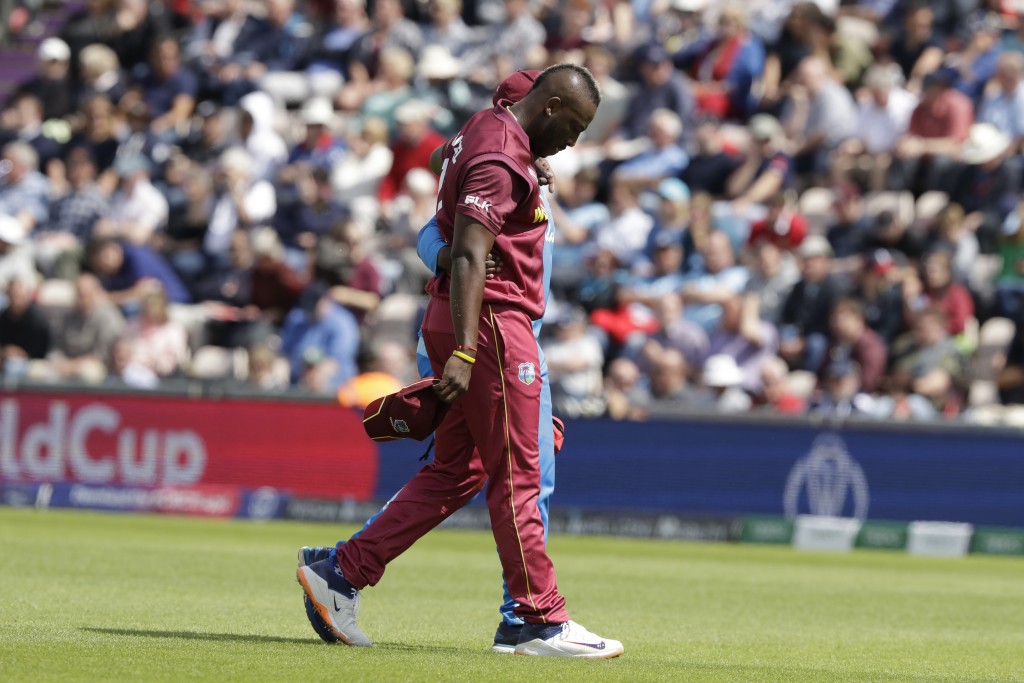 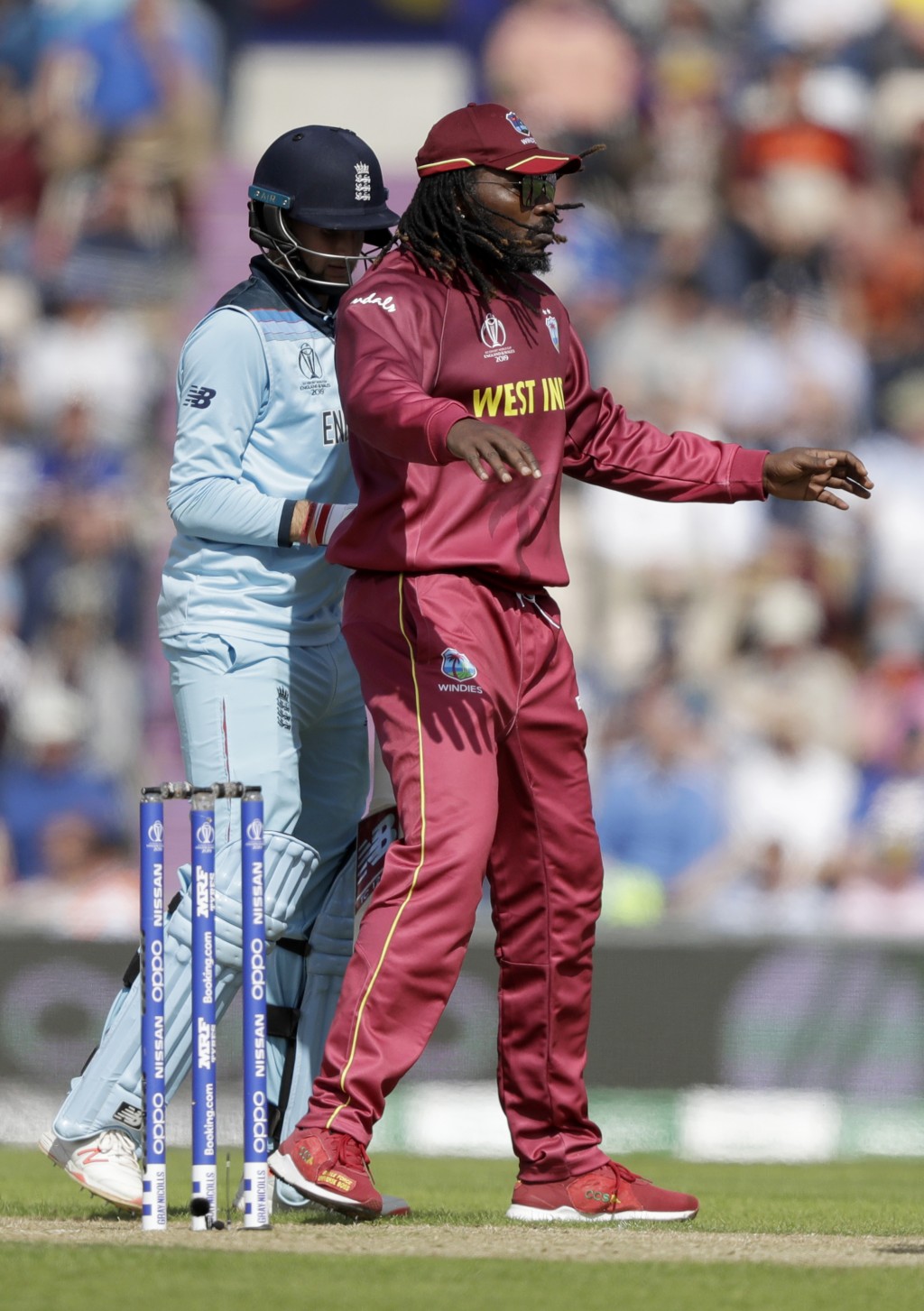 SOUTHAMPTON, England (AP) — A heavy loss to England and a washout against winless South Africa have been compounded for the West Indies by Andre Russell's creaky knees.

The West Indies all-rounder could only bowl two overs in the World Cup game against England on Friday and had to leave the field before the home team chased down a victory target of 213 with almost 17 overs to spare.

The West Indies pace battery that bounced out Pakistan for 105 in an opening win and had defending champion Australia reeling at 38-4 and 79-5 in the second game took a battering from injury-hit England, with Joe Root scoring 100 from 94 balls.

West Indies skipper Jason Holder said it has been a difficult week for the explosive all-rounder Russell.

"We have been trying our best to keep him on the park, but it is proving difficult," Holder said. "Yeah, going forward, we have to persist. He is here for a reason."

Russell dropped to the ground at the end of the 11th over, his second, after directing a short-pitch ball at England opener Jonny Bairstow. He left the field and didn't bowl another over.

"We think he can be a match-winner for us," Holder said. "We have just got to cope with him. Got to do everything we possibly can with him to keep him on the park."

West Indies split a series 2-2 in the Caribbean against England earlier in the year to raise expectations and rose in semifinal calculations with the big win over Pakistan and the close loss to five-time champion Australia. Sheldon Cottrell took two early wickets to have South Africa 29-2 when play was washed out here last Monday.

The rain continued all week, limited the time for practice, and the weather conditions certainly favored the home team after England captain Eoin Morgan won the toss and sent West Indies into bat on cold, overcast conditions.

Chris Gayle scored a whirlwind 36, fourth-wicket pair Nicholas Pooran (63) and Shimron Hemyer (39) shared an 89-run stand and Russell scored a rapid 21, including a pair of sixes in an over from Adil Rashid after he was dropped in the outfield. But otherwise, the West Indies batsmen struggled, the last four wickets fell for 10 runs, as the England bowlers exploited ideal conditions for seam bowling.

Holder said West Indies did well in the opening 10-over powerplay at 41-1, considering the conditions, but "we lost the game in the middle."

"Every time we got something going, we lost a wicket. We lost wickets at crucial stages," he said. "I thought Pooran played extremely well and he is an example of how we need to play on that pitch."

The sun emerged in time for England's innings, drying the outfield, flattening out the wicket and giving Root a perfect deck to showcase his batting. Recalled paceman Shannon Gabriel took the only two wickets for the West Indies, and appeared to pick up a leg strain in his last over.

"We needed to make early inroads," Holder said. "The way we have been bowling, we have been backing ourselves to get new-ball wickets. It didn't happen for us today, well played England."

With one win, two losses and one point from the washout, West Indies is already in the position of having to win against Bangladesh in Taunton on Monday. Following that, there are back-to-back matches against the unbeaten New Zealand and India.

Holder is confident a pace contingent containing Cottrell, Oshane Thomas, Carlos Brathwaite and Shannon Gabriel can bounce back, and the batsmen will start finding some consistency to help West Indies into the top four and a spot in the semifinals.

"It would be very foolish not to be confident," he said. "We have only played four games. A hell of a lot of cricket left to be played.