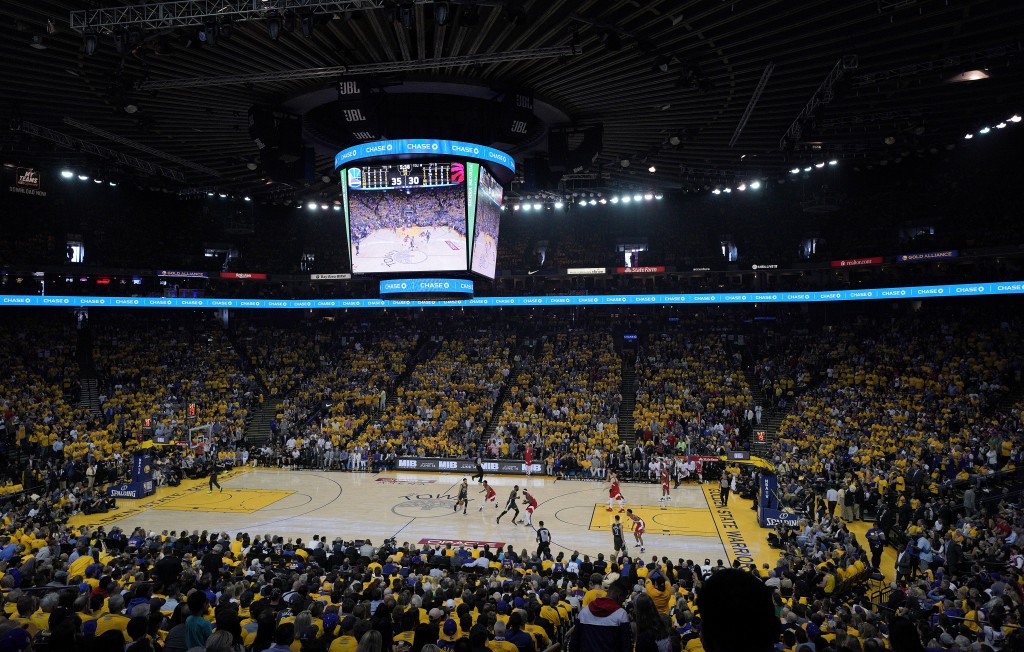 OAKLAND, Calif. (AP) — The Latest from Thursday night's Game 6 of the NBA Finals (all times local):

The 6-foot-9 Looney re-aggravated a cartilage fracture in his right collarbone area during Game 5.

Kerr says, "Kevon just warmed up on the court with Chris DeMarco. He's doing decently I think he'll give it a go. We'll see how he holds up."

The Warriors are honoring injured star Kevin Durant and paying tribute to Oracle Arena with yellow rally towels given to fans for Game 6 of the NBA Finals.

One line on the towel reads FOR OAK and the next line says LAND (FOR OAKLAND) with the "K'' and "D'' lined up in white for Durant's initials and nickname, "KD."

In the 2,070th game at Oracle, the Warriors were set to sell out their 343rd consecutive game and say farewell at last to the place they called home for 47 years. Golden State will move its games, practices and day-to-day operations to new Chase Center in San Francisco beginning next season.

The Toronto Raptors have a second chance at claiming their first NBA championship.

Game 6 of the NBA Finals will be played Thursday night, the Raptors entering with a 3-2 series lead over the two-time defending champion Golden State Warriors.

Golden State is 0-3 at home against Toronto this season, losing all three games by double digits. And this will be the final time that the Warriors play a home game at Oracle Arena, with the team moving to the Chase Center in San Francisco next season.

Golden State fought off elimination with a 106-105 win in Game 5 at Toronto on Monday night.