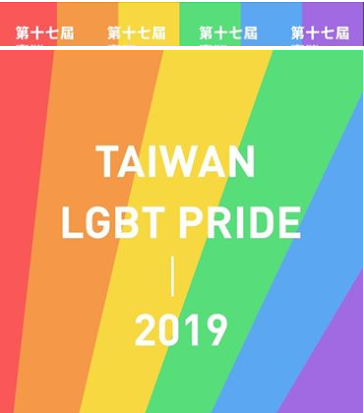 TAIPEI (Taiwan News) – The first Gay Pride parade since Taiwan became the first country in Asia to legalize same-sex marriage last month will take place on October 26, with all of October declared as Gay Pride Month.

After years of deliberations, protests and referendums, the Legislative Yuan gave the green light on May 17 for the first same-sex marriages in the country to be registered beginning May 24.

To mark what they call the “Year One” of gay weddings, organizers hope to see 200,000 people march in Taipei’s 17th annual gay pride parade, the largest in Asia, now scheduled for October 26.

The theme of the event will be “Together, Make Taiwan Better,” while October is to be the first-ever Gay Pride Month for the island country, featuring seminars and film festivals.

In most of the world, June has been designated Gay Pride Month, this year marking the 50th anniversary of riots by gay activists against a police raid on the Stonewall Inn in New York City. In Taiwan, several brand-name fashion boutiques have put rainbow-colored designs in their shop windows.

The organizers of Taiwan’s events say LGBT people should come out into the open and discuss issues with other citizens, showing they are “good neighbors,” the United Daily News reported.

An official website with more details about the events and about the routes of the October 26 is expected to be up and running in July.