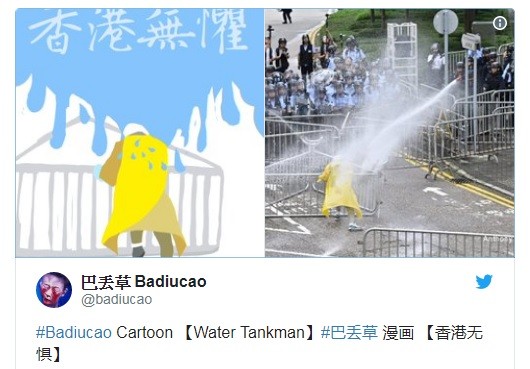 TAIPEI (Taiwan News) -- To express solidarity with protestors in Hong Kong rallying against a proposed law that would allow for the extradition of prisoners to China, Chinese dissident artist Badiucao posted an illustration of a protester who was doused with pepper spray and blasted by water hoses.

At 10:10 a.m. this morning (June 12), Hong Kong Free Press tweeted a photo of a lone protestor donning a yellow raincoat, and then single-handedly and defiantly standing against a phalanx of pepper spray and high-pressure hoses. The photo was taken as tens of thousands of Hong Kong citizens rallied in front of the territory's government headquarters to stymie what was expected to be a rubber-stamping of the controversial law.

Inspired by the protestor, Badiucao by 12:45 p.m. had already created an illustration to immortalize the scene and to use it as a symbol of the new protest movement. Hearkening to the legendary act of defiance against overwhelming odds by Tank Man in Tiananmen Square 30 years ago, Badiucao dubbed the work "Water Tankman."

In the illustration, a man dressed in yellow leans forward despite a torrent of water. In English, the work is titled "The City of Courage Hong Kong," while in Chinese characters, it reads "Hong Kong Without Fear." Badiucao created caustic political cartoons for many years in anonymity, but on the 30th anniversary of the Tiananmen Square Massacre on June 4, he revealed his true identity to the public. The following are other new artworks by Badiucao: 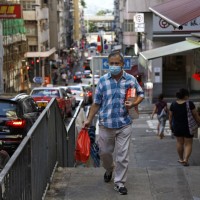 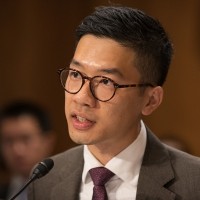