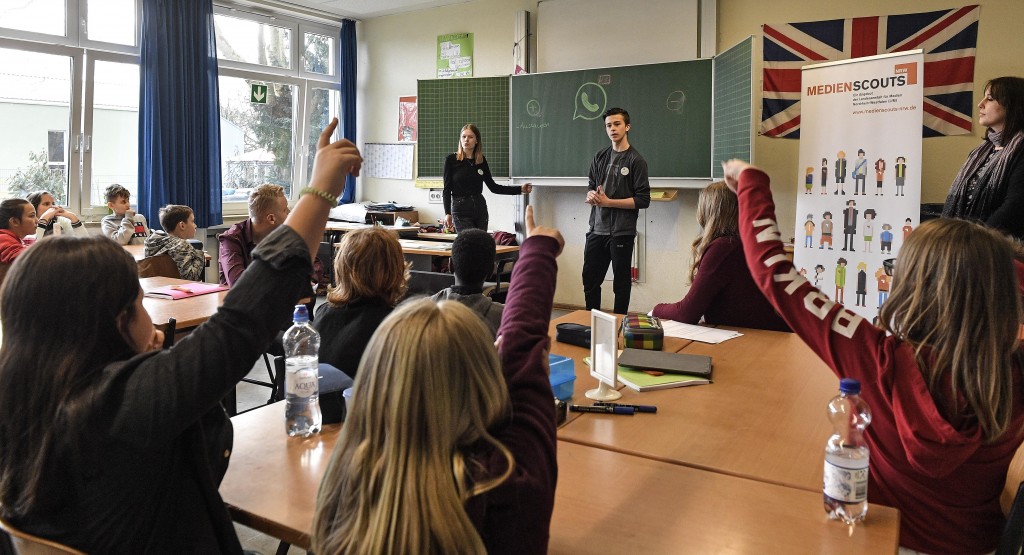 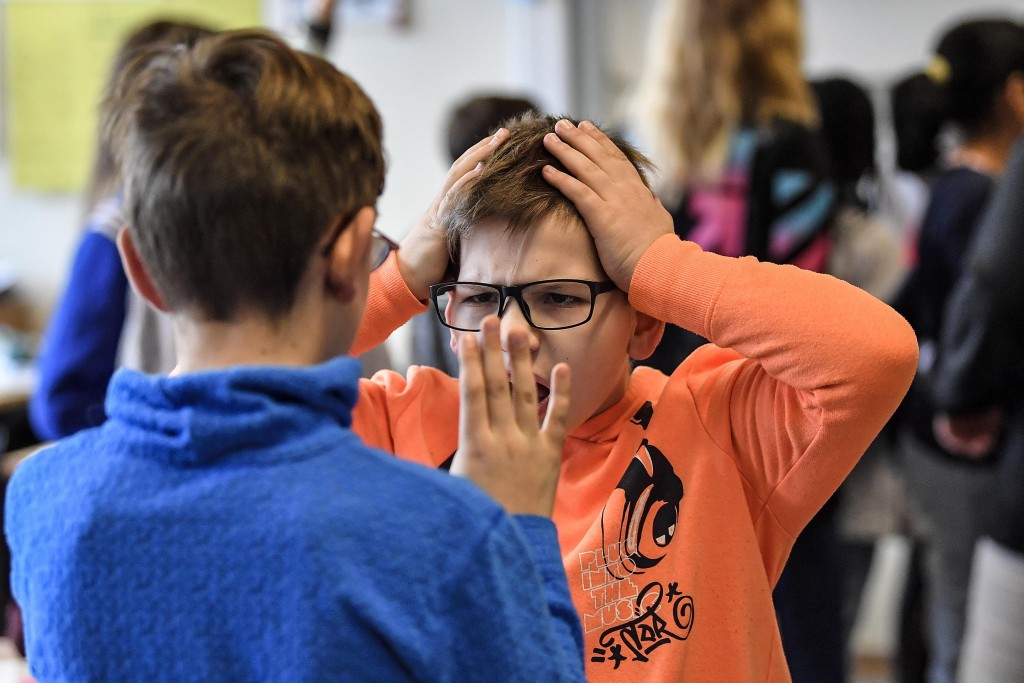 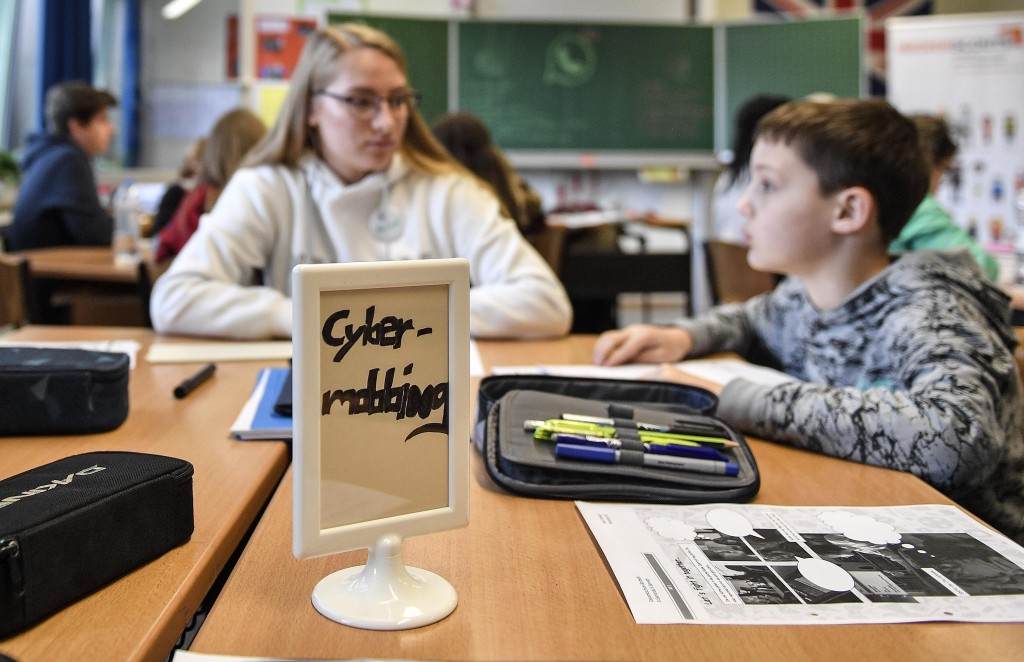 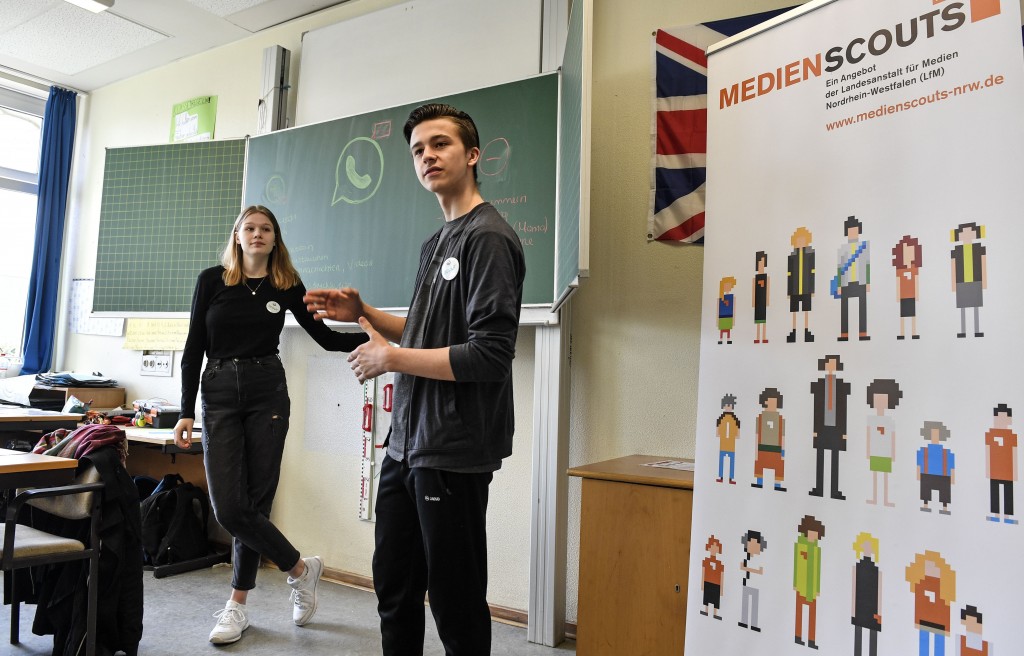 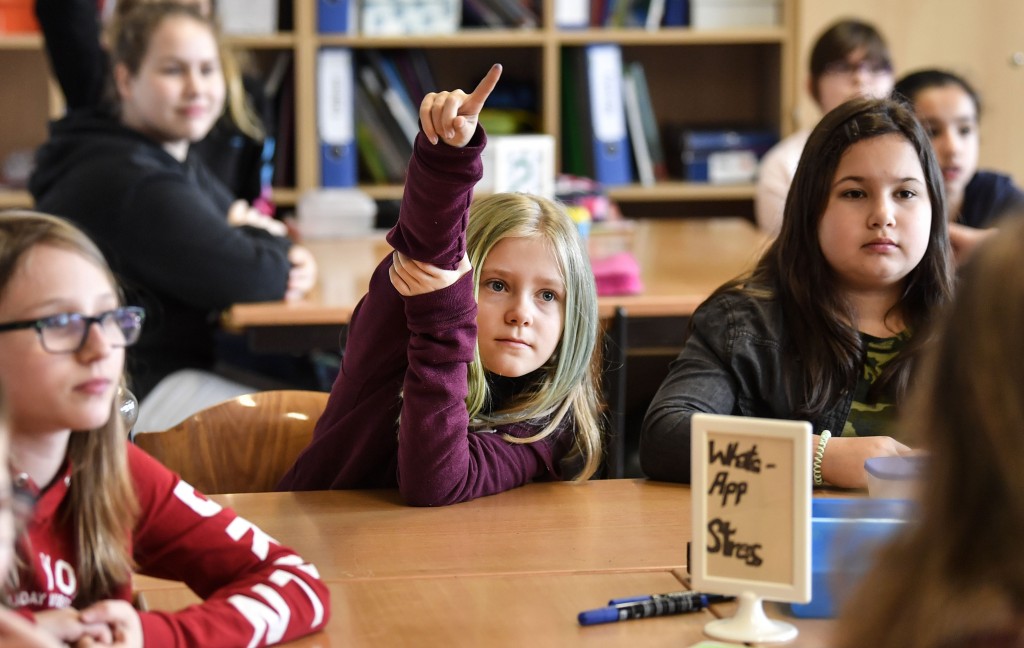 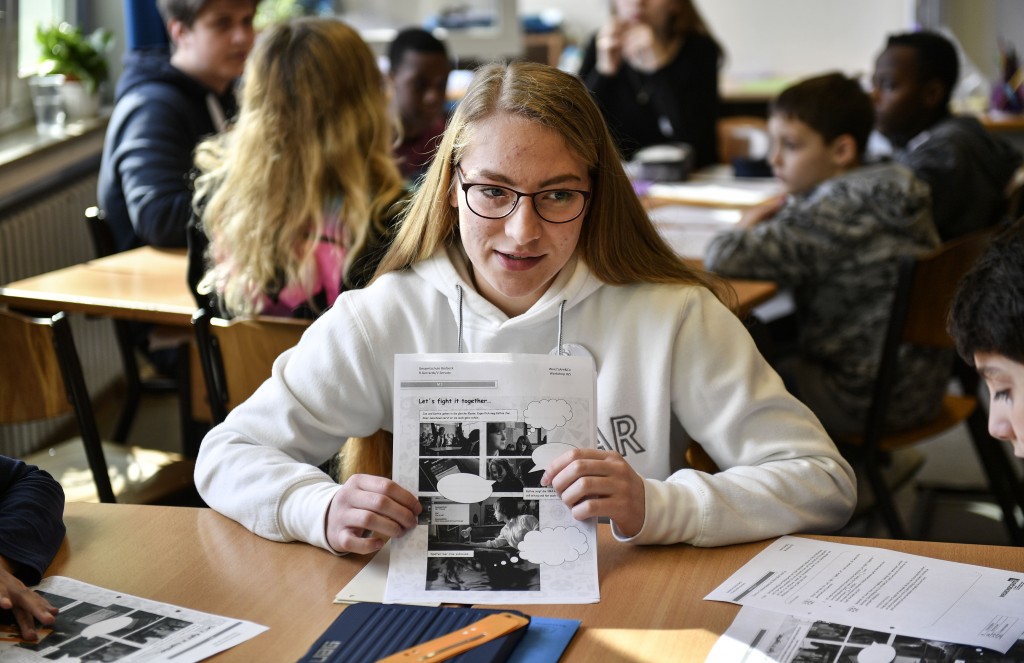 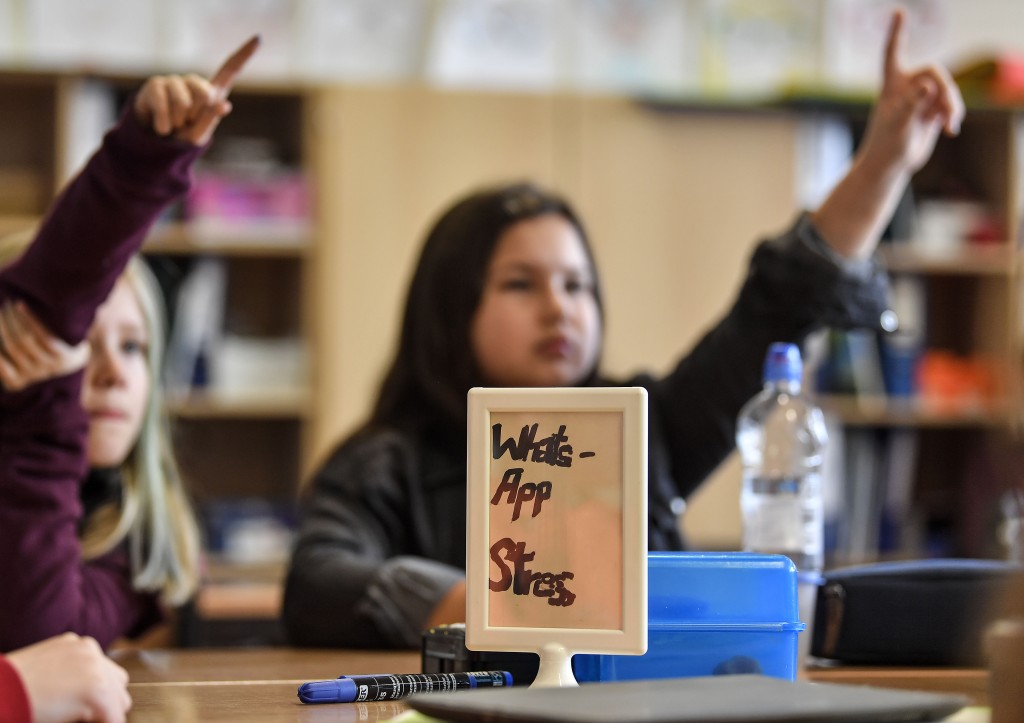 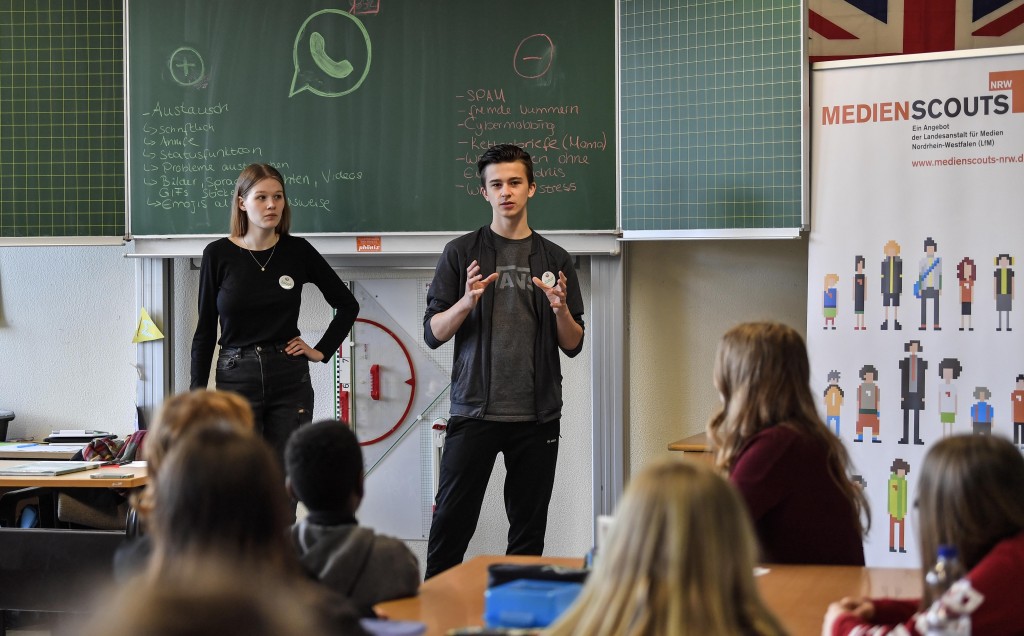 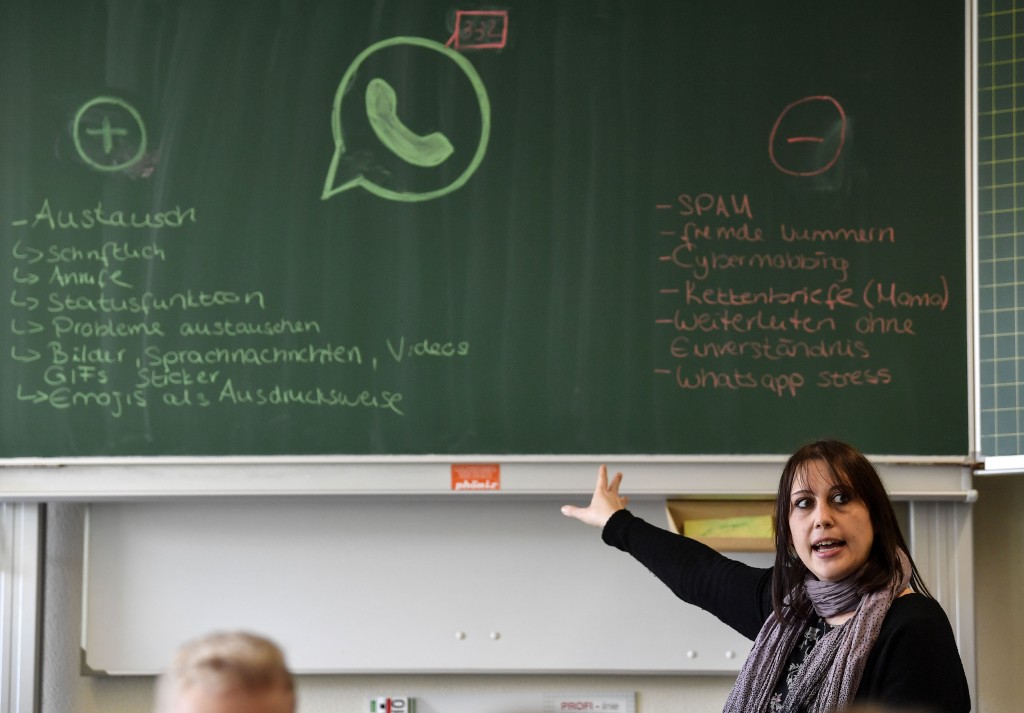 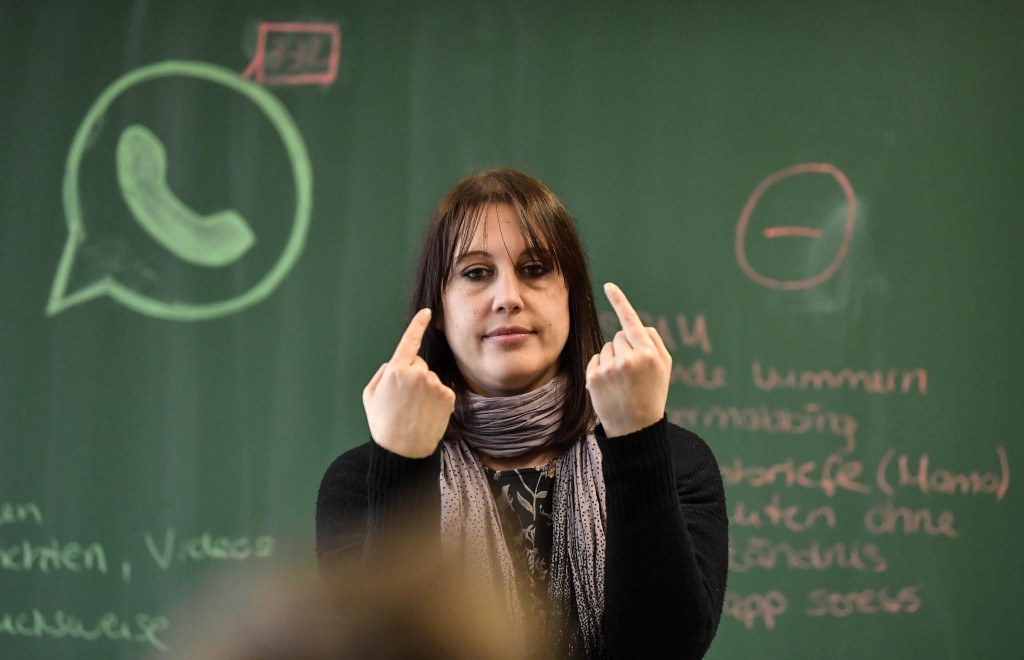 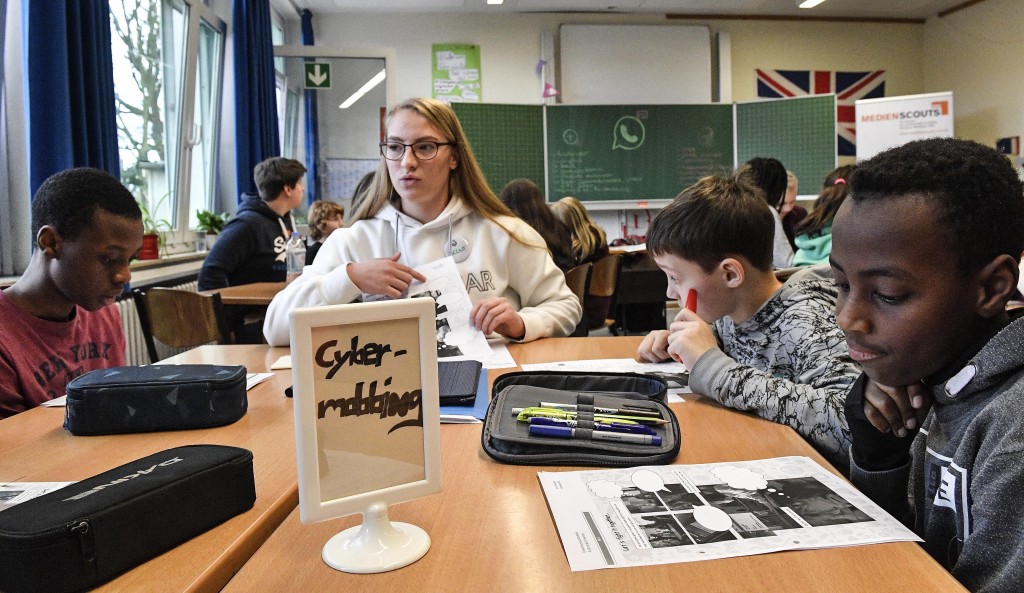 ESSEN, Germany (AP) — How do you teach tech-savvy kids to safely navigate the digital world? In Germany, you bring in the teenagers.

On a recent day, 18-year-old Chantal Hueben stood in front of a group of restless fifth-graders and asked them to brainstorm about the messaging program Whatsapp, which most are just starting to use to participate in a group chat for their class. They spoke about themes like cyberbullying and what material is OK to post.

"Many are not really aware yet of the impact their messages can have on others," says Hueben, dressed all in black except for white sneakers. "We're teaching them not to post anything private on the class chat, not to send photos of others and not to insult anybody."

The session at the Gesamtschule Borbeck high school, in the western German city of Essen, is part of a large-scale program in which teenagers teach their younger schoolmates how to stay safe and sane online.

As they grow older, they also participate in workshops about media copyright issues or sexting, and, at the end of eighth grade, they take a test to get a laminated "mobile license" that allows them to use their smartphones at certain times at school.

The exam includes 10 multiple choice questions. One asks what to do when somebody sends an embarrassing Snapchat photo of a fellow student. The answer, of course, is to not forward the picture to others.

Over two-thirds of kids in Germany have smartphones by the age of 11 and, like children around the world, many are stressed by the huge number of messages they receive and don't know how to handle inappropriate and hurtful posts. With many parents and teachers lacking in digital skills and unable to relate to what it means to grow up with a smartphone, German authorities decided peer education was the best approach.

At Borbeck, which has about 1,000 students and is considered one of the most advanced schools in Germany when it comes to teaching digital skills, there are 32 students teaching in the "Medienscouts," or media scouts, program.

"We're also students, so we have this buddy and role model relationship with the younger kids that definitely motivates them to learn from us," Hueben says.

With the program, Germany is ahead of many other countries, where "media skills" are often taught by teachers and are more about how to read or watch news media rather than the personal impact.

It was founded in 2011 by public authorities in the western state of North Rhine-Westphalia. In Germany, education is managed by the country's 16 separate states, and now 11 of them have established similar programs in hundreds of schools.

In North Rhine-Westphalia, 766 schools have so far participated in the media scout program. More than 3,120 high school students have been trained as scouts and around 1,500 teachers or guidance counselors are helping the kids grow up as mature cyber world citizens.

"It would be great if the media scouts would be established at every high school," said Sven Hulvershorn from the media authority agency for the western German state, who oversees the media scout program. "We're not there yet, but we're working on it."

Beyond teaching children how to deal with the daily stress of digital communications, experts in Germany agree there's a need to coach them in how to protect themselves from online bullying, sexual predators or fake news.

"We first had a complete ban on phones in our school," explained teacher Vera Servaty, who is the media scouts' guidance counselor at Borbeck high school. "But the reality is that media is a central aspect of the students' lives. If the school doesn't help them navigate the media and the parents aren't of any help either then how should the children learn responsible ways with the digital world?"

The program is more developed than in many other countries. In the United States, many schools have not fully embraced peer-to-peer tutoring in social media, says Liz Kolb, a professor of education technology at the University of Michigan.

U.S. schools are required by a federal program to teach appropriate online behavior, but that is done by teachers and while some schools offer peer-to-peer tutoring, it is not on the scale of what Germany is doing.

"Schools are pretty much figuring out their own way because there really is no strong mandate they have to have a certain curriculum or specific goals," Kolb said of the U.S. "It's definitely needed and schools are seeing that it's needed, they just don't know how to go about fitting it into the already tight curriculum they have."

At Borbeck high school, the media scouts spend several hours teaching the fifth graders how not to let WhatsApp take over their lives. Beyond practical tricks, like turning off the setting that lets the sender know if a message has been read, the older students also talk with the fifth-graders about learning how to take breaks from their smart phone.

He said he often felt overwhelmed by the hundreds of WhatsApp messages he receives every day, most of them from schoolmates in the class group chat. He felt obliged to follow up on all of them out of fear of missing important information about homework or school activities.

After the WhatsApp workshop, Scharenberg said he felt more confident about taking a break from messaging.

"I will put down my phone in the kitchen when I come home from school," he said, explaining his new strategy. "Before I go to sleep, I will check all the messages. But I only reply if I really feel like it."

Michael Melia in Hartford, Connecticut, contributed to this report.