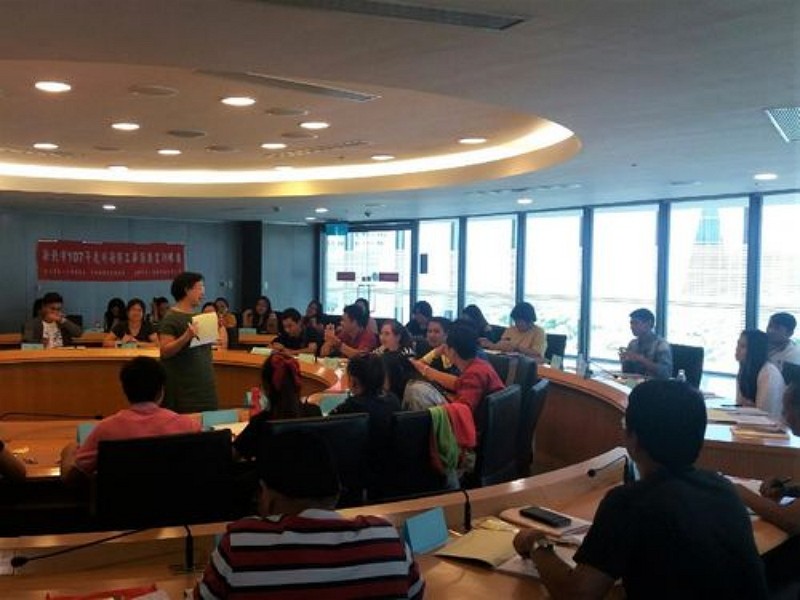 The classes will begin on July 7 and will be split into four sections catering to Indonesian, Vietnamese, Filipino and Thai workers, said Huang Yu-wen (黃郁雯), an official with the department's Foreign Workers Service Division.

The classes are grouped based on nationality because they rely on bilingual instructors who use their native tongue to help teach the the course material, Huang told CNA.

There will be about 30 students in each class, which will involve phonetic symbols, communication and dialogue, reading, and learning by singing, Huang said.

Each group will initially go through a basic beginners program every Sunday for seven weeks from July 7 to Aug. 18 before progressing onto an advanced program consisting of six classes from August to September, she said.

By offering Chinese classes to foreign workers free of charge, the program hopes to minimize language barriers and give the workers an in-depth understanding of local Taiwanese customs and living habits, Huang said.

Participation is limited to foreign migrant workers in New Taipei. For more information on the registration process, they can call the number 02-2366-1368, Huang said.

The course will follow on from a similar program last year, which students described in a video uploaded on YouTube.

In the video, a Thai foreign migrant worker named Ah Min said students should not be afraid of joining the classes if they don't know the language well at first and look forward to the benefits it will bring afterwards.

"After you learn Mandarin, you can speak and communicate with your (Taiwanese) friends and employer to understand what they are talking about. It feels great," he said.

Hartini, a migrant caregiver from Indonesia, said she was very happy with the course and praised the instructors for putting a lot of effort into teaching the class.

"The program was very successful and through the course I met many new friends," she said.

The one other migrant worker in the city not from those four countries was from Malaysia.