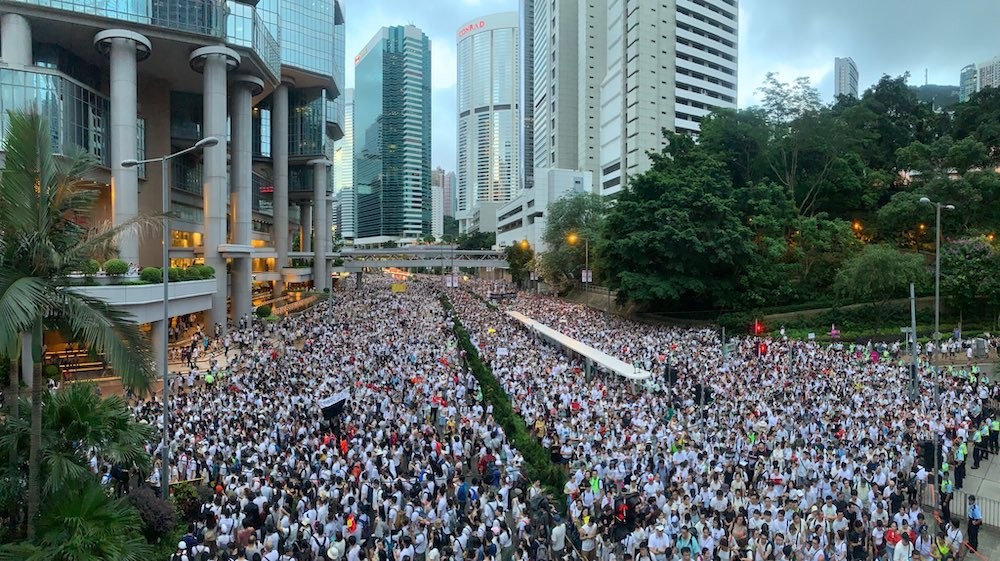 KAOHSIUNG (Taiwan News) -- There were stirring scenes in Hong Kong on Sunday as the people of the proud City-state took to the streets to oppose the systematic erosion of their rights by Communist China.

It is estimated that well over a million people took part in protests against a new law proposed by the Beijing-controlled legislature that would permit extradition of criminal suspects to China, despite that country’s deeply flawed and unjust judicial system.

To put the numbers in context, a million people would represent more than one in eight people in Hong Kong and would make it the largest single protest in Hong Kong since a similar number took to the streets thirty years ago to protest the CCP’s massacre of democracy activists in Tiananmen Square. It is nearly twice as many as are estimated to have taken part in the Umbrella Revolution back in 2014.

This serves to illustrate all too clearly the strength of feeling among the people against the growing Chinese incursion into Hong Kong affairs and the direction that the so-called ‘one country, two systems’ model is moving.

The likely effect of the protests

The protests themselves were a spectacular and awe-inspiring example of public protest against authoritarianism. Even the sporadic outburst of violence and police brutality towards the end of the protests couldn’t put a dampener on what felt like a seismic moment in Hong Kong’s history.

The question is whether this huge groundswell of public action can really have any tangible effects.

Hong Kong’s current Chief Executive, Carrie Lam (林鄭月娥) is, to put none too fine a point on it, a Beijing puppet. She was elected from an entirely pro-Beijing shortlist and formally appointed to the role by the Chinese Communist Party (CCP). All of her decisions to date illustrate that she acts to do the bidding of the CCP.

It goes without saying that the CCP has no interest in the views of the people they govern and Carrie Lam clearly demonstrates such a principle.

She has already come out to say that the extradition law will proceed as planned despite the huge protests and the global condemnation of the new law from governments around the world.

Further protests are planned on Wednesday, but even if these achieve similar numbers, it is almost inconceivable that the law will be dropped. When a law is proposed in Hong Kong’s legislature it is almost guaranteed that it will be passed.

The last British Governor of Hong Kong, Chris Patten told the British press that he condemns the new proposals. He has described the extradition law as “a terrible blow … against the rule of law, against Hong Kong’s stability and security, against Hong Kong’s position as a great international trading hub.”

He went on to describe Lam’s defense of the proposals as “absolute nonsense” and said the proposal is in clear breach of China and Hong Kong’s commitments made during the handover in 1997.

Given China’s flagrant dismissal of any international comments about the situation in Hong Kong, it is unlikely that Patten’s comments will make much difference either.

Unless Carrie Lam (and the CCP) has an unlikely change of heart, these appalling new extradition laws are going to come into force. They mean that everyone in Hong Kong who opposes the Communist regime in China is at risk of extradition.

The same is true for everyone passing through Hong Kong, so anyone who supports Taiwanese independence should start looking for a different hub to fly through too.

The Taiwanese government has been quick to back the protestors and condemn the extradition law.

In a statement, President Tsai Ing-wen expressed support of the rule of law in Hong Kong. She said, “We stand with all freedom-loving people of Hong Kong. In their faces, we see the longing for freedom, and are reminded that Taiwan’s hard-earned democracy must be guarded & renewed by every generation.”

"As long as I’m President, ‘one country, two systems’ will never be an option,” she added.

Her comments are a powerful reminder to the people of Taiwan of what is potentially at stake for the whole of Taiwan in the coming few months.

With a sizable minority of Taiwanese people buying into the false narrative of Han Kuo-yu (韓國瑜) and the KMT, the future of Taiwan’s democracy and the freedoms of its people really are at stake.

Han has held covert meetings with the CCP and he backs a "one country two systems" model for Communist China's annexation of Taiwan. Most of his party would support this move too, even if they won’t say so blatantly in public for fear of alienating swing voters.

This is precisely why, when asked about the protests in Hong Kong, Han feigned ignorance of them.

Or perhaps he was ignorant of them. After all, if you have watched Taiwan’s TV news or read many Taiwanese newspapers, you could easily be forgiven for not being aware the protests took place at all.

Those that did cover the story buried it deep in the middle of their papers while TV news only gave them a few moments coverage right at the end of their bulletin.

This should come as no real surprise of course. As we reported a couple of weeks back, much of Taiwan’s supposedly free press takes a pro-Beijing editorial line and many take orders directly from CCP officials in Beijing.

As we noted at the time, Taiwan’s media is long overdue for some serious reform. The media's failure to provide substantial reporting of these huge anti-China protests in Hong Kong should hasten that process.

Make no mistake, the future vision that Han and the KMT have for Taiwan is to go down the same path as Hong Kong. Han would like nothing more than to be Beijing’s puppet President in Taipei. They believe this is a path of power and prosperity to be part of a global superpower.

But as the people of Hong Kong know all too well, that reality is one of fear, oppression, and the systematic erosion of their fundamental rights. The truth of the so-called "one country, two systems" model is that it means, at best, "one country, one-and-a-half systems." The CCP is essentially in control and what they say goes.

At this time, Taiwan must stand by its brothers and sisters in Hong Kong against the oppression of the Chinese Communist Regime and its puppet government in Hong Kong.

However, Taiwan must also heed the warnings from Hong Kong and continue to staunchly oppose the "one country, two systems" model and any Taiwanese politicians who advocate it here.