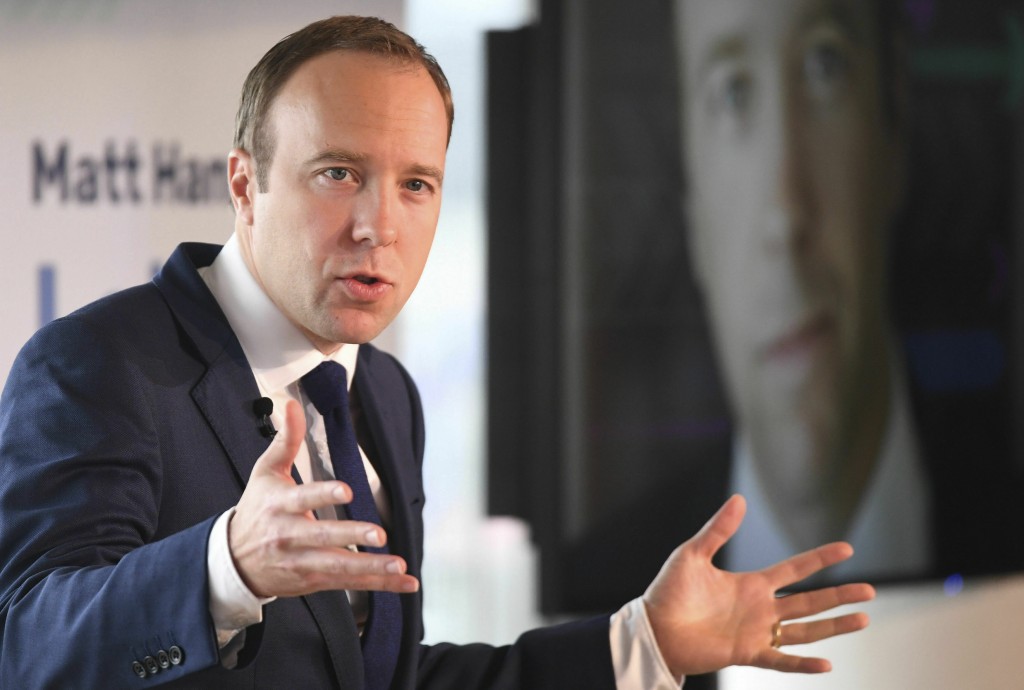 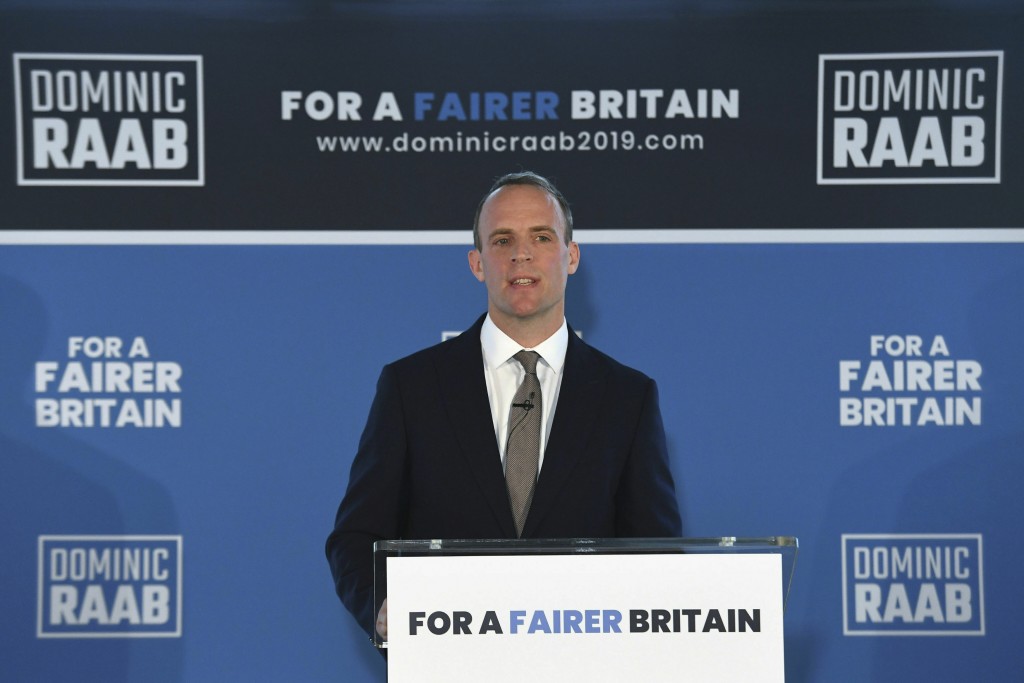 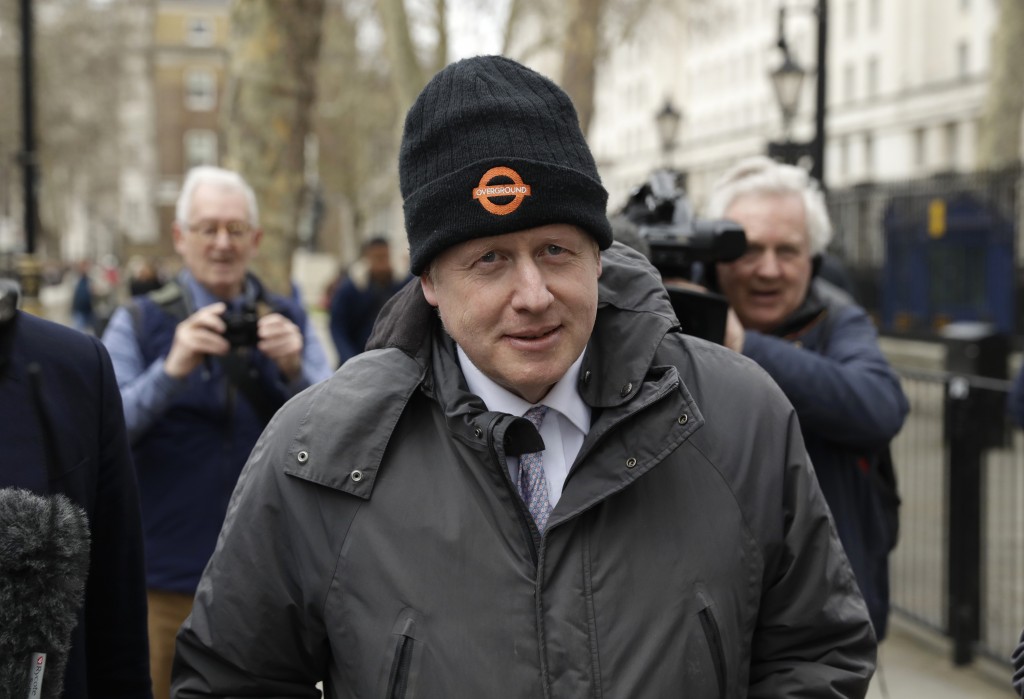 LONDON (AP) — Britain is set to get a new prime minister, but only members of the Conservative Party have a say in the decision. The Conservatives are holding an election to replace Prime Minister Theresa May, who resigned as party leader last week after failing to lead Britain out of the European Union on schedule.

Nominations close Monday, and so far 11 Conservative lawmakers have announced they are running to replace her.

A look at the contenders:

The former London mayor and foreign secretary adores the limelight and courts the media, tousling his blond hair to make it even more unruly and peppering his speeches with jokes, quips and Latin phrases. One of Britain's best-known politicians, he is popular with rank-and-file Conservative Party members who think he has the popular touch, and is currently the bookies' favorite to replace May.

A leading figure in the 2016 campaign to leave the European Union, Johnson takes a tough line on Brexit. He has vowed that Britain will quit the EU on Oct. 31 with or without an agreement, and threatened to withhold an agreed 39 billion pound ($50 billion) divorce payment if the bloc plays hardball. He's also promising a tax cut for middle- and high-income earners.

Hunt has held a variety of government posts and has been foreign secretary since Johnson resigned in JuIy over Brexit. Regarded as even-tempered and competent, he managed to navigate a heated contract dispute with doctors in the National Health Service when he was health secretary, securing a deal after a long-standing argument. Though an excellent communicator, some doubt he is flashy enough to excite the electorate.

Hunt backed the losing "remain" side during the 2016 EU membership referendum, but now says he will negotiate a better Brexit deal with the EU and lead the U.K. out of the bloc.

Like Johnson, Gove helped lead the campaign to leave the European Union, but scuttled his friend Johnson's bid to become prime minister in 2016 when he unexpectedly withdrew support and decided to run for the job himself — a move that gives him a lingering taint of treachery in the eyes of some Conservatives.

Gove has held several posts in May's government — he's currently environment secretary — and backed her Brexit policies even as former colleagues denounced May's withdrawal deal. That hurts him among hardcore Brexiteers, who believe he went soft by supporting May's deal.

Give is also facing pressure after acknowledging that he took cocaine more than once before he entered politics.

The former Brexit Secretary, who held the post from July to November, resigned in opposition to the divorce deal that May struck with the European Union. A firm Brexiteer, he says Britain has been "humiliated" by the EU and must not delay its departure beyond Oct. 31; he has even suggested he could suspend Parliament if it tried to delay or impede Brexit.

Raab also appears to be playing to the party's traditionalist wing, saying he is "probably not" a feminist and opposes making it easier for people to change their gender.

Javid's background as the son of Pakistani immigrants sets him apart from many of the other Conservative contenders. A former banker who was elected to Parliament in 2010, he is a champion of the free-market, libertarian wing of the party.

During the Brexit referendum of 2016, Javid was on the "remain" side but has since embraced Brexit, though some Brexiteers remain suspicious of his allegiances. He says he would make getting a new deal with the EU his "absolute priority" and does not favor walking away without an agreement.

As home secretary, responsible for immigration and borders, he has raised his profile in recent months by taking aggressive action to curtail the arrival of small boats carrying migrants across the English Channel.

Health Secretary Matt Hancock pitches himself as the face of a younger, modernizing generation in the Conservative Party. Promising to deliver an energizing blend of social liberalism and economic dynamism, he says the Conservatives have to look beyond Brexit — a message that may be coming too soon for many in the party.

Leadsom, who campaigned in 2016 to leave the EU, quit as leader of the House of Commons last month over opposition to May's Brexit deal, helping to ensure the prime minister's downfall. She ran against May for Tory leader in 2016, quitting the race after receiving harsh criticism for saying motherhood helped make her qualified to lead; May has no children.

Leadsom rejects May's divorce agreement and says Britain should leave the EU on Oct. 31 with a series of mini-deals to ensure trade and travel can continue. Critics say this is wishful thinking since the bloc will not agree.

A longshot candidate, International Development Secretary Rory Stewart has seen his profile soar with a savvy campaign that saw him travelling the country talking to voters, and producing endearingly amateurish social media videos. He has the most eye-catching background of any candidate: a sometime tutor to Princes William and Harry, Stewart once walked across Afghanistan and was deputy governor of a province in Iraq after the 2003 U.S.-led invasion.

A former supporter of remaining in the EU, he now backs Brexit but appeals for compromise, saying Britain can't realistically leave the bloc without a divorce deal. He has slammed the promises of Johnson and other Brexit-backers as unrealistic.

A former TV presenter and Cabinet minister, McVey is an uncompromising Brexiteer and says she has the skills to connect with blue-collar Conservatives. She says Britain must leave the EU on Oct. 31 no matter what and, like Raab, she hasn't ruled out suspending Parliament to force through a no-deal Brexit.

A rare pro-EU voice in the contest, Gyimah quit as a junior minister last year so he could campaign for a new public referendum on Britain's membership in the bloc. This makes him an extreme outsider in the contest, which will be decided by a largely pro-Brexit party membership.

A former Conservative whip in Parliament, Harper is one of the lesser-known contenders. He is trying to turn that to his advantage, arguing that he represents a clean break from May's administration, which has tried and failed to deliver Brexit.