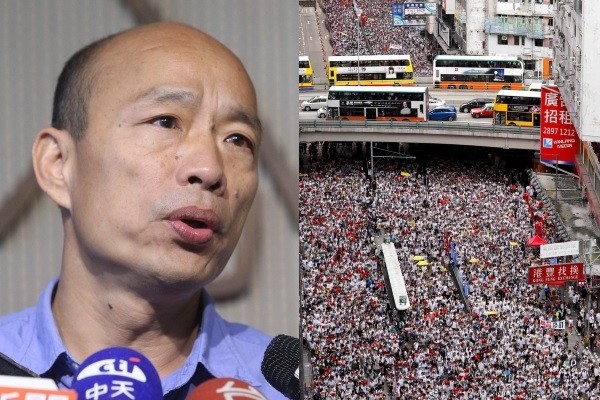 TAIPEI (Taiwan News) -- As the world's attention turned to up to one million people in Hong Kong marching to protest a controversial extradition bill on Sunday (June 9), itinerant Kaohsiung Mayor and Kuomingtang presidential candidate Han Kuo-yu told reporters that he did not know anything about the "parade," angering many netizens.

On Sunday, while 1 million Hong Kong citizens took to the streets to protest against a proposed bill that would allow the extradition of fugitives in Hong Kong to China, according to organizers, Taiwanese reporters asked Han's take on the rally. Han simply said, "I don't know about the Hong Kong parade. I don't know, I'm not aware," reported TVBS.

Given that the attention of the world was focussed on the issue including many people on both sides of the strait because of its potential long-term implications for Taiwan, many netizens were annoyed at Han's dismissive response. Many netizens criticized Han for constantly speaking in a blunt manner about Taiwan, but suddenly becoming mute when it came to the massive protests occurring across the strait.

Many netizens took to the Facebook page @nokmtisgood to heap criticism on Han for his tone-deaf reaction to events in Hong Kong:

"Han Kuo-yu really softened up when he met with the Communist Party of China."

"He is not a common citizen, he is a common Communist."

"Don't press him like that. The campaign funds for the presidency depend on the other side [of the strait]."

"When you ask him about the June 4 Tiananmen Square Incident, he'd probably tell you that nothing happened."

In an apparent attempt at damage control on Monday (June 10), the Kaohsiung City Government issued a six-point statement emphasizing that the vast majority of Taiwanese people believe that Hong Kong's "one country, two systems" framework whether successful or not is not applicable to Taiwan. In the sixth point, Han listed "three unquestionable resolutions."

According to the Kaohsiung City Government Information Bureau, the six points are as follows:

"(1) The rule of law in Hong Kong has always attracted the attention of Hong Kong society and all walks of life.

(2) According to the Basic Law of Hong Kong, Hong Kong has the power of final adjudication.

(5) As a sovereign country, the Republic of China (Taiwan) is totally different from Hong Kong's past history and political reality. The overwhelming majority of Taiwan people believe that Hong Kong's 'one country, two systems,' whether successful or unsuccessful, is not applicable to Taiwan. Although we have no confidence in the DPP's governance, we are confident in Taiwan's democracy and people.