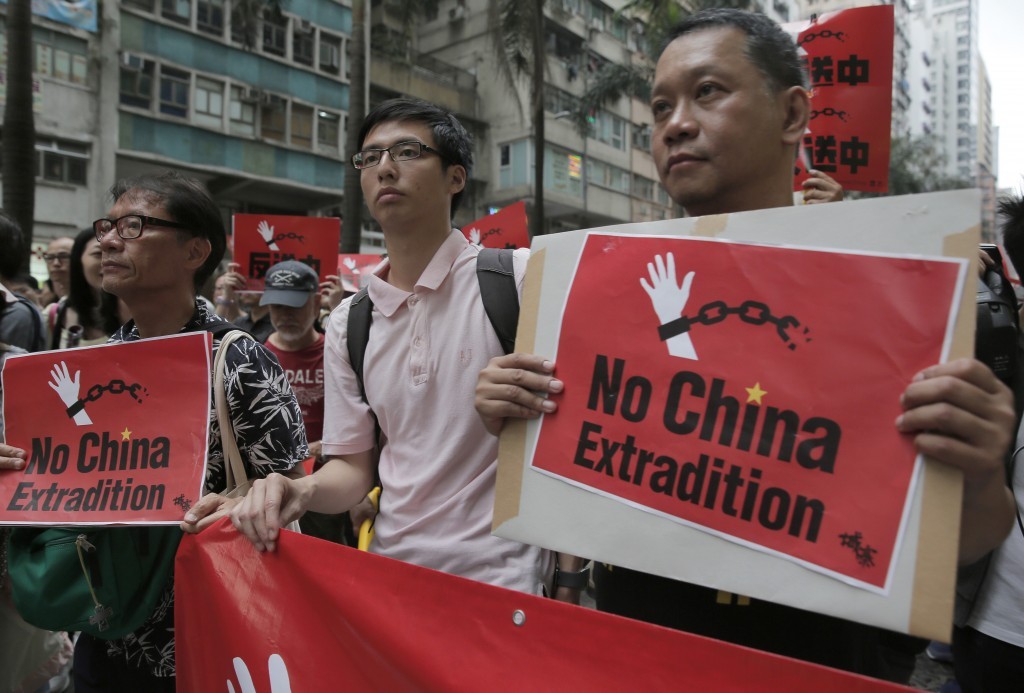 TAIPEI (Taiwan News) – Authorities in Hong Kong are on high alert for a protest expected to strike the city on Sunday (June 9) over mounting public anger with proposed amendments to the city’s extradition law.

Some reports estimate that activists joining demonstrations throughout the city may number between 300,000 and 500, 000. In anticipation of unrest, police were busy Saturday and Sunday morning erecting barricades around the likely route of a protest march being organized by democratic activists.

The march is anticipated to kick off around 2:30 p.m. on Sunday afternoon. At least 2,000 police officers from the special Police Tactical Unit (PTU) have been deployed to monitor the day’s activities.

The Victoria Park and Causeway Bay portions of the city will be closed to through traffic from 1:30 p.m., with some tramlines and metro stops suspended, and most buses diverted from the area, reports UDN.

Young activists have issued a call to everyone in the city to come out and protest in order to protect the rights and freedoms supposedly guaranteed under the Basic Law. Many see this as a last chance to save the independent judiciary of Hong Kong, and maintain an important aspect of Hong Kong's autonomy.

Adding to the tension, at least three pro-democracy organizations have declared that there will be an“important announcement” and possible coordinated action taken to draw attention to China’s increasing authoritarianism and repressive tactics in Hong Kong.

The Demosistō political party, the Studentlocalism student union, and the Hong Kong Independence Union have all declared that important news will be announced, likely to follow the protest march. The possibility of coordinated action between pro-democracy groups has put the authorities and law enforcement agencies of the city on edge.

Liberty Times reports that all the city’s universities and government buildings have been placed on high alert ahead of the day’s protest activity. At some universities, black banners have appeared declaring opposition to the proposed amendment that would allow for rapid extradition of suspects from Hong Kong to China. On Friday evening there were two reported petrol attacks that targeted police around the Wan Chai area, however, police have since stated these were not connected to the anti-extradition law protests.

The proposed amendments to the extradition law were proposed in February, ostensibly to create a legal means of extraditing a Hong Kong murder suspect to Taiwan for trial.

However, the language of the amendment, which was proposed to the Hong Kong Legislative Council (LegCo) by the city’s Security Bureau, contains very dubious language that could place Hong Kong citizens, or even foreign visitors in Hong Kong at high risk of detention and immediate extradition to China for trial on criminal charges according to the laws of the People’s Republic of China.

Previously in late April, thousands of protesters took to the streets to voice their opposition to the changes proposed in the LegCo. Sunday's turnout is expected to surpass the previous march.

Officials of Taiwan’s Mainland Affairs Council have warned that if Hong Kong proceeds with the change in the extradition law, then Taipei may be forced to issue a permanent travel warning for Taiwanese citizens going to or transferring flights in Hong Kong.