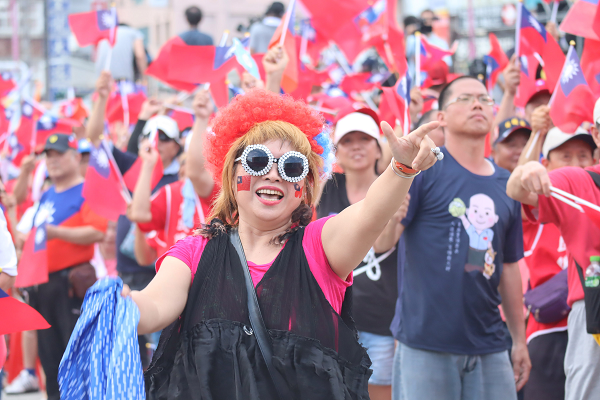 Despite temperatures of over 30 degrees Celsius in the afternoon, Han, a strong presidential candidate from the opposition Kuomintang (KMT), attracted supporters from across the nation.

According to the rally organizer, more than 150,000 people gathered, mostly dressed in red and waving Republic of China flags. The police department did not give an official estimate.

Accompanied by his wife Lee Chia-fen (李佳芬), Han walked through the crowd to the stage, while supporters called out "Hello! Mr. president!"

In a speech, Han pledged to boost Hualien's tourism after lashing out at the ruling Democratic Progressive Party (DPP), accusing it of failing to taking care of the people.

"Hualien and Taitung have been neglected for too long," Han said, adding that it is the main reason he decided to hold a rally in Hualien.

If elected, Han said, he will push an improvement project for the Suhua Highway, a 118-kilometer route that hugs Taiwan's cliffs along the east coast from Su'ao to Hualien.

The development of Hualien, Taitung and Yilan can no longer be ignored, Han contended, stressing that under his leadership, the people there will have better lives.

The 61-year-old mayor, who was elected in November last year, also said he will ensure cross-Taiwan Strait stability.

Chou Yung-hung (鄒永宏), a former head of the KMT's Hualien division, estimated that nearly 100 buses transported supporters from central and southern Taiwan to the city.

The KMT is set to release a final list of candidates to take part in its presidential primary June 10, but former Legislative Speaker Wang Jin-pyng (王金平), one of the party's aspiring candidates, announced Thursday that he will not take part in the primary.

However, Wang said he has not yet decided if he will run as an independent candidate.

The KMT plans to select its 2020 presidential candidate based on the results of five public opinion polls conducted by different polling firms July 5-15. The winner will be officially announced July 28.

Taiwan is scheduled to hold its next general election Jan. 11, 2020, which will also include a vote for the Legislature's 113 seats.